I think we are all ready for spring, something we have been waiting on for a long time, with an opportunity to get outside and enjoy some of the warmer weather.

As it gets closer to spring, this is when I am in the woods, pre-season turkey scouting. While I am out there in the woods, scouting for turkey sign, I am also keeping an eye out for deer sheds, Shed Hunting.

For those of you that have not hunted sheds, it is a great thing to do this time of the year. Sheds are the buck’s antlers from the previous year shed or dropped after the rut.

Bucks shed their headgear/rack/antlers annually and if you can beat the rodents and other critters out there that chew on them to obtain a source of calcium, you will have the opportunity to find a shed or two.

A buck’s antler/rack is a lot different from cattle horns, which are hollow, as a deer’s rack consists of honey combed solid bone.

Pedicles, are a knobby nub protruding from the buck’s skull, this is where the new antler/rack grows and what supports the buck’s rack.

When bucks start to grow their new racks/antlers, they are no more than bony growths covered with skin and hair known as velvet.  They grow incredibly fast in 3 to 4 months, making them the fastest growing living tissue there is.

These pedicles are a permanent part of the buck’s forehead, the point where the antler comes off when shed.

If you find his sheds, he is still around, unless the winter did him in and once you have found his shed, you can start putting together your hunting plan for next season.

Once the rut is over, bucks no longer need their racks. They needed their rack during the used to attract and impress the does and most importantly to fight off other bucks trying to draw the females away from his harem.

It is a known fact that not all of the bucks will drop their racks at the same time.  Some will begin to lose them following the rut, when their hormone levels begin to drop. Generally, deer in the upper Midwest will shed their antlers in February and March. 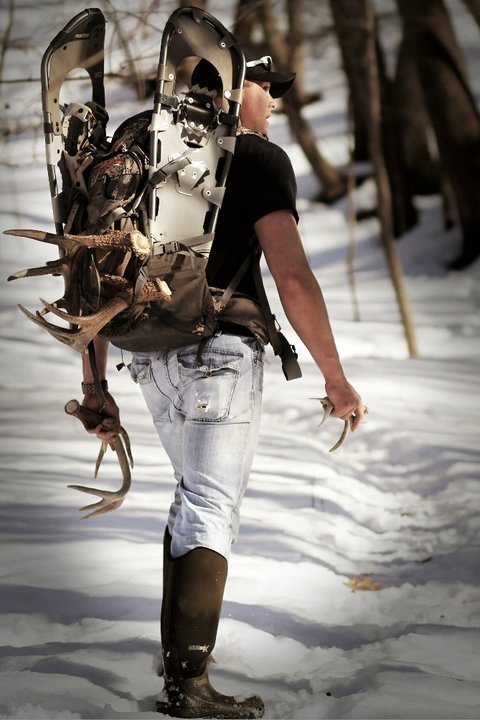 While scouting for turkeys, keep your eyes open for sheds, it’s a great way to find out which deer survived the winter. (Photo By Dustin Lutt)

There are several reasons deer shed their antlers, it allows the buck regeneration, or re-grow a new set of antlers. Others believe they shed, making it easier for them to make it through the winter, as winter, with its harsh conditions and less food make it tough for a deer coming out of the rut to survive.

When the buck sheds its antlers: it helps them to conserve energy while eliminating excess weight.

Antlers grow rapidly from their (base) when the buck is in velvet during the spring and summer. In a study by Jacobson and Griffin in1983, it was found that yearling could grow as much as a 3/4 inch in a week and adult bucks putting on up to 1 1/2 inches per week during peak growth. Their growth rate slows down during late summer. Blood fall as fall approaches causes the velvet’s to start to dry and when dry enough, velvet is removed by rubbing and thrashing on vegetation in as little as 24 hours.

If you have not hunted sheds before, a good place to start, looking would be to drive through the country, looking for those well-used deer trails where they cross the roads.

I have found heavily traveled trails in the snow or grass; those resembling hard-packed cattle, which lead from heavily wooded areas, coming over the road heading into the areas deer are feeding to be a good starting point.

Once you have located a well-used trail, get permission from the landowner to shed hunt on the ground and then formulate a plan.

The main spots I have found sheds were those near their bedding areas, along a route heading to an area where they are feeding and of course at their food sources.

You will find more sheds in areas where the deer feed, as when a buck feeds, there is a lot of up and down head movement, causing the antler to drop off

Another reason that you will find a good number of sheds near a food source is that they will spend a lot of time there during the winter months.

These feeding areas can be corn/bean fields, near haystacks, grain piles and in or near cattle feed lots, as deer know these areas offer easy access to a food supply.

While filming in Mississippi a few years back, my good friend Bubba Flannigan showed me how they hunt sheds in the south.

They leave feeders out year round for the deer and after the deer season ends about the time deer shed their antlers, in order to attracts the deer, they feed the deer oats. Above the opening to the feeder where the deer’s antler would hit as they feed, they attach a piece of chicken wire and when a buck sticks his head into the feeder to get at the oats, the wire knocks the antler off.

On one feeder, there were nineteen sheds, the folks down south use this method to track the deer using their land, that made it through the season and to help manage their herd.

They use the sheds to decorate their homes and cabins, making decorative lights and other items that some folks sell in their gift shops.

Timing is everything when using this method as if it has attached too early, the buck may be entangled in the wire.

Hunting sheds is about like hunting mushrooms, as you need to take your time and walk through the fields and hills slowly.

Do not be in a big hurry when shed hunting as even a small amount of snow or leaves can cover a shed, making them impossible to see until you are right on top of them. If they have been on the ground long, they will have faded and a dull gray color, making them particularly hard to see in sandy soils.

This is the time of the year, when folks just want to be outside and do something, making shed hunting a great opportunity for you to spend a little time in the hills and woods, enjoying the outdoors while looking for one of Mother Nature’s most beautiful art forms.

Fronts, the Good, the Bad and the Ugly By Gary Howey

Author with Jim Klages, Chamberlain, Dakota Prairie Guide Service with a stringer of walleyes he and author Gary Howey caught before a” Cold Front”...

END_OF_DOCUMENT_TOKEN_TO_BE_REPLACED

LINCOLN, Neb. – The Nebraska Game and Parks Commission will accept lottery applications for mountain lion permits Nov. 2 – Dec. 9, 2020, for the...

END_OF_DOCUMENT_TOKEN_TO_BE_REPLACED

Identifying the Where, When, and How of Animal Tracks By The Game Keepers of Mossy Oak

The following is our go-to breakdown of everything you need to know when identifying the where, when, and how of animal tracks in the...