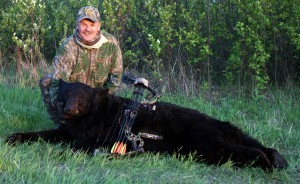 Howey will continue helping as a consultant and occasionally co-Host some fishing shows.

Tired of seeing the same old outdoor shows with the same host hunting the same ranch or fishing the same pond or lake for one species of fish?

Well if you’re looking for the ultimate Outdoor Adventure, one featuring real outdoorsmen and women who spend thousands of hours in the outdoors hunting different game and fishing all species throughout the United States and Canada, then Outdoorsmen Adventures is what you’re looking for.

Unlike some shows where the host stands or sits in front of their trophy wall or in a sponsor’s vehicle, spending the majority of the show talking about hunting and fishing,  on Outdoorsmen Adventures you’re not going to see a whole lot of of the indoors or standing around and talking, you’re going to see hunting,  fishing and the outdoors as it really is. 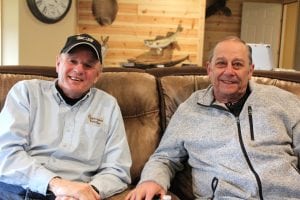 Outdoorsmen Adventures is an award-winning weekly outdoor program beginning its 30th season in 2020. It can be seen on 62 markets each week throughout the upper Midwest as well as on live Internet at www.MyOutdoorTV.com.

Co-hosts Gary Howey and Larry Myhre are former hunting and fishing guides, full-time outdoor communicators, Active members of the Association of Great Lakes Outdoor Writers Association (AGLOW), and have both inducted into the National Freshwater Fishing Hall of Fame. They and Team Outdoorsmen Adventures members will take you along as they go to some of the hottest hunting and fishing locations throughout the Midwest and Canada.

Join our Team as they probe the depths of the lakes in South Dakota’s, Nebraska, Minnesota,  Iowa, Manitoba and Ontario as well as the Missouri River and its reservoirs, Lake Oahe, Lake Sharpe, Lake Francis Case and Lewis & Clark Lake for walleye, sauger, bass paddlefish, and catfish. You’ll also find the fishing on both the open water and hard water seasons for walleye and perch on the Glacial Lakes of South Dakota, North Dakota’s Devils Lake, Minnesota’s Mille Lacs and Lake of the Woods.

On these fishing excursions, our Team members will show you what it takes and how to locate and catch monster perch, walleyes, catfish, and bass. Outdoorsmen Adventures will teach you how to rig up and what to use to catch fish and the types of tactics it takes to land that trophy fish.

The methods they use will include jigs, live-bait rigs, trolling lead core line, planer boards, downriggers, and slip bobbers. The things you’ll see and learn on Outdoorsmen Adventures will help you to become a better angler no matter what season, species of fish you’re after, or body of water you’re on.

Team Outdoorsmen Adventures members are some of the most successful outdoorsmen and women in the upper Midwest and they’ll show you what it takes and how to catch the fish. On the show, you’ll learn how to fish lakes, reservoirs, and rivers as well as the methods used to catch fish calling these bodies of water home throughout the year.

Join us as we hunt Upland  Game, Waterfowl, and Big Game, pursuing pheasants, ducks- geese, turkey,  bear, deer, antelope, and predators as we film in some of the finest hunting areas in the Midwest.

No matter what you hunt for or how you hunt, we’ll have something for you, we’ll be in the field and on the water with shotgun, rifle, muzzle-loader, and bow.

On Outdoorsmen Adventures, you’re going to learn what it takes to make your next hunting and fishing trip successful.  We want to teach you the methods that will make your next trip on the water or in the field a great one.

Outdoorsmen Adventures wants to remind you to support the brave men and women that are currently in the service and those who have served to defend our country our way of life. The people of the armed forces are very important to us and our host, as Gary spent many years in the regular Army serving in Germany and Viet Nam as well as in the Iowa and Nebraska National Guard.

He knows all the sacrifices they and their families are making in order to defend our freedom and that of our country. They need our support and that of the entire country.

Politics shouldn’t be brought into the equation when it comes to supporting our troops! No matter what party you belong to, drop the politics, and support them as Americans. Outdoorsmen Adventures has several shows planned with veterans, including those with the Paralyzed Veteran’s Of America and Wounded Warrior Guide Service.

We at Outdoorsmen Productions will do all we can to let the men and women of the armed forces know we appreciate all they’ve done for us and our country.

On the show, you won’t see us standing in front of a trophy wall or leaning up against an ATV or truck telling you how great our trip was, because we know you want to see things that are going on in the outdoors.

Outdoorsmen Adventures can be seen throughout the year in the Midwest on broadcast, cable, Direct TV, the Dish Network, and on live internet. We’re syndicated on Fox, ABC, NBC, CBS, UPN, PAX, MyUTV, Ind., CW, and Cable One where Outdoorsmen Adventures Television can be seen sixty-two times a week throughout the upper Midwest as well as on the Internet on the Outdoor Channels www.MyoutdoorTV.com