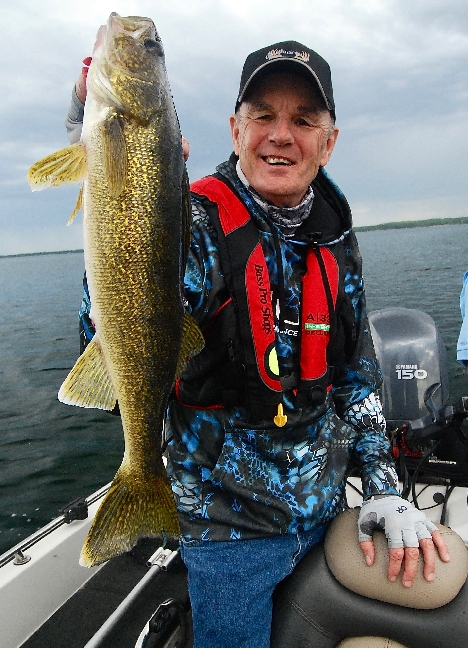 With the warming weather the walleye bite will pick up, Gary Howey, Hartington, Neb. took this walleye in the spring using a jig while fishing on Lake Francis Case. (Larry Myhre Photo)

This last week or so has been decent enough that anglers where stacked up below the dams of the Missouri.

Many were fishing just below the dams while others, in order to beat the crowd moved down river.

The methods they were using varied from jigging, live bait rigging to trolling crankbaits on three-way rigs.

Those jigging were probing the depths with light jigs tipped with minnow, those using live bait rigs, with some using Northland Roach Walker “quick remove” Sinkers on a live bait rig, allowing them to start with a heavier sinker and after having no luck or getting snagged a lot, they could quickly change the weight they were using by simply opening up the eye and reattaching a lighter sinker.

Others were vertically jigging a live bait rig, holding over the fish they located on their locator, using a split shot for a weight along with a couple of foot snell, baited with a minnow.

Those anglers trolling crankbaits, were using a three-way swivels, with one attached to the main line, the second to three foot or so of line with a floating crankbait tied to it, the third swivel, their dropper line was a lighter test mono or large rubber band that dropped down to the weight, anchoring the rig to the bottom, with the rig slowly trolled upstream.

The lighter dropper line or rubber band, allowed the angler to pop the weight loose or break the weight off, making it easier and much quicker to get back to fishing as all they needed to do was reattach a weight and they were back in business.

I love to fish with a jig, but will put away my jigs when bottom bouncers and spinners start to work well, I really like the Northland’s Butterfly Blade Super Death Rig, this spinner can be slow trolled, pulled at slower speeds than other spinners and still get plenty of attraction action from the blade.

We’ve used them on several of the Missouri reservoirs and had excellent luck when the fish wanted a slow presentation, where other spinners didn’t want to work when slow trolled

Another thing that some anglers have been afraid to try while trolling crankbaits are the Off Shore Planer Boards, that may look complicated but aren’t.

As things warm up, fish will become more active, with all of the Missouri River reservoirs beginning to see better fishing.

Last night, just before sunset, I was out and about scouting for turkeys as the youth turkey season in Nebraska opens up on the eleventh where I’ll have a young kid out on his first spring turkey hunt.

As there was rain in the forecast for the following week, I needed to get out while some of the minimum maintenance roads I needed to travel on were still passable.

I checked out five locations, saw one bird along a cedar shelter-belt and a group of birds near a house, not what I expected, but you have to start somewhere.

Those of you that didn’t get out earlier before everything greens up with the vegetation getting taller, may still have an opportunity to look for some sheds, a friend of mine on Facebook was out last week and he and his kids found several really nice sheds.

I’ve been busy preparing my boat for spring fishing and believe have everything installed and check so soon, I’ll be on the water.

With the gas prices going down, last week I filled, my boat can gas up as well as my reserve five gallon can.

Because oil prices are so low, look to see gas prices to go even lower, which is good for those of us who are out and about fishing, or just out in the outdoors, enjoying the warmer weather?

This pandemic that’s going on has really changed our lives in America, we need to take care as, it’s nothing to mess around with, recently there were four cases in Yankton County as well as one in Knox in Nebraska.

The outdoors is a great place for social distancing and an opportunity to soak up some of the sun’s rays and to just “Get away” from it all.

Not too far away we’ll start to see the ground warming up as the mushroom and asparagus hunting season arrives, giving us another reason to go out and enjoy the great outdoors.

I’m anxious to get outdoors to enjoy what Mother Nature has in store for us, wetting a line to see just how good the spring bite is, and if it isn’t, I’ll figure a way to enjoy my time in the outdoors.