(Editor’s note: This story is copyrighted, trademarked and otherwise protected from use by morning radio talk show hosts desperate for fresh topics.)

Perhaps you have heard about “The Fabulous Ice Fly.”

As the story goes, a Minnesota ice angler years ago formulated a recipe for a home-tied fly which he used to decimate the panfish population of many lakes.

The whole thing was a huge scandal which, unfortunately, was not reported in the sporting press because a score was not involved.

However, the sudden disappearance of panfish in hundreds of Minnesota lakes caused the DNR to spring into action. It took only twenty years for them to place restrictive possession limits on bluegills, perch, crappies and, amazingly enough, rock bass.

To escape prosecution for plundering the resource, the angler moved to Sioux City where he thrived in obscurity and tried, in vain, to give up low pursuits such as fishing, drinking and stealing monofilament from anglers who leave lines unattended.

I, too, considered the whole thing just a rumor until the late 1970s when I actually met the guy on a night crappie trip to Brown’s Lake.

It was mid-February, and so cold that I occasionally reached inside my parka to sip from the flask of bourbon I kept there for just such emergencies. Suddenly, I noticed my bobber getting lower and lower in the water.

No, it wasn’t a bite. Incredibly, the water level actually seemed to be dropping.

I was about to reach for the flask again when I heard someone screaming and splashing.

Yes, splashing. The ice had gone out just east of the boat ramp. Someone was in the water.

To make a long story short, I saved his life. His name, however, must remain undisclosed due to newspaper confidentiality rules. While we warmed up in my car with the heater full blast he told me the story of the fly and, to show his gratitude, gifted me with three of them.

Being a fly tyer, it was easy for me to replicate the flies and before long word of my success on the ice spread as far as Hartington, Neb., where Gary Howey, at the time editor and publisher of the Outdoorsmen newspaper and who now, through a series of typos and other unfortunate turns of events, has become a television producer, began begging me shamelessly for the flies. 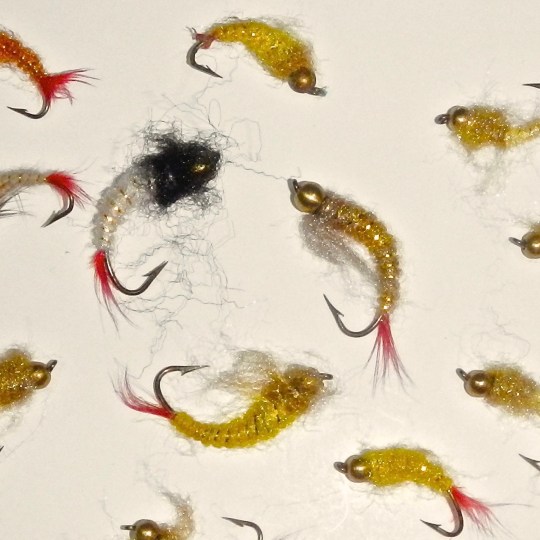 To appease him I sent a few flies with the following letter based on my conversation with the fisherman and months of my own investigative reporting resulting in verification of certain facts.

Howey rushed the letter to press without my permission, giving new life to this doubtful tale and causing much anguish among his more sensitive readers.

These are the fabled ice flies. They were invented in 1968 by a man named Lawrence Beam (no relation to Jim) who used them to, literally, fish out a lake in northern Minnesota called Lac de Pisces. In fact, the poundage of bluegills which Lawrence removed from the lake caused the water level to fall four feet below the ice.

In due course, some 15,000 ice fishing shacks inhabited by nearly 17,000 piscators and drunks fell into the water when the ice collapsed. All drowned except for four whose empty brandy bottles kept them afloat until help arrived.

Lawrence then moved to Old Crow Bay on Lake Big Kahoona near International Falls. He changed his name to avoid liability lawsuits stemming from relatives of the 16,996 who perished in Lac de Pisces.

Here, history becomes a bit fogged, but it is believed Lawrence was one and the same with a derelict named Lanny Daniels (no relation to Jack). Daniels was once found passed out on Big Kahoona where he had lain on the ice for five days in sub-zero temperatures. When thawed, Lanny appeared to be OK except for a slight, uncontrollable shiver, which it is said he retains to this day.

In 1976, a funny thing happened. The ice on Big Kahoona collapsed causing 12,000 fishing derelicts to drown in water which was ascertained to be at least six feet below ice level when the tragedy occurred. Ironically, at about the same time, a local commercial fishing firm was seen to prosper and its stock jumped 14 points on the New York Stock Exchange. It had found, it seems, a ready outlet for jumbo bluegill meat. Newspaper investigative reporters could not connect Daniels with the firm, but he was never seen around Big Kahoona again.

It is rumored that Daniels moved to Sioux City and changed his name to one which no one could pronounce or spell and went on to become an outdoor writer. Although no one has ever verified this, the ice did go out without explanation on Browns Lake in the middle of winter last year.

The secret to his ice flies has never been revealed and his identity (because of the FBI’s witness protection program) remains safe with me.

It’s been over 20 years since I wrote that letter and I republish it here to lay to rest certain theories, conjectures and just wildly erroneous stories which have been circulating recently among Iowa ice shacks.

I stand by the above as being a true rendition of my recollections of that night on the ice at Brown’s Lake. I should also point out that soon after the incident, I learned bourbon is not the best drink for cold weather. Schnapps, of course, is a much better choice, or perhaps, one of the flavored brandies. I was pretty young then and not nearly as sophisticated (or sober) as I have since become. I still, however, ice fish.

← Prev: Simple Stance and Mount Techniques to Improve your Shooting Accuracy. Next: "Of the Outdoors" Late Winter Scouting By Gary Howey →

Before putting it away, Winterize your Outboard By Gary Howey

Winterizing your outboard motor, is something all anglers and boaters should do before putting them away for winter. This motor, with the muffs and...

END_OF_DOCUMENT_TOKEN_TO_BE_REPLACED

That Fall Transition When things Turn upside Down   By Gary Howey

Gary Howey, Hartington, Nebraska with a Transition walleye taken using a heavier jig, with a stinger hook, tipped with a large Creek Chub....

END_OF_DOCUMENT_TOKEN_TO_BE_REPLACED

“The Nebraska Fishing and Hunting Bragging Board group has almost 20,000 members and will begin accepting nonresident hunters.”  ...