If you have ever had the opportunity to tangle with a big catfish, you realize how powerful this fish can be.

Catfish, not the prettiest fish, but are plentiful, accommodating, and fun to catch and great eating.

They are bottom-hugging creatures, whose eyesight is not the best, where they depend on their sense of smell and taste to find their food.  The barbells, those cats like whiskers protruding from their head and their lips, covered with taste receptors, help the catfish to locate a meal.

In the upper Midwest, you will find three species of catfish: the channel, blue and the flathead.

This article will deal with the largest population of catfish, a fish found in rivers, reservoirs, lakes and even farm ponds, the channel catfish.

Channel catfish are the most abundant catfish species in the upper Midwest and perhaps the entire U.S.

You will find them in the Glacial Lakes of South Dakota, below the dams of the Missouri River and on most bodies of water throughout the Midwest.

Channel catfish lie in the deeper holes in the lakes, and near the Missouri River dams below the spillway, behind the rubble below the turbines and in snag-infested areas adjacent to deeper water.

Catfish are opportunists when it comes to what they eat; feeding on just about anything, they can get their mouth around.

With what I do, television and radio, I have had the opportunity to fish for channel cats throughout the Midwest and in Canada and am fortunate to say that two of the channel catfish I caught were line class world records taken on cut bait made from suckers and goldeyes.

If you have followed my “Of the Outdoors” columns over the years, I preached about the use of lighter line and lighter baits.  However, when choosing the tackle to tangle with catfish, that theory goes out the window and when fishing for cats it is always best to go heavy because there is no finesse bait presentation when it comes to fishing for catfish.  This is especially true since most catfish are taken from areas where there are numerous snags and you never know how big of a fish might be that followed the scent trail to your bait.

When using heavy line on catfish, once you feel a bite, you will want to reel down towards the fish to take up any slack line before setting the hook, as heavier line will have more memory/coils than lighter line.

The rods I use for catfishing are long rod with a lot of backbone and a fast tip so you can detect those subtle bites backed up by large bait-casting reels.

When catfishing, you will find that even the larger cats do not grab your bait and run. They will nibble on it for some time, pulling as much of the bait from the hook before taking the remaining bait and hook into their mouth.

As far as line goes, I stick with monofilament, as it is much easier to get out of snags than the super braids, like Berkley Fireline.

Another reason I do not care to use super braids on catfish is that once hooked, catfish

roll, and rollover again trying to shake the hook and I have seen catfish that have rolled up so tight in super braid line that it cut their skin.

Because we release quite a few of our fish, monofilament allows us to release more fish unharmed.

I mentioned earlier that channels are opportunist, not being terribly fussy about what they eat and caught on numerous baits including; nightcrawlers, worms, cut bait (suckers, shad & skipjack), shad entrails, chicken or turkey liver and of course stink baits.

Stink baits are popular on the Missouri River and as their name suggests, they are a smelly concoction.  The reason that they are so popular is because they are easy to use and very productive, yet very messy.

Many people make up their own mixture using a smelly cheese, blood and other “secret” ingredients.

If you do not have your own recipe for stink bait, you can find it and plastic stink bait worms at most bait shops. Sonny’s stink bait is my choice when it comes to a stink-bait and I have taken both small and large catfish using it with a stinkbait worm rig.

Stink bait worms are pre-rigged with a short heavy monofilament leader with a small treble hook that straddles the bottom of the worm.

These rigs are nothing more than a large egg sinker, snap swivel and plastic stink bait worm.  Putting this rig together is simple. First, your main line goes through the egg sinker and then ties to the snap swivel.   Attach the leader from the stink bait worm to the snap and then, using a stick, dip the worm into the stink bait, getting as much of it as possible on and around the worm.

There are several other rigs that work well for catfish, especially in the swifter water found below the dams.

One of these is the Wolf River rig, a simple rig, made up using a three-way swivel, a sinker and a large circle or other type of bait hook.

Using your heavier main monofilament line, tie it to one of the three swivels, on another swivel; you will attach a heavy line monofilament leader with a large strong hook, a creek chub or some other bait.

The dropper, the bottom line, is a six to ten inch piece of lighter monofilament line and where your sinker attaches, the sinker rides along the bottom allowing your bait to ride just off the bottom keeping your hook and bait out of the snags.

If snagged, the lighter line can be broke off and all you will lose is your sinker. This rig excels when fishing in heavy current, but you may have to re-bait from time to time as swifter current can beat up your bait.

Do not be fooled when you see or feel a slight tick on the end of your rod, thinking it is just a little catfish. Even huge catfish have tendency to tap or suck at your bait, so once you feel the bite, let out line or drop your rod tip back towards the fish. This allows the catfish to take the bait into its mouth and after a few seconds, reel up the slack line and once you feel weight at the end of your line, set the hook hard. 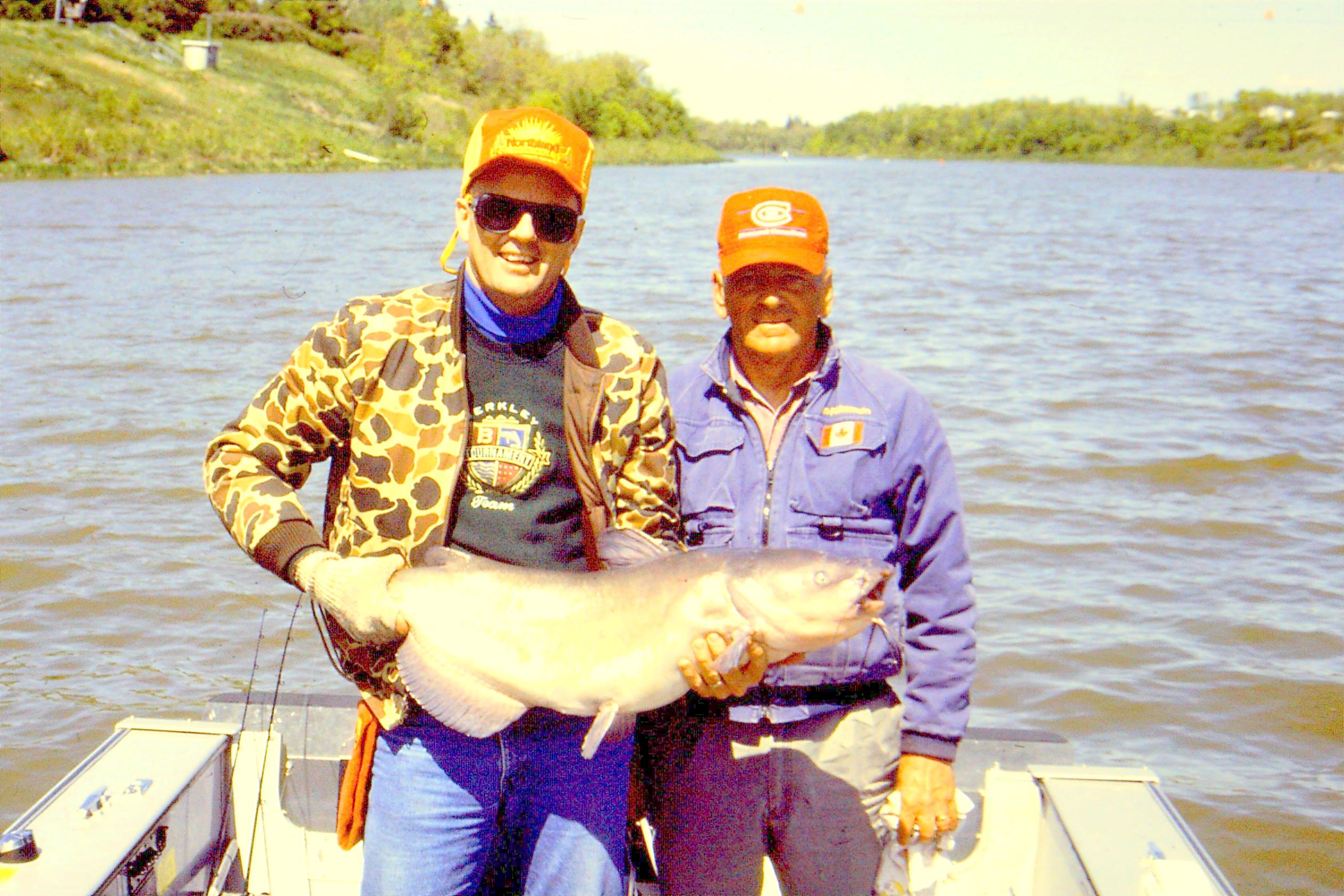 Years ago, author had an opportunity to fish the Red River near Selkirk, Manitoba Canada for big channel catfish. Pictured is one of the line-class record catfish taken on that trip. (Gary Howey Photo)

As catfish have such a hard mouth, setting the hook hard will ensure that your hook penetrates deep enough so that these hard fighting fish will not rip loose and pull off the hook.

Some anglers like to drift the fast water below the dams for catfish. When drifting below the turbines, you ’will need to put your motor in and out of gear in order to keep your bait as vertical as possible and  if you do not, you will end up snagged up on almost every drift.

Another rig that I have used when drifting fast water is a simple crappie rig baited with turkey liver.  I replace the hooks on the rig with a size one or larger hook and instead of attaching the weight to the snap at the bottom, I attach a short three to four inch rubber band between my snap and the weight.

This helps me to keep the crappie rig from, snagging up on every drift.  If the weight does hang up, I pull back hard on the line and then release the tension, allowing the weight to either pop up out of the snag or break off,  and if it does not all I have to replace is a the rubber band and weight and not the entire rig.

One thing I have found out that there is a difference in liver as turkey liver is much courser than chicken liver and will stay on the hook longer in current and harder for the catfish to pull off, it may not be as bloody as chicken liver, but in a heavy current situation still catches fish.

Frozen turkey or chicken liver, purchased in most grocery stores and kept in the freezer until needed. I pack mine in a cooler before I head out and prepare them when I get to my favorite fishing hole.

Here is how I prepare my liver, I pull them from the freezer the night before, put the package in a bowl and in the refrigerator. In my boat, I have an aluminum cake pan, which acts like a small reflector oven, warming up and drying out one side of the semi frozen liver, making it leathery and tough so that it stays on better in the current.

Preparing it this way, makes it harder for a fish to pull it off the hook without taking the bait, hook and all into its mouth. I also have a piece of wood I put into the pan making it easier for me to cut up the liver and cut bait.

Using liver and cutbait can be a messy proposition, so take along several large absorbent towels as no matter how hard you try, you are bound to need them to wipe your hands and boat after re-baiting.

If the walleyes and bass or whatever you are fishing for are not biting, try catfishing.

Catching catfish is a lot of fun as they are accommodating when it comes to taking the bait and when a big channel grabs onto your bait; it will test both your equipment and you and after a long day on the water, you’ll be glad to set down to a meal of catfish as they are mighty fine eating.