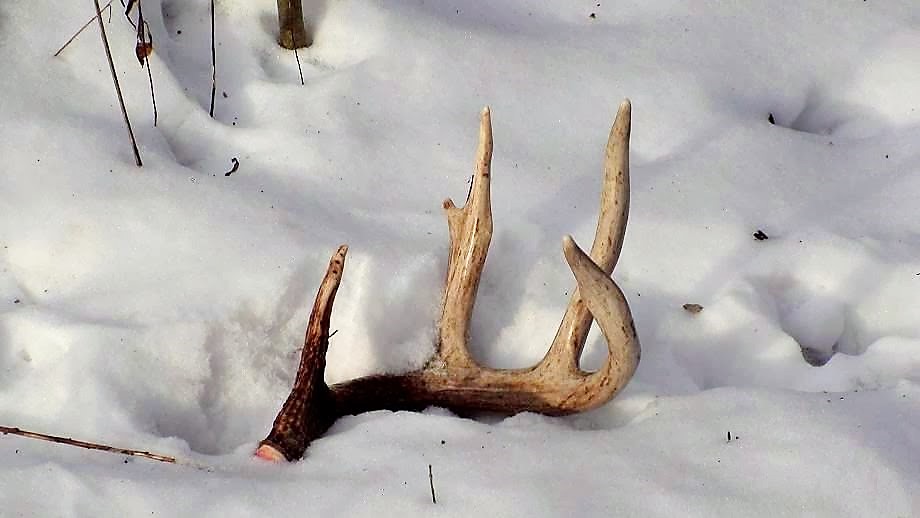 It’s been a pretty mild winter so far and with very little snow by mid-January, we’re able to get outdoors and recover from cabin fever and able do things outside.

When it does arrive, it’s something we’ve been waiting on for a long time, with an opportunity to get outside and enjoy some of the warmer weather.

As it gets closer to spring, I start thinking about getting out into the woods and on the open water, where I’ll begin my spring turkey hunting scouting, looking for turkey sign, I’m also keeping an eye out for deer sheds.

For those of you that haven’t hunted sheds, it is a great thing to do as winter turns to spring.

Bucks shed their racks, their antlers every year after the Rut as they no longer need the added weight to show their dominance attract does as the breeding season has ended.

As bucks shed their headgear-rack-antlers annually and if you can beat the rodents and other critters out there that like to chew on them, to obtain a source of calcium, you’ll have the opportunity to find a shed or two.

A buck’s antler-rack is a lot different than cattle horns, cattle horn is hollow, with a deer’s rack made up of honey combed solid bone.

The knobby nub protruding from the buck’s skull, their pedicles is where the new antler-rack grows and supports the buck’s rack.

As bucks start growing their new racks-antlers, they’re no more than bony growths covered with skin and hair, velvet.  They grow incredibly fast in 3 to 4 months, making them the fastest growing living tissue there is.

These pedicles are a permanent part of the buck’s forehead, the point where the antler drops off or shed.

If you’re out in the late winter or spring shed hunting, it’s also an excellent way to determine if the big buck you hunted last season made it through the winter

If you find his sheds, he’s still around, unless the winter did him in and once you have the sheds, you can start putting together your hunting plan for next season.

As the breeding season, the rut ends, bucks will shed their racks, lightening their load, allowing them to carry less weight through the winter.

Not all of the bucks drop their racks at the same time; some will begin to lose them following the rut, when their hormone levels begin to drop. Generally, deer in the upper Midwest will shed their antlers in February and March.

There are several reasons deer shed their antlers, it allows the buck regeneration, or re-grow a new set of antlers.

Antlers grow rapidly from their (base) when the buck is in velvet during the spring and summer. In a study by Jacobson and Griffin in1983, it was found that yearling could grow as much as a 3/4 inch in a week and adult bucks putting on up to 1 1/2 inches per week during its peak growth. Their growth rate slows down during late summer, as fall approaches with the blood no longer feeding the rack, the velvet begin to dry and when dry enough, the bucks shed it by rubbing and thrashing on vegetation, which can be completed in as little as 24 hours.

For those of you who haven’t had the pleasure of shed hunting, a good place to start, looking would be to drive through the country, keeping an eye out for well-used deer trails where they cross the roads.

I’ve found heavily traveled trails in the snow or grass; those resembling hard-packed cattle trails, leading from heavily wooded areas, coming over the road, and heading into the areas where the deer are feeding and bedding to be a good starting point.

Once you’ve located a well-used trail, you’ll need to obtain permission from the landowner before entering the property.

Where I’ve found a lot of sheds were the deer travel to and from bedding areas, along a route heading to an area where they are feeding and of course those near at their food sources.

You’ll find more sheds in areas where the deer feed, as when a buck feeds, there is a lot of up and down head movement, causing the antler to drop off

Another reason you’ll find a good number of sheds near a food source, is that they spend a lot of time there during the winter months.

These feeding areas can be corn-bean fields, near haystacks, grain piles and in or near cattle feed lots, as deer know these areas offer easy access to a food supply.

Do not be in a big hurry when shed hunting as even a small amount of snow or leaves can cover a shed, making them impossible to see until you are right on top of them. If they have been on the ground long, they will have faded and a dull gray color, making them particularly hard to see in sandy soils.

This is the time of the year, when folks just want to be outside and do something, making shed hunting a great opportunity for you to spend a little time in the hills and woods, enjoying the outdoors while looking for one of Mother Nature’s most beautiful art forms sheds.

Gary Howey, originally from Watertown, S.D. who now resides in Hartington, Neb. is a former tournament angler, fishing and hunting guide. He is the Producer/Host of the award-winning Outdoorsmen Adventures television series, seen on KTTM/KTTW-TV, Sioux Falls/Huron, S.D. Sundays @ 7:00 am and on the MIDCO Sports Network Thursday at 5:30 pm and Sunday at 10:00 am. The show airs in nine states in the upper Midwest.  He and Simon Fuller are the hosts of the Outdoor Adventures radio program on Classic Hits 106.3, ESPN Sports Radio 1570 in Southeastern South Dakota, Northeast Nebraska and on KCHE 92.1 FM. in Northwest Iowa.  Looking for more outdoor information, check out www.outdoorsmenadventures.com and like Gary Howey’s outdoors on Facebook.