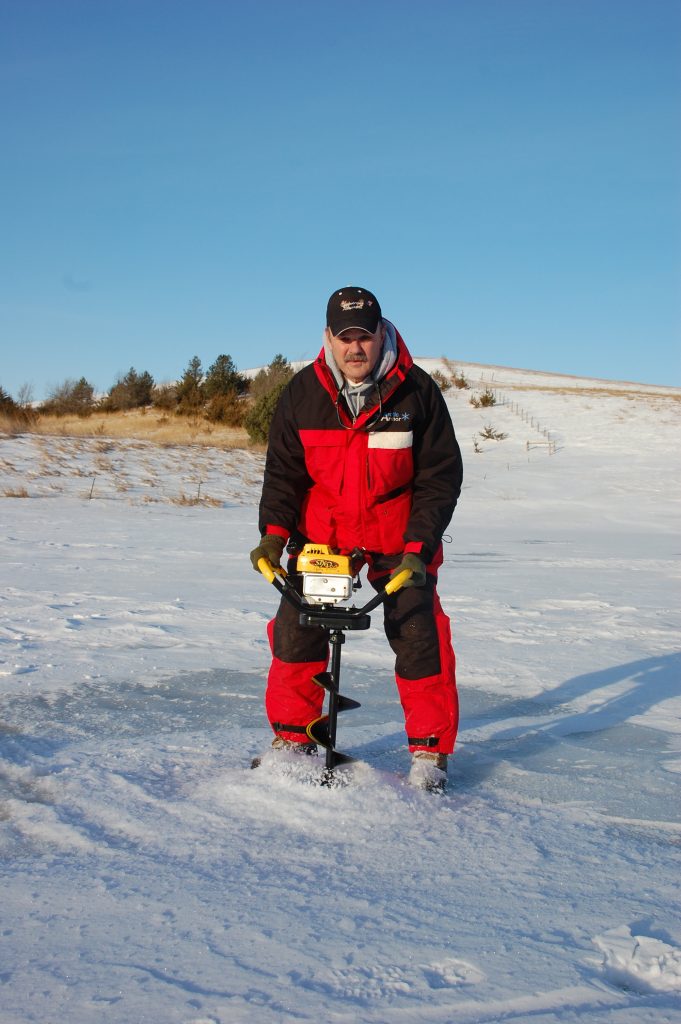 It happens every year around the first of December, when people start calling the office asking about ice fishing and where they’re biting.

With the cold temperatures that we’ve had over the last week or so, you’d think that there would be some pretty good ice being made.

And its probably building on all bodies of water that aren’t snow covered, but on those ponds and lakes that have snow piled on them, it’s more than likely happening very slowly.

Snow that piles on the unfrozen ground does the same thing to the ice; it acts as an insulator, not allowing the cold temperatures to get down and freeze the ground or the water.

Sure the ice may look strong or be solid along the shoreline where the snow has blown clear, when in fact there are probably areas on the lake that have very little ice because of the snow that covers it.

Before heading out on any body of water to ice fish, we all need to be aware of the potential dangers of ice.

The color of the ice is a good indicator of the strength of the ice.  Look for clear blue ice, which is the strongest because it’s created by a sustained freeze.

Unsafe ice is black, gray or honeycombed because of repeated freezing and thawing. Discolored or dark spots suggest open water, thin ice, or possibly a spring, all of which are dangerous.

As I mentioned earlier in this article, snow cover insulates the ice, inhibiting solid ice formation and making it almost impossible to judge the diameter of the ice.

Vegetation will also absorb heat from the sun and rotting vegetation can create its own heat, animals swimming under the ice can also weaken it.  This is especially true in shallow lakes and rivers.

Moving water weakens ice approximately 15% and wind creates a pumping action that will force water through the breaks and cracks enlarging them and making them bigger over a short period of time.

If your crossing ice on foot and you’re not sure of the thickness of the ice, it’s safer to slide your feet instead of stepping, helping to distribute your weight more evenly.

You carry an ice chisel to check the thickness of the ice as you work your way across the ice.

Another good idea is to carry along a cord attached to large nails or a screwdriver.  This can be worn on around the neck can be used to pull you back on the ice if you should happen to fall through.

Once you’re back on the ice, roll away from the hole instead of standing up.  This will help you get to thicker safe ice.

A general rule of thumb when it comes to how much ice it takes to support you and your equipment on clear-blue ice formed under ideal conditions is listed below.

(Earlier in the winter, it’s a good idea to double the thickness to be safe).

Early Ice fishing can be very productive and a lot of fun, but before venturing out onto the ice to early can lead to a disaster, so don’t rush to get on the ice

Gary Howey, Hartington, Neb. who is a former tournament angler, fishing & hunting guide. He is an award winning writer, producer, and broadcaster and inducted into the “National Freshwater Fishing Hall of Fame” in 2017. He is the Producer-Co-Host of the award winning Outdoorsmen Adventures television series and the co-host of Outdoor Adventures radio. If you are looking for more outdoor information, check out garyhoweysoutdoors.com, outdoorsmenadventures.com and like Gary Howey’s Facebook page or watch his shows on www.MyOutdoorTV.com.

← Prev: Ice Fishing just around the corner. Next: Before putting it Away →