With a week’s worth of warm weather in the forecast, Gary Howey, Hartington, Neb., and I decided it was “now or never” time to fish a farm pond we’d had our eyes on for quite some time.

Gary had fished it years ago and had great success on largemouth bass. Rumor had it the pond could produce good numbers of bluegills and perch as well.

This was actually our second attempt. A few weeks ago we had tried to drive to the pond, but warm weather and greasy mud over the frozen field changed our minds. It was forecast to be even warmer that day, and since we had to drive a long ways through a hilly corn field we felt we might not be able to get out if it warmed up any more.

But this time was different. It was 8 below in Hartington that morning so we weren’t worried about the mud.

Yet, when we pulled up alongside the pond, Gary pointed and said, “Is that open water over there?”

Right along the dam the southwest wind was pushing small waves against the ice. The open water field was about 100 feet long and 50 feet wide.

“Keep drilling test holes as you go out,” I told Gary who was firing up his Jiffy propane auger. “That might not be the only spring out there.”

But the test holes revealed a good 10 inches of solid ice. I followed with the depth finder and when we registered nine feet of water we decided to start fishing.

We both were marking fish under us but there were a lot more “lookers” than “biters.”

Finally Gary set the hook and brought up and 8-inch bass. I soon followed with another. We caught several of these little fish before we got a decent-sized bluegill.

We were using tear drop jigs tipped with wax worms. Gary also had a bobber with a minnow on the hook but aside from one bite, which he missed, the minnow provided no action.

We decided to drill more holes.

We found a little deeper water and decided to try there.

The bigger ‘gills were in deeper water, that’s for sure. We began to have decent action, each landing a fish about every 10 minutes. We both had fish under us almost constantly, but the ratio of fish to “biters” was pretty low. 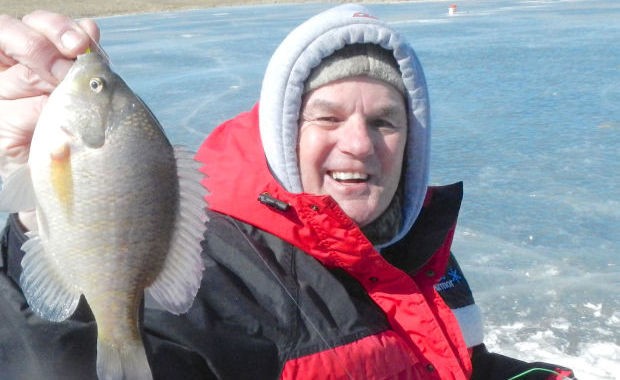 Gary Howey shows one of the bluegills we caught last week on an outing to a farm pond southwest of Hartington, Neb. Warm weather may have ended our ice fishing season now.

It doesn’t seem to matter which kind of fish you are targeting, whether bluegill, crappie, perch or walleye, the bite always picks up right about dark.

We released everything we caught. I’m not sure if that was at the owner’s request or not. I forgot to ask Gary, but we were out for fun, not meat.

Our local ice fishing may be done because of this warm spell. I don’t think any of the ice around here can be called safe. So don’t go rushing out there to get in one more trip. If we get a good cold snap later, it may be safe to go again.

But not me. I’m waiting for open water. And it can’t come soon enough.

The first few months of the year are slim for most outdoorsmen. Hunting seasons are pretty much over, open-water fishing is a couple months away and things just slow down.

It’s traditionally been a slow time for me to receive photos from readers for use on this page. I’m not sure how long I’ve been doing this each week, probably close to 14 years, maybe longer. I sure want to keep it going, but I’m running out of photos.

Check your cell phones or cameras. Send me photos of your hunting and fishing success. Be sure to include this information at minimum: Name, age (if a young person) son or daughter of Mr. and Mrs. or whatever, hometown, where the action took place and when. Include other information if you want because the captions should answer any questions readers might have.

You can email this to me at: lfentfish@msn.com or drop a print and caption information off at the front desk at the Journal or mail it to me at 2505 S. Olive St. Sioux City, IA 51106.