Fishing outlook is great at Devils Lake By Larry Myhre 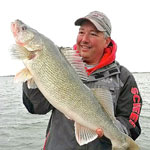 Anglers heading for North Dakota’s Devils Lake will find conditions to be a little bit different this year.

A very mild winter with very little snow has combined to result in very little runoff into the lake.

And that, says professional fisherman Johnnie Candle, who lives and guides on the big lake, will change fishing patterns. “We’re not going to have that big influx of water that causes fish to move into current areas,” he said. “Instead, you are going to have to look for areas of warmer water, which isn’t hard to do. Those shallow, dark bottom bays with early weed growth are going to be the key.”

Candle was in Sioux City for the Scheels Fish Fest activities at the Southern Hills Mall. He’s been on the walleye tournament trail since 1994 and has been guiding about 90 trips a year (in between tournaments) for the past 15 years.

Walleye fishing has been a way of life for Johnnie Candle. The longtime tournament angler lives and guides on Devils Lake in North Dakota, and fishes up to 10 tournaments around the country each year.

“The fish won’t be as concentrated as we are used to seeing and that’s not only walleyes, it’s also white bass,” he said.

Fish populations are as good as they have ever been.

“The walleye population is in line with the long-term average and the pike population is up a little bit,” he says. “If you like catching northern pike and love to eat them, please come up because we’ve got more than we really need. Bass and perch populations are holding their own.”

While Devils Lake is not noted for big walleyes, it does have a reputation of producing lots of good eating-size fish.

“The size of walleyes I saw while guiding last year was 16 to 17 to 18 inches long,” he said. “We had a huge year class from 2009. Those were 16-inch fish. This year they should average an inch to an inch and a half bigger. We should be able to average 17- to 19-inch fish. When you can catch 70 to 100 walleye a day averaging that size, that’s a pretty good fishing day.”

“If you really want to work hard and go after multi-species, you are really going to leave here with a good fish fry,” Johnnie said.

How about techniques to put walleyes in the boat?

“This spring I’ll be looking at those shallow bays most of the time,” he said. “I’ll be holding in 5 to 7 feet of water and I’ll be casting even shallower using shallow diving crankbaits. Flicker Shads are one of my favorites, or soft plastic swim baits like a Ripple Shad or Northland Mimic Minnow on an eighth- or quarter-ounce jig head.

“Ill be moving down the shoreline looking for concentrations of fish,” he continued. “When I find an area with some active fish, I just anchor up. I use the Minn Kota Talon now so it is literally a push of the button. Then I’ll grab some slip bobber rods and throw them out with leeches, and when they quit biting just keep moving down the bank until I find another pod of fish.

“I fish six to 10 tournaments each summer so I’m on the water a lot,” he said. “I’ve lived in North Dakota for 19 years now so I think I’ve got the Great Lakes part of me out of my system. It’s been almost 20 years since I lived in Ohio and fished Lake Erie every day.”

Johnnie said he started on the professional walleye circuit in 1994. “I had just graduated from college the year before with a degree in marketing. I took a summer off fishing before I got a real job in September of 1993 and by the spring of 1994, I’d had enough and started fishing full time.

“I know my parents thought I was crazy,” he continued. “I took every penny I had saved up and bought a truck and a boat and jumped in with both feet. I’m glad I did. I’ve loved every minute of it.”