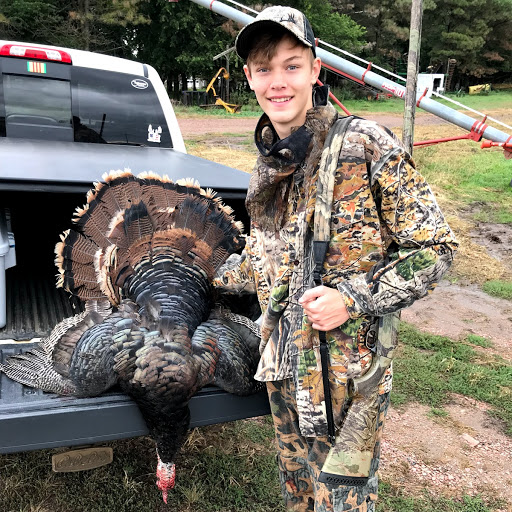 I find nothing more exciting than introducing someone to the outdoors. Howey called in a gobbler for this new hunter, with the first time he shot a shotgun, he took his first spring gobbler.

Turkey season is underway, running through the end of May, the 31st with both South Dakota and Nebraska hunters working hard to get this season’s gobbler.

The South Dakota, and Nebraska Spring turkey seasons are well underway with hunters having until the end of May, the 31st to tag their gobbler.

Online, I’m beginning to see photos of hunters with their 2022 Spring gobblers, and in Northeastern Nebraska, when the wind dies down the gobblers will be out strutting their stuff, giving hunters an opportunity to tag a Tom.

The state of Minnesota’s Spring turkey season is divided into regions, with several regions or zones being open through the end of May.

From what I’ve seen and read about, there’s a good population of turkeys out there, but because of the wind, I haven’t been able to get out hunting.

As I travel around, I’ve seen several gobblers, trying to strut, in the wind, and if they’re not in a protected area, they are having a tough time, keeping their tail feathers displayed and from being tipped over.

What a hunter needs to use on the windy day in order to have the volume needed to carry your call out very far so that a gobbler can hear it, you’ll want to use your loudest call, for me that means I’ll be using my box or slate calls.

These allow me to get my hen call out a lot farther than the other fifteen calls I have, I’ll also have my diaphragm in my mouth just in case I come across a gobbler as I enter the woods.

Gobblers just like most wild critters are uneasy in the wind, as they can’t rely on their superb sense of hearing to warn them of approaching danger.

Camouflage is something I believe in as turkeys have excellent vision and if you don’t blend in, it will spook the turkeys.

Another thing, and why I won’t use is a blind in the wind, as they flop around and make too much noise’ which will spook the turkeys.

I prefer to set up with my back against a large tree, where I rely on my camouflage to hide me and once the strutting gobbler gets close and turns around, I can bring up my shotgun slowly ready to shoot as he turns around.

Late season spring turkey hunting, with the hens on the nest means there a lot of gobblers out there, looking for a mate.

One the gobbler comes down from its roost, it will spend some time, rounding up his hens and after feeding, the hens will go off to where they have their nest.

Many of the older gobblers, are busy caring for their hens, while the Jakes (younger Toms) are still together, as there’s security in numbers and generally easy to call, and will charge your turkey decoys as soon as the spot them.

A couple of years ago, on a windy day, I took a young kid, who hadn’t hunted out to hunt late spring turkeys, he’d never shot a shotgun, so I loaned him one of mine, along with camo, binoculars and ammunition.

We were set up in front of a cedar tree belt at our backs and had a short push in the ground camo screen hiding us. We put out a couple of Dakota Decoys and proceeded to wait for first light, once we were settled down, I explained to him, how this was supposed to work and once I had the bird headed our way, when it was close enough for a clean shot, I’d give a warning putt, which made the bird to stretch out their necks to see were the warning putt had come from, then that he could shoot.

I started calling quietly, as I didn’t want to spook any birds close by, and immediately got a response from the cedars to the northwest, then silence, so I sped up my calling, getting several gobbles down below us to respond.

The next thing I knew, four Jakes came out of the cedars, when one gobbled, it fired up the other birds.

Now, that I had their attention, I used my diaphragm call to coax them towards us.

All of the birds had their necks stretched out, looking for the hen that responded to their calls.

The closest bird, spotted our decoys and then it became a race to get to the decoys.

I kept quiet, allowing the birds to get close enough for a shot, but they were coming on so quickly that they were in the decoys before my hunting partner could get the shotgun up shoot.

I whispered shoot, as the four birds were running around in circles and pecking at my gobbler decoy.

The best shot to put down is to aim at the head when their neck is stretched out trying to figure out what was going on.

As the birds circled the decoys, I told him to “shoot” his response was “which one” as they were all Jakes, I said, “take your pick, there all gobblers.”

The twelve-gauge barked and the lead Jake went down hard, while the other three birds backed off, trying to figure what was wrong with it.

As we burst from behind the blind, the other birds beat feet and went airborne back towards the cedars where they’d come from.

It was a pretty proud moment for us, as my young hunting partner had tagged his first turkey and I was proud, just to see it appear before my eyes and the grin on his face as he picked up the bird.

Spring turkey season gives us the opportunity to get out into the outdoors, to enjoy the time as all of Mother Earth’s handiwork is waking up and you couldn’t find a better way to spend time in the woods listening for the Tom’s gobble and a time when everything is blooming as the earth wakes up after a very long winter.

← Prev: Weather and how it affects Fishing   By gary Howey Next: Close encounters of the wild turkey kind by Larry Myhre Reprinted from the Sioux City Journal →

END_OF_DOCUMENT_TOKEN_TO_BE_REPLACED

Weather and how it affects Fishing   By gary Howey

Howey caught this walleye just before a cold front moved in, by slowly dragging a jig along the bottom and by knowing what the weather is going to...