When fishermen think of bluegills, their thoughts turn to weed beds.

“That’s where they are right now, right?”

Well, if you are happy with small to mid-size ‘gills, you’re right. But if it is those dinner plate-sized jumbos you want, that answer is wrong.

Big bluegills, and I’m talking those nine, 10 or bigger-sized hogs, are not found in the weeds during the dog days of summer. No, those giant, ultra-light-tackle-busting monsters are found in deep water in glacial lakes all across the upper Midwest.

I guess we should get a little more specific right now, especially when we are talking about lakes. Good bluegill lakes are a lot like good walleye lakes. Lots of deep water, lots of sunken islands and bars, long tapering points and some black bottom bays. If your lake doesn’t fit that description, thick weed beds might be your best option.

I first ran across deep water ‘gills on Lake Vermillion, that big jewel of a lake located on the Precambrian shield of northeast Minnesota. It’s not exactly the kind of lake we’re talking about here, but the big bluegills leave the bays and get on structure in the summertime. Back in the mid ’70s it didn’t have a very strong bluegill population. That has since changed, however.

There was a tiny rock bar about 12 feet down, not much bigger than the average-size living room. I found it by accident since it was not on the map, but my flasher found it. It topped out at 12 feet and when the first fish came in I was really surprised. It was a big bluegill. I caught and released several of them off that small bar each day thereafter.

It was food for thought, but being a little thick-headed, I didn’t put two and two together.

A couple years later I was fishing Lake Wapogasset near Amery, Wisconsin. It was a walleye factory in those days and I found them easy pickings during the seven days I fished there. There’s a major point, so broad it is almost a flat in the southeast corner of the lake. Walleyes were thick all along the weed line. 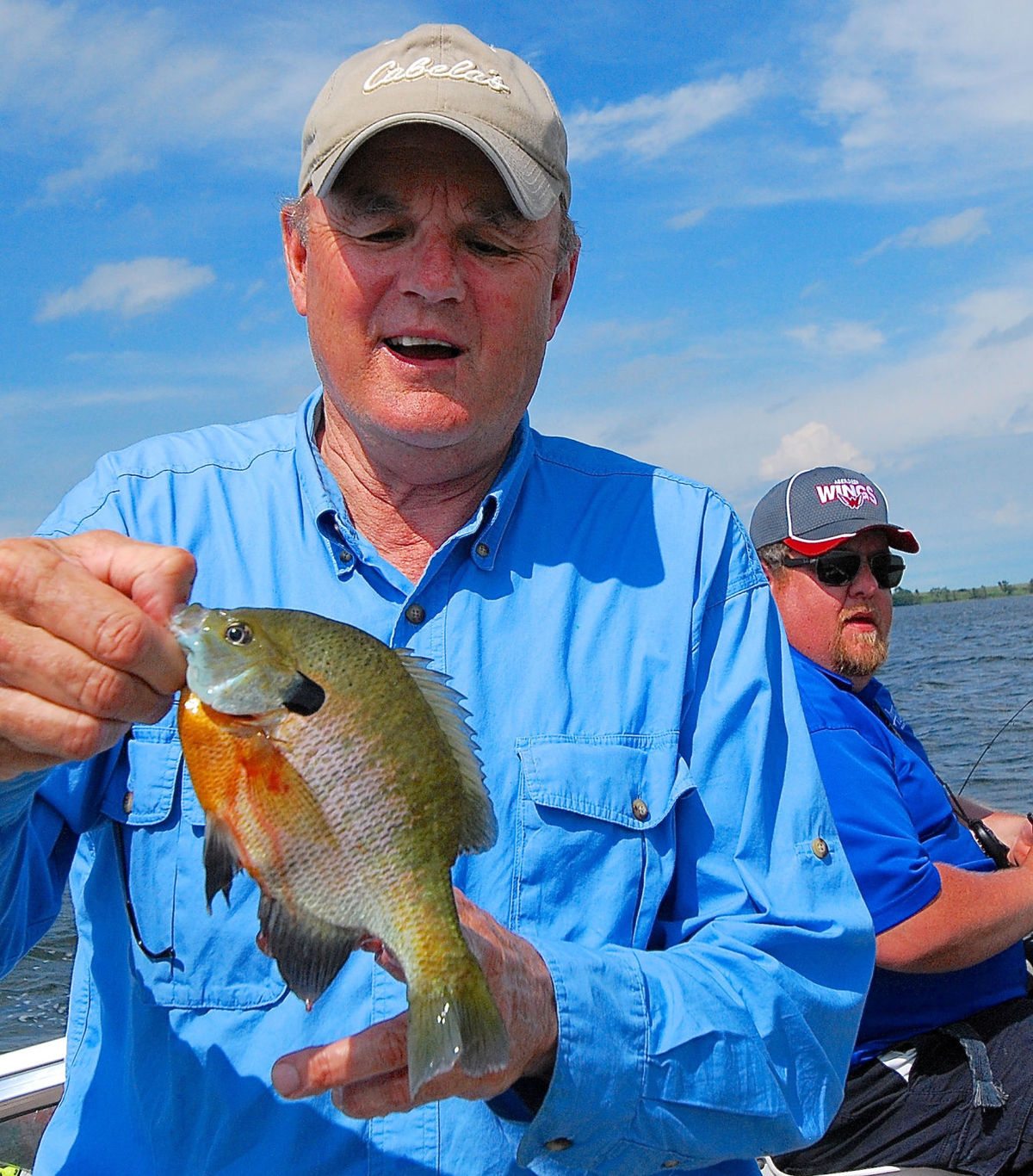 Just across from there on the other side of the lake, a small, 15-foot bar jumps up out of 25 feet of water.

I pulled a Lindy Rig through there and lost my crawler. It was not a perch, it was a solid bite. I slid on another crawler and pinched it off leaving only a couple of inches on the hook. As soon as it hit bottom, I hooked up. It was a bluegill, almost 10 inches long. I caught several there each day but never broke the 10-inch mark.

As I fished other glacial lakes through the years, many in the Alexandria, Minnesota, region, I often ran across big ‘gills in deep water. Roy Lake, in northeastern South Dakota, at one time had unbelievably large bluegills. Maybe it still does. I haven’t tried fishing for them lately. Again, those monsters were in deep water and quite often huge crappies were mixed in with them.

One thing I’ve noticed is that these deep water ‘gills are hard to find. And when you do find them they seem not to share the spot with walleyes or bass. Crappies? Maybe. They aren’t on every deep bar or other structure. Maybe they don’t like to share the spot with walleyes or smallmouth or northern pike. And where they do gang up, the structure is usually very small and rocky or gravelly.

When you find a spot, remember it. The ‘gills will be there next year.

A Lindy Rig with a piece of crawler is a good way to find them, but once you locate them, a slip bobber and a piece of worm on a small hook is the way to go. You can usually see them on your graph because bluegills do not sit on the bottom like walleyes often do.

So if your graph shows you suspended fish on a hard bottom, they just might be jumbo bluegills. Why not send down a hook and find out?

← Prev: 5 TIPS FOR BETTER SOIL PREP Next: THINGS ARE Good ON THE BIG LAKE By Gary Howey →