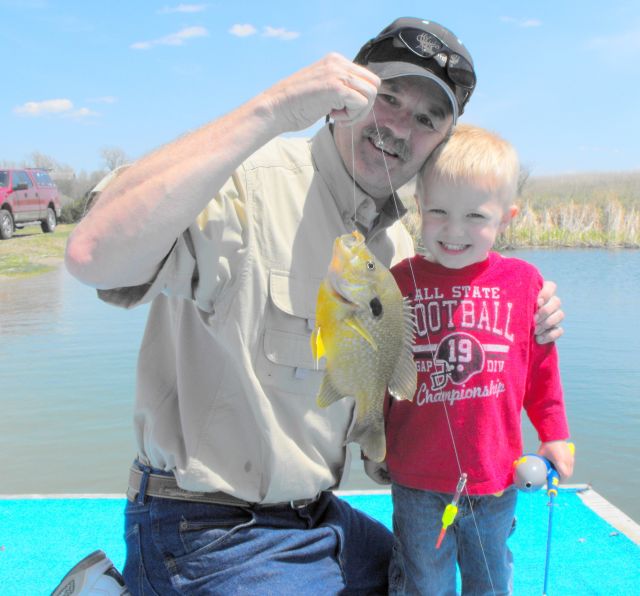 Kids have a short attention span, but once they catch a fish, look out, as they’re hooked. Gary’s grandson Braedon Howey hooked this big bluegill the second time he went fishing with his Grandpa Gary! (Cassie Howey Reifenrath Photo)

The sport of fishing and a way to feed a family has been with us for thousands of years and since the computer age, has become easier than it was years ago.

Many of us, like myself, were fortunate to be from an outdoor family, where fishing was just something you did.

But there are a lot of kids that grew up in families that weren’t into the outdoors and have missed the opportunity for some great outdoor adventures.

When I was giving seminars at schools and technical colleges, I was surprised how many of those attending were new to the sport, were anxious to learn something about fishing.

Of course, I wanted to talk with as many of those attending as I could and there were anglers there who probably knew more about fishing than I did, so it was a win, win situation, and when talking with other avid anglers, I picked up a few fishing tips myself

I was also surprised as to the numbers of adults that were there with their kids and when we chatted, found that the father had come to my seminars to learn about fishing, in order to get their kids into the sport.

Fishing can be easy to learn as You Tube has hundreds of fishing instruction videos and you can get started inexpensively into the sport.

The key to introducing anyone to fishing is to not make it complicated and with youngster, make it an exciting adventure and start them out on a body of water that has lots of eager biters, bluegill or bullhead seem to be happy to oblige.

Don’t worry about the size of the fish they catch, no matter how small, say “good catch” and let them catch more.

On my first fishing trips with my Dad and Grandparents was where we all participated in getting ready for the tip.

I dug angle worms for bait, got the minnow buckets lined up and only then found out where we’d be fishing and what for.

I really didn’t care where we fished as long as I could catch something. We’d go down to the Tee Pee bridge on the Sioux River in Watertown, S.D. and fish for bullheads, and to us kids, it was an exciting experience.

We caught so many bullheads, that our stringer wouldn’t hold them all and when we got back home, Grandpa, showed us how to clean them, with just a knife and Dad’s pliers.

The best part was having them for supper, I was proud that I’d been able to provide the meat for the supper table, they were small, but they were delicious.

Some folks taking a new angler out, seem to make it to complicated, when you should follow the KISS rule “KEEP It Simple Stupid” as the attention span of kids, unless you make it exciting isn’t all that long.

Since most new anglers are generally introduced to panfish or bullhead, because of their small mouths, you won’t need a large hook, a size 6 to 10 with a long shank will work well on these smaller species.

Depending on what you’re after, the size of the fish you hope to catch, you’ll want a bobber just good enough to float, one that offers little resistance when the fish takes the bait, they won’t have to work too hard at it to make the boober go under.

As far as the weight, no matter what you’re fishing for keep it a small as possible, with a smaller weight, even a small split shot working well in most cases.

As far as baits go, a small piece of worm, grub, or insect all seem to be good baits for the beginner, don’t cover the entire hook with the bait as you want the barb or the hook to be exposed.

Gary Howey, Hartington, Neb. a former tournament angler, fishing & hunting guide and an award- winning writer, producer and broadcaster, and in 2017 inducted into the “National Freshwater Fishing Hall of Fame”. He developed and was the Producer- Host of the Outdoorsmen Adventures television series for 23 years that airs throughout the upper Midwest and available on the MIDCO Sports Network and News Channel Nebraska. Howey is also the Host of the award-winning Outdoor Adventures radio show, heard each morning at 6:45 am throughout South Dakota, Nebraska and Iowa.  If you’re looking for more outdoor information, check out www.GaryHowey’soutdoors.com  , and www.outdoorsmenadventures.com , with more information on these pages, Gary Howey’s, Gary E. Howey’s, Outdoor Adventure radio and Team Outdoorsmen Productions Facebook pages.