I was keeping an eye on the weather, as we needed cold weather in order to get back into the dam we hoped to ice fish, but didn’t need any sub zero temperatures or heavy wind.

I was looking at ice fishing a pond southwest of town, one that was in the middle of a half section. We had tried once before to get back into it, which wasn’t a good idea as it was just too muddy and we didn’t want to tear up the field.

When the Press and Dakotan indicted next week’s weather would have sixty-degree weather, the next few days of cold weather looked to be our last opportunity.

It was nine below zero when Team Outdoorsmen Adventures member Larry Myhre, Sioux City pulled into the office, bitter cold with the wind that was howling in from the northwest.

We didn’t need to worry about mud on this trip as everything, including much of the water in my minnow bucket was hard as a rock.

Bouncing over the corn rows, we made our way to the pond with some open water around the riser, so it was my job to hit the ice first with my Jiffy auger to see if we had enough good ice. I punched several holes, finding ten inches of ice, signaled my partner to join me.

I would punch the holes with Larry following behind with his Vexilar locator letting me know the depth.

We were looking for deeper water, as this time of the year in this type of pond, the fish searched out the deepest water in the dam. 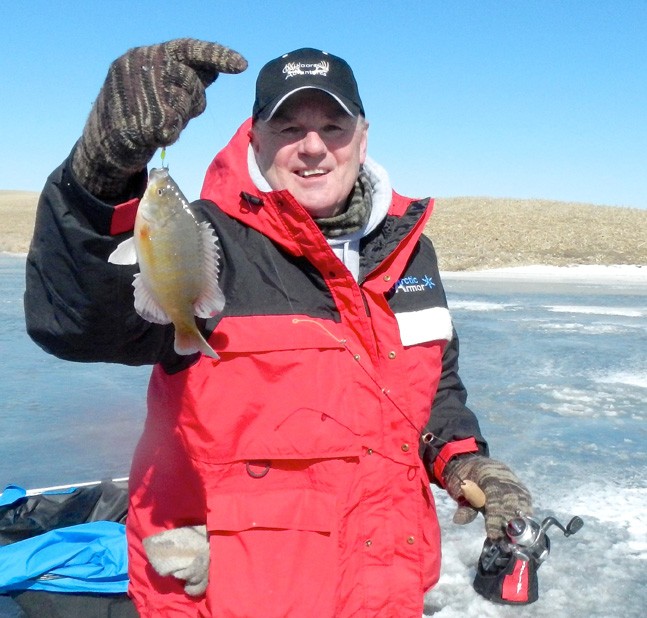 Author with one of the many fish taken and released on their last Ice fishing trip of the season. (Larry Myhre Photo)

The first two holes showed nothing but on each hole after that, fish appeared along the bottom. I knew there were Bass, Bluegill and Perch in the pond as a friend had fished it earlier, so I put down a livebait minnow rig for Bass and another for panfish, a small spoon and wax worms.

Both of our locators showed fish that would move up and down with our lures, and it looked like it was going to be another of those late season trips where we had allot of lookers but not takers.

After several fish neglected to take the bait, Larry switched to a smaller lure, moved from hole to hole and then caught a small Bass before moving to another hole to catch a Bluegill. It was time to make the switch.

This time of the year, fish are in their super slow mode, not moving much and not needing much to eat, so nothing much larger than a micro jig seems to attract many bites.

We moved from hole to hole, where the fish came up, looked at our baits and then moved off, so we moved to find fish that are more aggressive.

Grabbing the auger, I punched several new holes in an attempt to find deeper water and some biters. I moved towards the open water, five feet from the open water near the riser I located eleven foot of water that showed fish just off the bottom up to five feet.

As I kept an eye on my locator, I following my jig as it made its way down, the red marks, indicting fish started moving up towards my bait, I stopped it, raised it slightly, feeling additional weight, I set the hook and soon had a nice Bluegill flopping on the ice.

Each time my bait made it towards the bottom, the fish came up for it, stopping the bait, I twitched it, brought it up and “Bang”, another fish was on the ice. After a few pictures, I dropped the fish back in the hole and got back into action.

As my bait descended, a thick red mark appeared on the locator, coming up to meet my bait, stopping the bait, I raised it with the fish in hot pursuit, I set the hook and landed the only Perch of the trip, a nice nine inch fish.

Even though it was nine below zero, we toughed it out as we knew this would be the last ice fishing trip of the season, spending several hours on the pond, catching good numbers of Bluegill, Bass and the one Perch.

Larry and I caught several good Bluegills, a Perch as well as several smaller Bass, but that didn’t bother us, as we weren’t taking any fish home, releasing all that we caught.

After this trip, we’d have a long wait before we had an opportunity to hit the ice and this trip was one you would want to have to close the season, with allot of hungry fish anxious to take our offerings, allowing us to spend some time on the last ice.

← Prev: Local anglers complete Wyoming’s Cutt-Slam by Larry Myhre Next: Cranes are one of our greatest wildlife spectacles By Larry Myhre →