Every year as the pheasant season progresses, pheasants become harder to locate and to get close enough for a decent shot.

Younger birds have either learned from those pheasants taken during the early season with the older birds being more educated than they were at the end of last season and a whole lot spookier.

During the late season you will find that hunting to be a long-range proposition as the birds have been hunted and will run, taking off like world-class sprinters, putting as much distance between themselves and the hunter as possible or come up at the edge or just out of shotguns range.

Late season hunting is challenging. We have educated these birds for a month and all those slow dumb birds on the opener are long gone. If you think, you are going to charge across a field, getting shots at close birds; best think again or just stay home to watch television.  Late season pheasants know every trick in the book when it comes to escape and evasion.

Successful late season hunters need a plan before heading out into the field or they are going to be doing more walking than hunting. The name of the game is; take your time, is, the slower the better.

During late season, you will find snow or ice on the ground, making it almost impossible to move through a field, slough or a shelterbelt quietly.  No matter what you have heard about the pheasants hearing, you can bet they hear a lot better than most people think. I have seen hunters quietly leave their vehicle a quarter mile away from where they plan to hunt, and before they enter, not even part way to the field; birds come out the other end.

Pheasants, this time of the year prefer heavier cover; sloughs, shelterbelts, plum thickets and creek bottoms, areas tough to get through so you need to do everything in your power to gain the advantage. This is especially true on windy days, as wind makes all wildlife spooky. One of their best defenses; their hearing, is not as effective on windy days.  Late season hunters need to put the wind in their favor when hunting. Hunters using dogs always hunt into the wind, allowing the dogs to pick up the scent blown towards them.

Even when you hunt without a dog, hunt with the wind in your face.  The noise made as you work your way through the field goes away from the birds, allowing you to get closer to the pheasants for better shots.

Another plus of hunting into the wind is that once the birds flush, it is going to come up against the wind. By forcing the bird to fly against the wind, you have a little extra time to get a bead on the bird before he flies off into the next county.

Late season hunters need to “SLOW” down.  We all hunt too quickly and the quicker you move through the cover, the more noise you make. If not forewarned, late season birds will hold tight, allowing the hunter to walk past before flushing behind them. By walking slowly and pausing, you will force the birds to either run or flush, giving you the opportunity to get a shot.

Many of those birds that did hold will run off to the side. Some of these birds will flush if you work slowly across the field, moving from side to side, pausing as you go. This is extremely important when you get close to the end of the field as the birds will hunker down, hoping the danger will move past them.

As you near the end of the field, stop, pause for a minute or two, which causes the birds to become nervous.

If you hunt with a dog, stop at least 35 yards from the end of the field, allowing the dog to work the last part of the filed thoroughly. Pheasants hunker down flat on the ground or under the grass, flushing only when you step on them. Those not hunkering down will run, coming up far ahead of a hunter. 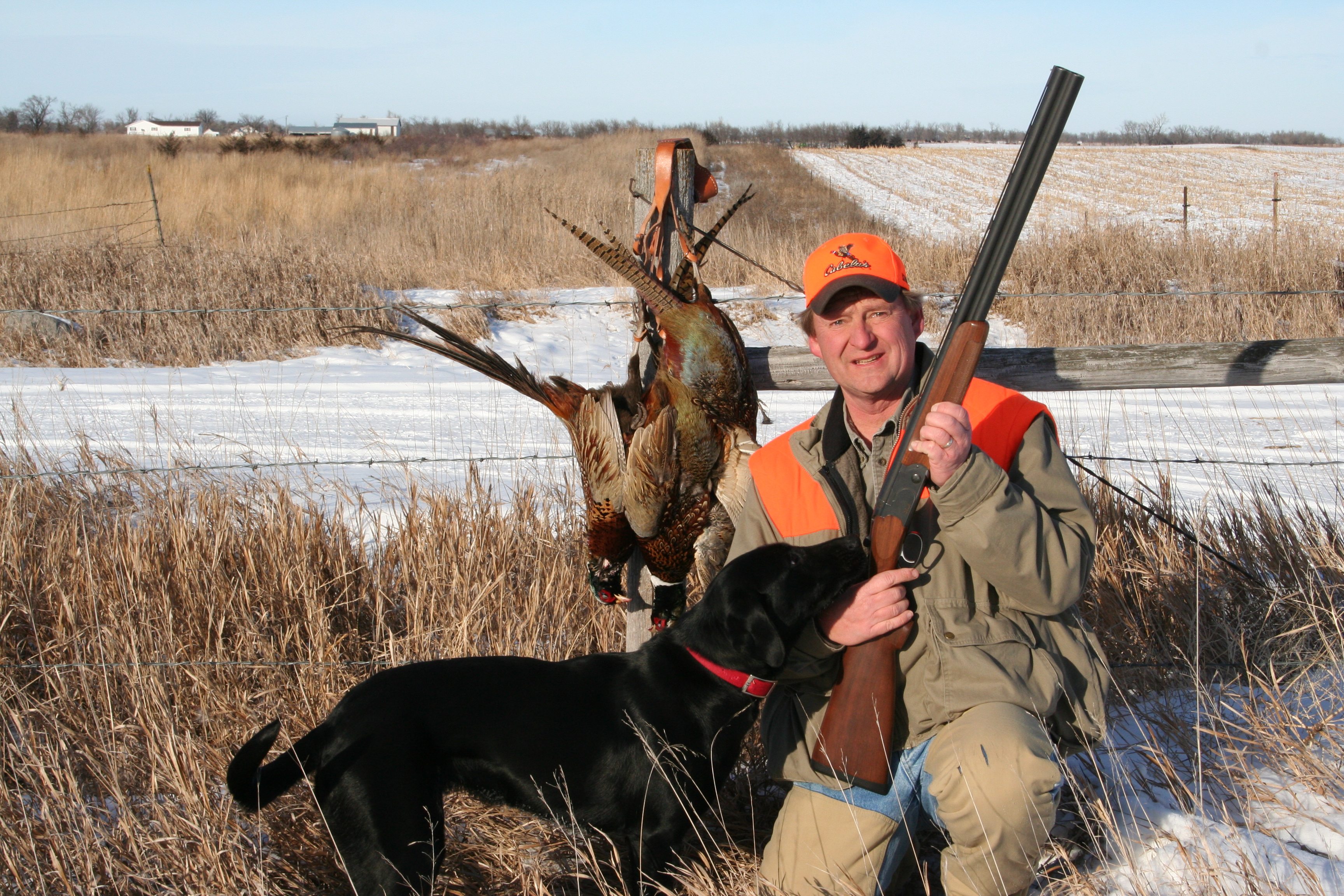 Long shots are the name of the game during the late season; heavier loads are a good bet to have the knock down power needed for the longer shots. In late season, I go with 5-shot and in some instances, depending on how spooky the birds are will go with 4-shot

Loosing birds during this time of year is part of the game, not a good part, but nonetheless, it is a part of it.

One of the reasons is the cover you will be hunting will be thick and many times covered with snow. Even if the bird goes down hard, they will end up in some of the nastiest cover you have come across. Wounded birds hit the ground running, heading out away from danger, burying themselves under the grass, weeds and snow.

Dogs are a big help, but if you are in a field with a large concentration of birds, there is so much scent; even the best dog will have a tough time locating a downed bird.

Late season hunters will have to earn their birds and by using a few late season methods, you can have some very successful hunts.

← Prev: Ice Fishing Then and Now By Gary Howey Next: Understanding And Controlling Coyotes →