Veterans and those serving veterans have always been dear to me as the military tradition runs deep in my family, with my father, brother, uncles and cousins all serving in the military.

My father, brother, uncles, cousin and I all served, some during World War Two and others during Viet Nam. I served in the Army with over-sea tours in Germany and Viet Nam and then in the Iowa and Nebraska National Guard.

This is why, when the colors pass in review or our National Anthem played, I like others who served, remove our caps and place them our hands over my heart.

Because I served and my pride in my country, any opportunity I have to thank or highlight veterans, I will be there.

When asked to take part in the “Doug Brown” Memorial North Central chapter Paralyzed Veterans of America Pheasant Hunt it took me but a split second to say “Yes.”

Doug served as the Veteran’s Representative at the Sioux Falls, South Dakota Veterans Administration serving veteran’s for many years.

This annual event, held in his memory allows disabled veterans and individuals the opportunity to take part in a real South Dakota pheasant hunt.

Friends and family of Brown, the North Central Paralyzed Veterans of America staff, volunteers from throughout the area and the folks at Top Gun Hunting Ranch near Howard, South Dakota all contribute to the success of this great annual event.

The event starts out with a great breakfast, safety briefing and with the assistance of a special built trailer, that allowed wheel chair bound veterans and others to  load  into the back of the pickups that transferred them to the field and served as their shooting platforms.

On our first field, the pickups carrying these hunters made their way to the end of each field where they would block while the walkers and I pushed through the crop fields, CRP and grasses.

The excitement of the hunt started quickly when one of the numerous dogs working in front of the walkers went on point with those walkers stationed on that side moving up on the dog.

As we approached the dog, a boisterous colorful rooster burst from the heavy cover into the air, cackling as it rose, with the cry “Rooster” echoing across the field.

The cackling rooster turned into the wind gaining altitude, putting as much distance between it and the dog, winging its way in the direction of the end of the field. 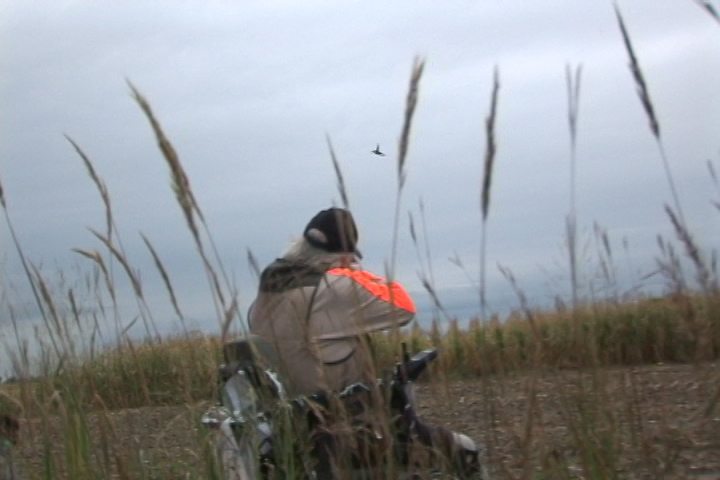 This disabled hunter had the help of a tracked wheel chair, allowing him to take part in the Doug Brown Memorial & P.V.A. pheasant hunt.

It continued to climb, swung left, coming out in between the blockers and the wingman as several of the veteran’s shouldered their shotguns attempting to get in front of the fleeing bird their shotguns roared almost in unison dropping the bird in the adjacent grass strip where one of the  labs promptly retrieved it.

The real excitement on these hunts occurs as the dogs and walkers approach the very end of the field, as that is when birds running in front of the hunters and dogs erupt into the air, giving those hunters in the pickups the opportunity for some good wing shooting.

Nearing the last fifteen yards or so,  a half dozen roosters cackled, rose from the cover, bursting out in front of the blockers as all hunters announced “Rooster” a shootable bird to others in the hunt.

Birds blew out both sides several coming out over the blockers while others swung wide. My camera and I were in perfect position to catch the birds swing overhead and off to the side, with the blockers bringing up their shotguns swinging out ahead of the fleeing birds, the shotguns report as well as several birds falling allowing my camera to capture the entire event.

This scenario was repeated several times as we hunted one field to another, walking  row crops, CRP grasses and combinations of  row crops, tree plantings and CRP.

My cameraman worked with the blockers catching footage of some big roosters roaring overhead, veterans shouldering their shot guns, the birds coming down and “of course” those birds that flew away, having the luck to make it past the blockers and the volley of shots coming from their shotguns. However, that is part of hunting.  It is part of the experience these individuals and giving them the opportunity to get out in the field with others and enjoying the hunt.

Several of the larger tracts we walked had tight rows of corn, CRP along the edges, tree plantings towards the end and then back into the grass where the pickups with the veterans were blocking.

The first birds ran ahead and came up just before the tree planting, well out of range of those of my camera and us walkers. Those that went out to the side made the smart decision, as they escaped while those making their way over the top of the trees into the grass planting were not so fortunate as by the sound of the shotgun going off indicated that there would be several more birds added to the hunters bag limit.

Once again, as we came through the tree planting approaching the end of the walk, with  the dogs rooting out any remaining birds, flushing them out and to the side of the blockers where their excellent shooting put those birds on the ground.

It was a great event one honoring Doug Brown and all he accomplished, helping our veterans and a hunt for those in the wheel chairs and those walking with prosthesis, giving them another opportunity to hunt pheasants at the “Doug Brown” Memorial Paralyzed Veterans of America Pheasant Hunt at Top Gun Hunting Ranch.