Now you see it Now you don’t By Gary Howey 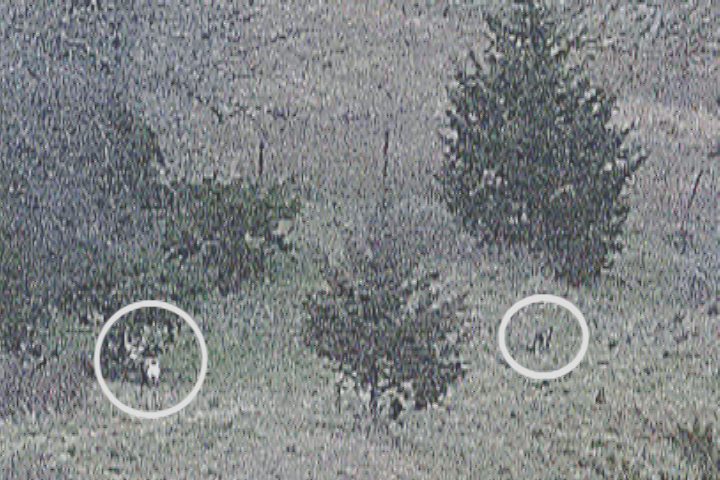 As legal shooting time begun to fade, the Mule deer buck came out about three hundred yards down in the draw.

My camera operator who zoomed in on the deer earlier indicated it was a good buck, pulling my 25:06 up to my shoulder; I put the cross-hairs near the top of the buck and fired. The buck did not flinch; I jacked another round into the chamber adjusted my scope, fired and when the round hit, the deer hunched up, but refused to go down.

I slid another round into the chamber, adjusted my aim a bit and fired. The buck jumped up into the air, crashed on his right side, kicked a few times, and was down for the count.

We celebrated for just a moment as I headed to the truck to grab my knife, and cleaning gear parked among a group of cedars not far away from the blind.   Before I could get what I needed my videographer hollered, “The deer is gone”. What, it just couldn’t be as I was sure I had hit him twice and put him down for good.

I arrived in Lynch Thursday around noon where I met with my videographer at Ponca Creek Outfitters. It was the end of the week of our Nebraska rifle deer season and there were only three and a half days before the 2017 season closed.

My videographer had been in the area for four or five days rifle hunting and took a nice older whitetail 4 X 4 and after tagging, his buck was scouting the area while looking to fill his archery tag. He had seen numerous deer, both Whitetail and Mule deer bucks, but did not want to shoot a young deer, so he passed on them as his archery tag was good through the end of the year.

While he was hunting, he scouted the area thoroughly, so he knew where the blinds where and had a good idea as to where the deer where bedded.

The first afternoon found us perched on a hill in a blind overlooking an area where several Cedar and Buck brush lined draws came together.

As the sun started to slip away under the horizon, several does with fawns came out and started grazing in the Buck brush.  We were still in the first Rut and I thought because all the does we were seeing, that a buck would be hanging around close by, but as the last half hour after sunset came to a close, nothing appeared; we headed back to the cabin.

The following morning are plan was to set up on a ridge overlooking the Ponca Creek, hoping to catch a buck running around looking for a receptive doe. My videographer had sat there one morning and spotted several deer including a nice buck. He circled the area, getting downwind from the deer trying to get close enough for a shot with his bow. Unfortunately, one of the does the buck was pursuing may have spotted him and they spooked.

We had a great vantage point as we had a large open area below us, with the creek meandering down through the bottom with a huge expanse of open pasture behind it.

On this set, we were unable to see any deer, which was not a good sign as this was during the Rut and if the bucks were not out chasing, it could mean that the first Rut was winding down, which would make hunting tougher.

Later that afternoon, we worked from pasture to pasture using our binoculars to try to locate a buck in an area where we might have the opportunity to do a spot and stalk. We saw but one buck, a good one, but he spotted us coming up the hill and charged out of the pasture up over several hills, never to be seen again.

On my final day, the heavy winds returned, and if it would be, anything like our last windy day would keep deer movement to a minimum. That morning, we went to the north side of the property, setting up in a blind on wide plateau where several deer trails converged up from the draws, all crossing well within rifle range of our blind. Once again, there was no deer movement and for our evening hunt, we would have to find a location where the deer would have the ability to get out of the wind.

Once again, we would be in the hilltop blind above the heavily wooded Cedar draw where we had seen a good number of does the day before.

On our left, it would be a slam-dunk as we called it, a shot up to one hundred yards or less. While the shot off to our right be a bit tougher it was down hill approximately three hundred yards where we had seen the deer on earlier trips. That with another cross wind gusting to thirty M.P.H. would take a little calculating. As the afternoon sun made its decent on the western horizon, it looked as if this might be a dry year for me where I would not have an opportunity to see a buck.

With less than ten minutes to go before legal shooting time would end, my cameraman indicated, “there’s a Mule deer buck and it’s a good one”.

I brought my rifle up to my shoulder, centered the cross hairs where I thought they should be at 300 yards downhill with a gusting crosswind and fired.

It must not have been close as the buck turned his head and looked over his shoulder down the draw.

I readjusted my aim, fired and the buck hunched up, but refused to go down and continued to look to the south.

My third and final shot, hit the buck solid, his front legs went down, flipping over to his right side, he kicked several times and then lay motionless.

My cameraman and I congratulated each other while I headed for the pickup to grab my knife and cleaning gear, when my cameraman who had went to the ridge to glass the buck yelled, “he’s gone”? No that couldn’t be, he was down for the count.

In the quickly fading light, we moved quickly down the hill to where the buck had laid. I used my flashlight to find blood on the ground, but couldn’t see the deer when my cameraman said he say two does go over the hill. Perhaps my buck was running on adrenaline and had made it over the hill.

With flashlights in hand, we made our way over the hill, but it was a futile attempt as it was too dark to see anything.

Back at the cabin, we viewed the video on a computer and couldn’t understand why the buck didn’t run off when at the end of the video; a lean long animal came out of the draw. moved up to the Cedar trees above, off to the right and above the deer and when the buck went down, it charged across the opening into the trees above the downed deer.

My cameraman and guide both believed it was the mountain lion that had been seen in the area the week prior and the decision was made to return in the morning heavily armed to try to locate the buck.

The following morning, after sunrise, we made our way out to the location where the buck had gone down and our camera had caught movement of the other animal.

We found an area where something had been drug, but lost the trail shortly after that. We then moved up to the other pastures where we had seen the Mule deer does go and searched them both on foot and using our binoculars.

We never found a thing, and had others look at the video with some folk’s positive it was a lion, while others think it was a big coyote.

No matter what, the deer was gone, we saw it go down “hard” but when we tried to retrieve it, it was gone.

Talk about the thrill of victory and the agony of defeat as we saw it and then two or three minutes later, it was gone. It may have seen whatever was coming up out of the draw into the trees where it laid and somehow got a second wind or something may have drug it off.

Whatever it was, it was one of those now you see it, now you don’t things and if I hadn’t seen it myself, I would not believe it either!