Patterning Turkeys With the help of game cameras By Gary Howey

The key to a successful turkey hunt is to know where the birds are going to be at a given point in the day, there’s no better way to do this than with your game cameras.

I have certain places where I place my game cameras to pattern deer and these areas; food plots, fence lines, gates, corn and bean fields are areas where I find turkeys in the spring.

In the fall after deer season, I pull my game cameras as the winter months are hard on cameras and times covered up by snow.

When I’m out doing my pre-season scouting for turkeys, I’ll put a few of the camera’s out and when I’m scouting or when hunting sheds pull the cards to see if the birds are coming through the area. If they’re using the area, the photo will tell me what time of the day they may be there.

Using game cameras in the spring cuts down on my scouting time as if the turkeys show up on my game camera numerous times and at about the same time, I now have a place and a time where I can set up and decoy a bird.

In the early spring, my best bet is to use the game camera photos to get an idea as to where certain flocks of birds are heading in the early morning. One of the first thing turkeys do when they hit the ground, is to go out to feed, but if the area you’re hunting contains dozens of crop fields, a game camera will help you narrow your search.

Good spots to have your game cameras located include, areas where the birds can move from one field to another, gates and down fence lines, if you have a mineral feeder out, it’s another good location for your camera as turkeys will come to investigate it.  If a farmer has livestock that he feeds, you can bet that the turkeys will visit that location.

You can’t hunt too close to where they’re feeding as that could be considered baiting, but you can hunt where they come and go into the area. Game camera placed along these routes will give you a good idea as to when they come through.

When I’m out searching for sheds, and I have an idea as to where the birds may be located, I use my locator calls i.e. crow calls, owl calls, and coyote howler to narrow my search area.

These work especially well late in the day just about the time the birds are thinking about going to roost. Just prior to flying up into the trees, turkeys will mill around the trees they will roost in, pecking around, getting a bedtime snack before retiring up in the trees and will respond to those calls I mentioned. Once you get a response, you’ve a good idea as to where they will be located the following morning.

Armed with the information you’ve obtained from your game cameras and your locator calls, the following morning, you can come back before the sun gets up to set up your decoys and blind.

A couple of mistakes that new hunters make are to get into the field late, as the sun begins to rise and get spotted by the birds. Turkeys have excellent eyesight during the day but once it gets dark their eyesight is poor.  However, once it starts to lighten up, even though it’s still dark, if you’re out moving around, putting up your decoys, the turkeys will know something is up.

Because turkeys roost high in the trees and since the trees haven’t leafed out yet, they can spot movement and once they do, become nervous. 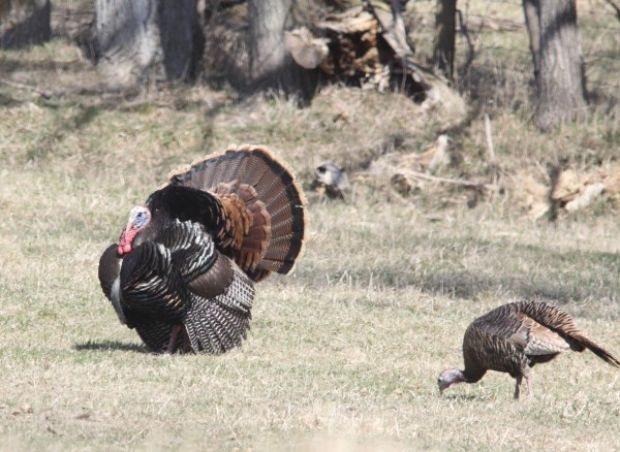 These gobblers were caught on author’s game cameras, using the same travel route from their roost tree to the cornfield where they were feeding.

Just before sunup, when the eastern sky just begins to lighten up, from the turkey’s point of view, hunters appears, as a dark shadow that’s moving will spook the birds.

You need to get out when it’s dark where you will blend in and you’ll need to be quiet as not only do turkeys have excellent eyesight, their hearing is also exceptional and if you set up too close to their roost tree, any noise you make will be heard by the birds.

Because we film, a blind is nice, helping to conceal both my cameraman and myself.  However, when putting up a blind, it’s darn near impossible not to make noise.  When we have to walk a long distance, a full blind can get heavy and that’s part of the reason our crew uses the lighter collapsible portable ground blind that has poles that stick in the ground. Our blind is approximately 27” high and stretches out to about 12′ giving us plenty of blind to set up behind.

The key to a successful turkey hunt is to have, as much information on the birds you’re going after and that’s where my game cameras come in. That and getting in when it’s dark and setting up quietly will help to make your next spring turkey hunt more successful.

← Prev: The Song of the Sandhill Cranes By Gary Howey Next: The Redlin Art Center To Unveil the Painting, "Sunrise", the first of three special paintings in “The Farewell Collection” →