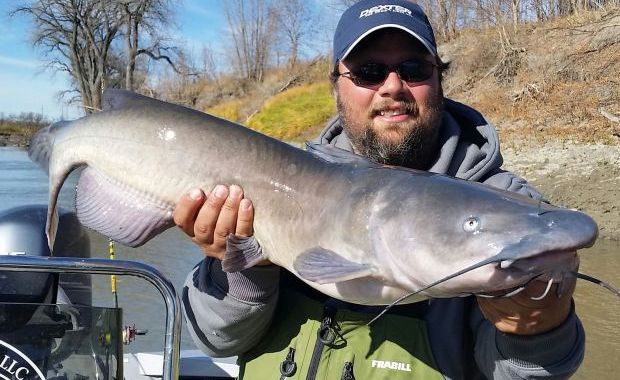 Mention Red River of the North to any fisherman in Siouxland and visions of big channel catfish will begin dancing in their minds.

There is no place on earth that produces the number of big channel catfish than does the Red.

It’s a 545-mile-long river that is born from water spilling out of the Bois de Sioux and Otter Tail rivers near Beckenridge, Minn. It flows north, forming the border between North Dakota and Minnesota before flowing into Manitoba on its way to Lake Winnipeg.

Brad Durick has guided on the Red for the past eight years, working out of Grand Forks. Currently, Durick has turned to full-time guiding, writing and educating catfish anglers.

“Catfishing on the Red should start about May 1 this year,” Durick said. “Of course if we get another weeklong cold front that sees highs in the 40s, that goes right out the window. Of course catfish bite right after the ice comes off and there are guys catching them right now, but I don’t get too excited until the water temperature hits 48 degrees. When it gets into the mid 50s, I really start getting excited.”

Durick was on hand for last week’s Fish Fest hosted by the Sioux City Scheels All Sports store at the Southern Hills Mall.

“We’re going to have very low water conditions this year,” he said. “There will be no flood this year or the threat of one.

“I would not say that low water makes fishing tough,” he continued. “It just makes it different from what you are used to. You fish more in the channel of the river than you do when dealing with high water. The fish will be working the current seams just as they do in high water, but it will be more toward the middle of the river.”

Durick guides out of both Grand Forks and Drayton, N.D.

Mention Red River of the North to any fisherman in Siouxland and visions of big channel catfish will begin dancing in their minds.

“There’s about 70 miles of river between them and it’s like two different worlds,” he said. “Below the low head dam at Grand Forks, it’s pretty wild. Lots of logjams, a lot of structure you have to sift through. However when you get up to Drayton, it’s like a mini version of the Red at Selkirk, Manitoba.

“There’s nothing,” he continued. “They have a low head dam up there and when you get above it there are some holes, but no structure. When you get below the dam it becomes very traditional. Then you look at the corners, look at the holes, and in a lot of cases the big hole is only 3 feet deep.

“So, above Drayton, it’s looking for those subtle holes and down at Grand Forks it is looking for wood structure,” he said.

The Red River has long been known as a trophy catfish stream.

“There’s a fallacy that you can go up there and the fish will average 25 pounds,” Durick said. “I wish I could say that was true, but it is not. You’re going to average 9 or 10 pounds and you are going to have a shot at a 15 or maybe 20 or 20 plus. It seems like I can get something over 15 pounds almost every day.”

Durick outfits his clients with 7 1/2-foot Rippin Lips medium-action bait casting rods with Abu-Garcia reels filled with 30-pound-test Ande monofilament line. He uses the standard catfish rig consisting of a no roll sliding sinker and a Rippin Lips circle hook in size 7/0 or 8/0.

“We use cut bait most of the time,” he said. “Early on it is sucker then later in the year Goldeye becomes a factor. We often use Leopard frogs, too, but I don’t think there will be a frog bite this year. It’s been too dry.”

Durick wrote “Cracking the Channel Catfish Code” in 2013 and the book has been selling well. In fact, the Sioux City Scheels store remains the number one retail outlet in the country.

The book is also available at his web site.

“I’ve got an outline for another book but I’ve been too busy to work on it yet,” Durick says. “I’ve been doing a lot more writing and talking during the off season since I’ve turned to this full time.”

For more information about Brad Durick Outdoors, check out his web site at: www.redrivercatfish.com.