The red line below my tungsten jig on my Vexilar locator rose up from the bottom slowly indicating a fish was moving up to my bait. Peering down into the clear water, I could see the perch moving up to the same level as my jig.

I twitched my bait ever so slightly as the perch moved in on it and inhaled my micro jig and wax worm. As I brought my rod up, I felt the added weight and set the hook bringing the first of the numerous perch we would take on this trip.

Team Member Larry Myhre, Sioux City, Iowa and I were ice fishing on Big Stone with Tanner Arndt, a guide from Artie’s Bait & Tackle of Ortonville, Minnesota.  Tanner knew the lake as Larry and I had spent time on the water with him on a spring fishing trip, one where we caught good numbers of crappie, bluegill and bass.

Ortonville lies along the east shore of Big Stone and is a thriving community; with excellent schools, new housing developments, a large hospital, year round recreation possibilities, an eighteen-hole golf course and an area where you will not find finer people.

Big Stone is a large lake, part of the waters forming the border between northeastern South Dakota and Western Minnesota. It is one of the numerous glacial lakes found in South Dakota and Minnesota, a twenty-six miles long body of water averaging around one mile wide.

On this trip, we were after perch, one of the numerous species of fish that inhabit the lake along with walleye, northern pike, bass and bluegill.

Perch, have a tendency to cruise throughout the lake, not spending much time in one location and when our indicators showed perch under our house, we did our best to get them to hit our lures before they moved on.

If they moved off my bait, depending on the direction they were going, we would let each other know they were on their way, giving each a little warning to be ready and to look for them to arrive.

It was early February, when it can be a the slow time for ice anglers as the fish moved from their early ice bite where they were still feeding and it would be a good month away before  late ice when the fish began to feed again.

This was the time of the year, when to a falling barometric pressure seemed to be a good sign, as when the pressure dropped, the fish seemed to be a little more eager to take our baits.

We were in one of Artie’s Ice Castles, a large icehouse equipped with lights, heat, and television, fold down beds. cooking stove and a bathroom, which allowed us to fish very comfortably beings the outside temperatures, were well below zero.

I was running the camera, so Larry and Tanner kept me busy and when, my Vexilar showed fish below me, I had an opportunity to catch a fish or two, some were keepers while others, the smaller perch we released.

We were using small tungsten jigs, as tungsten is heavier than other metals, allowing you have smaller heavier baits that sink quickly down to where the fish are holding.

Throughout the day, schools of fish moved in under our Ice Castle, where we would pick up a fish or two and when things slowed, one of us would switch rods and put down attractor bait, a small Jiggin Rap, rattle spoon or some other larger bait to draw fish into our area.

This was a tactic our late friend Jim McDonnell, of Royal, Iowa used quite often, taking it to an extreme, using a larger spearfishing decoy to attract the fish.

Once our locators lit up, indicating fish, Larry and Tanner would pull one or two out before the other fish lost interest and moved on.

As I looked down into the water, watching for perch a huge walleye approached my bait, I did everything I could come up with to get this huge fish to look at my tiny little bait. My efforts were in vain, as all I managed to do was to cause the big fish to glide off to the side of my bait as it moved on.

Later that day another huge walleye, perhaps the same one I had seen earlier swam in under Tanner, it too ignored his bait as it swam off looking for something larger than we were offering. 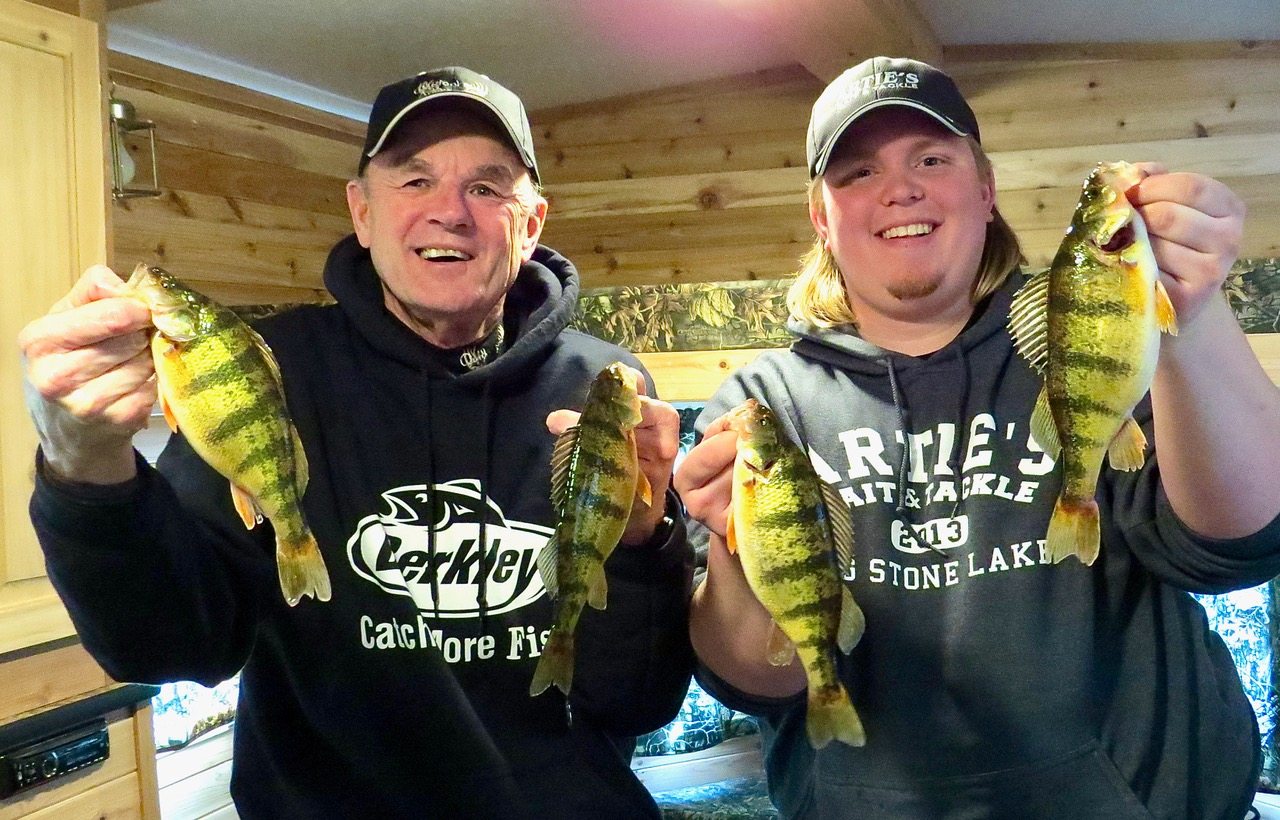 Author and Artie’s Bait & Tackle guide Tanner Arndt with a few of the perch they took while filming on Big Stone in Northeastern South Dakota.

The perch continued to come through, but just were not overly aggressive, perhaps it was the high pressure or the clouds that moved in throughout the day, as many of the fish just looked at our baits or nipped at them, not really biting it.

Larry, once again had the hot rod, having fish under him much more than Tanner or I, landing the better part of fish in that nine to eleven inch range we took home.

We had another great fishing trip to the Ortonville area, to Big Stone and is one we plan on doing again as it offers great fishing, no matter what the season and is an area that is rich in history.

More information on the Ortonville area and Big Stone Lake go to www.bigstonelake.com

For information on fishing, Big Stone and icehouse rentals check out Artie’s Bait & Tackle at https://www.facebook.com.

← Prev: New Products at SHOT Show 2018 By Gary Howey Next: The Importance Of Pollinators →