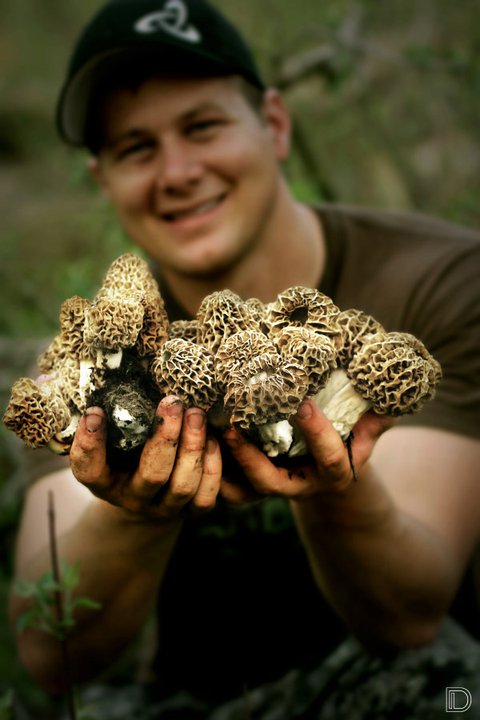 Morel mushroom hunter, Dustin Lutt with a mess of mushrooms he found along the Missouri River when he resided in Vermilion, South Dakota. (Dustin Lutt Photo)

No matter where you live, springtime is when Mother Nature’s Garden starts to grow and mature, unlike the gardens we put in Mother Nature doesn’t see the need to plant her garden in nice neat rows like we do.

When gardeners see weeds and grasses growing in their garden, out comes the hoe, not in Mother Nature garden as she has the right plan, allowing anything and everything to grow in her garden.

It won’t be long before the hunters we’ll be in the field, sandbars and wooded areas, not worrying about wearing camo, or about scent proofing themselves, they won’t carry a gun and still bring home something for dinner.

It’s that time of the year, when morels and asparagus show up in the upper Midwest, with both of these wild edibles poking their heads above the ground, waiting for someone like you or I to come along and pluck them from the earth.

Morels pop up in the spring and are one of the finest eating wild mushrooms found along the river or in the hills, coming up in spring and will dry out quite quickly if not picked.

Asparagus makes its appearance later in the spring, coming up in the same location every season.

Before we get into, the what, when and where of mushroom and asparagus hunting, there’s one thing we need to remind ourselves of.

With any type of hunting or picking, permission of the landowner is needed before entering their land.       Once you find mushrooms or asparagus, it’s not a bad idea to offer to share them with the landowner, which will help you to have permission to search for their land next season.

Morels show up before wild asparagus and found throughout the Midwest, easy to recognize, delicious eating and the most popular wild mushroom in the upper Midwest.

They don’t look like those mushrooms found in a store, as you’ll be looking for something that resembles a tan elongated brain growing out of the ground one with dark brown pits, making morel mushroom easy to recognize.

Depending on where you find them, their colors may vary from light gray to dark gray, light tan to golden brown or a pale yellow.

Usually, the week of Mother’s Day, May 10th this year, has always been the time of the year when mushroom hunters start getting serious about hunting for morels,  but the way the weather changes in the Midwest, you need to have some way of knowing when they appear.

There’re quite a few indicators, that help you know that it’s time to start looking for mushrooms.

If there are lilac bushes, crab apples or violets in the area where you live, starting to bloom, it’s about the time mushrooms begin to appear.

Others, shroomers as they’re known down south, go by the almanac to get an idea when they’ll appear; they figure our average date for the last frost, and then add two weeks to the date should be close to the peak morel season.

As with most things, moisture, sunshine and warmer temperatures are big factors when morels appear, a week of 55-60 degree daytime temperatures after the frost is gone and no freezing temperatures at night are a good time start checking your spots for mushrooms.

Along with warm temperatures, moisture is also important; with many serious mushroom hunters indicting the best time to hunt for morels is after a rain, when temperatures are around 60 degrees and a day with high humidity.

These mushrooms appear earliest in sandy areas, on south facing slopes or in fields that have been burnt as these areas warm up quickly,  retaining heat longer.

Earliest morels seem to appear on islands in and sandy areas along the river and areas where there’re dead, decaying or dying trees.

The first morels seem to be the toughest to locate as they blend well with the forest or vegetated ground and when you’ve found one, kneel down, looking closely because morels like schooling panfish, when you find one, you generally find several

There’s no set rule as to where the morel might be found, as conditions change from day to day in the spring, a hillside barren on Monday may get a rain shower or warmer temperatures, causing the hillside to be loaded with morels by Wednesday.

My preferred method on locating mushrooms is not really scientific; it’s the old meandering method, picking my way through the vegetation until I locate them.

It’s not a bad idea to stop from time to time, to kneel down, allowing you to get a better view of the area as many times, morels will be pushing up under the leaves and can be hard to see.

Mushrooms reproduce through spores, with the spores needing to be returned to the ground in order to grow, to keep this process going, allowing morels to throw their spores, use porous collection bags, such as an onion bags or some type of a bag that allows the spores to be release back into the air.

Mushroom hunters down south or shroomers as they are called have their own language and in mushroom hunters’ jargon, a bunch of morels is known as a “mess”.

Once you have found a mess of mushrooms, they need to be cleaned up and preserved or prepared.

First you’ll want to split the mushroom in half from the top to the bottom, rinse them off over running water as the crooks and crannies of the mushroom contain sand or insects.

After having rinsed them thoroughly, you’ll want to let them set in water for a short period in order to flush out any remanding sand, debris or stubborn insects,  after rinsing them, let the mushroom drip off on a dry towel, you want them moist, but not too wet.

Don’t let them soak in water for an extended period as they’ll soak up the water and become spongy.

Then best part of morel hunting begins, preparing and eating them, and there’re numerous ways to prepare them, some of these include fried or in mushroom soup.

One of my favorite ways to prepare the morels is to fry them up using some type of batter, with an excellent batter that’s made by mixing equal parts beaten eggs with milk and crushed up saltine or some type of crackers, then dip in the mixture, coating the entire mushroom.

Place the coated morel into a pan and cook in butter until crisp. Don’t overcook them, as they’ll dry out, becoming crunchy.

They’re best when prepared fresh, but if you have a good mushroom hunting season and would like to preserve or save some of them for future use, mushrooms can be dried, dehydrated, frozen or blanched.

Then there’s wild asparagus which shows up about the same time as mushrooms, but I have had my bet luck finding mature spears after mushroom picking is done when temperatures warm up.

It appears later than the ones found in your neighbor’s garden as gardens are clean and generally, in darker soil, with the ground in a garden warming up earlier.

Ground where wild asparagus grows may be covered with last year’s grasses and plants, so the soil that it grows in won’t warm up as quickly and will appear later.

To locate last year’s plants those that have gone to seed, look for a golden color clump or bush and resembling dried up thin tumbleweed, with the new growth growing in among last year’s plant.

Once you’ve found your first asparagus, scout the area carefully for new growth as the seeds of the older plants may have dropped or blown a short distance from the original plant.

Along fence lines, power lines, old railroad right of ways are excellent places to look for wild asparagus as is anywhere birds might land or congregate.

Once the asparagus goes to seed, in the fall, the birds will eat the berry off the plants, fly off and then pass the hard pit or seed, which drops on the ground and if conditions are right, a new asparagus plant will sprout.

Both asparagus and morels need warm soil and moisture to grow, making sandy areas along fence lines one of the areas where asparagus comes up first.

If you find asparagus along a fence line, and there is a shelter-belt-tree planting nearby, check them out closely as the birds will have also set in the trees and may have deposited seeds in those areas.

Asparagus gets woody, it’s best to harvest the tender shoots; this doesn’t mean that the larger taller stems won’t be edible, but they’re the ones that should be left to go to seed for future crops.

When gathering asparagus, it’s best to carry along a small knife, cutting the asparagus off where it comes out of the ground.

Preparing asparagus is easy, simply cut off the dried up end, rinse and prepare, my wife and I enjoy asparagus and to prepare it, we simply boil it until tender; top it with some butter substitute, a little Mrs. Dash or other seasoning or wrap the asparagus in bacon, cooking it on the grill, until the bacon is about done, serve with the seasoning you like and then pig out.

Hunting these wild edibles is an excellent way to get outside and enjoy the outdoors and these things, Mother Nature provides.