The Change In the Outdoors   By Gary Howey 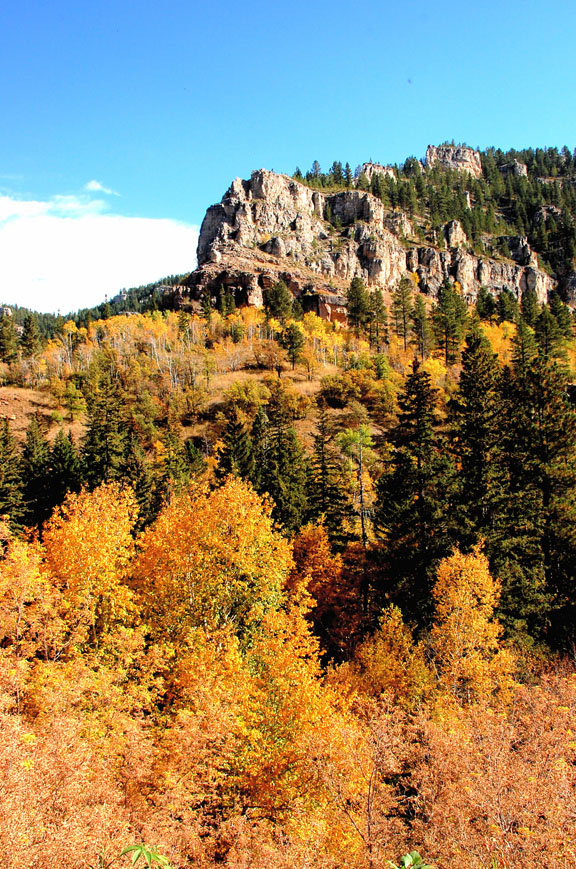 Things in the outdoors change, sometimes these changes happen slowly while other times, it may take a bit longer. Change is something we outdoor folks have to get used to and put up with, as the only thing happening in the outdoors, you can count on arriving about the same time each year would be the fall colors, like those pictured in the picture found in Spearfish Canyon in South Dakota. (Larry Myhre Photo)

No matter what you’re doing in the outdoors, there’ll be a change, something will be different each time you go out or different than it was last year.

One of the things that will change is our weather, from fall to winter on December 21st and in past years by this time, we had measurable snow cover, now for the last couple of weeks, our weather has been balmy and by noon it had warmed up enough, when you went outside, you didn’t need a coat.

Another example was a comment Team Outdoorsmen Production member Bill Christensen, Hartington, Nebraska made this morning while we were having coffee at Keith’s.

He’s an avid outdoorsman, hunting, fishing and enjoying the Great Outdoors, the guys, Marv, Jim, Gary, Tom, Bill and I were talking about what’s going on in our outdoors, Bill mentioned “there’s a lot of changes that affect the outdoors, take for instance waterfowl hunting.

Last year, out of our South Dakota blind, the guys shot numerous Canada geese and a large number of ducks as they migrated through.

This year, because it’s an open winter, with warmer temperatures, waterfowl up north doesn’t need to move south.

They will leave the water later to feed as they aren’t burning up a lot of energy during the day to stay warm, so they aren’t needing much to eat as they did when the weather is cold.

A lot of the waterfowl are still enjoying the warmer weather up north, not coming through until the lakes and ponds freeze up and the food sources are covered up.”

The strange November weather affected other things, including the deer rut, as the bucks needed a little colder weather to really get active, there were many running around, but when it’s warm and when chasing, looking for a receptive doe, they heat up quickly.

Unless they find a receptive doe and move her into its hide, it’s harder on them as they will put on a lot of miles, as well as fighting other bucks, their competition and when it’s cold, they don’t get overheated.

As predator hunters, we’ve noticed the change in coyotes and other predators, they like other critters this year, don’t have to travel through snow or fight cold weather, so they too don’t need to expend much energy to feed.

In the winter, with its wind and cold weather, predators are easier to call because they need to be feed continually in order to stay warm and when they hear our distress call of a dying rabbit, they’ll make tracks towards that sound, looking for an easy meal.

Fisherman have to deal with a lot of changes, which include the weather, a dry year, drought, low and high water, and the freeze up.

All of the above-mentioned things will be a huge change the fish have to deal with, to adapt to survive the long winter,

In the Fall, before the freeze up, they’ll pig out, feeding heavily, putting on fat reserves so they can make it to spring, where they’ll spawn.

Since they’re cold blooded, as the water temperatures cool, their metabolism will slow down, and they’ll not need to feed much through the winter as they live primarily on their fat reserves.

That doesn’t mean they quit eating all together and when an easy meal shows up, a jig with a wax worm or a minnow, they’ll look it over and may take it or not.

Once we have good ice, since there is not much if any snow on the ice, ice fishermen, we need to pay attention to the amount of noise we make while going across the ice, digging our holes and when setting up, especially if you’re in shallow water.

The noise you make, the vibrations will be carried through the ice, causing a change in the water pressure and felt by the fish through their lateral line, where they may move out a distance from where they were and once the noise is at a minimum, move back in under your hole.

There are some fish, especially pan fish that may be attracted to the noise of your auger going through the ice, it’s been said that as the water turns to ice, some insects or other things may had been frozen in the ice and released as the auger breaks through, drawing the panfish toward the noise.

There are times, when a change is good, but there are also times when things need to change in the outdoors, in order to make things happen, and if they don’t appear, things in the outdoors may be held back, changes, things that happened on this date a year ago may have happened earlier or still coming.

No matter when things change, it’s a great time to be out and about, enjoying everything in the Great Outdoors, all that old Mother Nature offers us.

Gary Howey is an award-winning writer, producer, and broadcaster and inducted into the “National Freshwater Fishing Hall of Fame” in 2017. He developed and was the Producer- Host of the Outdoorsmen Adventures television series for 23 years and is the Host of the award-winning Outdoor Adventures radio program carried on Classic Hits 106.3, ESPN Sports Radio 1570 in Southeastern South Dakota, KWYR Country 93 AM and Magic 93 FM in Central South Dakota, As well as on KCHE 92.1 FM in Northwest Iowa.  If you’re looking for more outdoor information, check out garyhoweysoutdoors.com, and outdoorsmenadventures.com, with more information on these pages, Gary Howey’s Facebook page, Outdoor Adventure radio and Team Outdoorsmen Productions Facebook page. The Outdoor Adventures television show is available on the MIDCO Sports Network and News Channel Nebraska.