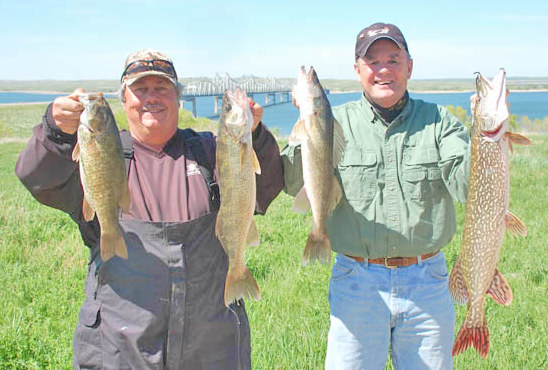 Gettysburg guide and Watertown Native Chuck Krause and Gary Howey with a mixed bag, left to right a smallmouth bass, sauger, walleye and northern taken during the spring bite on the Missouri River near Gettysburg. (Larry Myhre Photo)

Spring, arrives the 19th of this month, it’s the time that anglers like myself have been waiting for “not so” patiently.

This late winter, some anglers have been fishing below the Missouri River Dams and picking up some nice fish, but most of us warmer weather anglers will wait until temperatures rise before heading out.

One of our early morning coffee drinking buddies at Keith’s, here in town headed to Chamberlain on last Monday as the word is out that the jig bite is on, but we haven’t heard much from him as it looked as if a cold front moved through that area.

I spent most of the weekend, getting things ready on my old boat, having the tires balanced on the trailer, wheel bearings packed and the inside cleaned up as I had drilled some holes to mount rod holders etc. and wanted to get all the metal filing cleaned up before they made their way into my bilge pump.

Another thing I always like to do as soon as the weather warms, before getting the boat out is to re-check and if needed, re-charge my batteries, then let them set a few days and check to see if they’re holding a charge.

This year, it looks like one of them didn’t make it through the winter, as its dead in a couple of day, so I’ll need to replace it.

The primary fish, anglers are fishing for on the Missouri River is walleyes and their smaller cousin the sauger.

The South Dakota state record walleye is also one that weighed 16 pound 2 ounces, with the state record sauger coming in just under the Nebraska record at 7 pounds 7 ounces.

Depending on where you’re fishing, take for instance the Gettysburg area on the Missouri River west of Watertown along Highway 212, the biggest percentage of your catch there will be walleyes, but you’ll also catch sauger as  they’re a river fish, better adapted to current and more aggressive that their large cousins the walleye.

Since they aren’t using much energy, kind of just hanging around, they won’t need much food, and if it’s not just in front of their nose, they won’t move far to grab a snack.

You’ll also want to down size what you’re using while fishing cold water, going with a lighter rod, smaller line and smaller lures and much of the time, simply allowing your bait to drag along or just off the bottom.

It’s also not a bad idea to go with a shorter lighter action rod with a small open face reel, rigged with nothing heavier that six pound test and tied at the end of it, a 1/8th ounce or smaller sinker, split shot or jig depending on the speed of your drift.

Before dropping your rig down, you’ll want to check your drag, making sure that it’s working properly.

If this is your first trip on the water since putting your rods and reels away last winter, and if you didn’t back your drag off when you stored your rod & reel, there’s a pretty good chance that your reel drag could be frozen up.

To check it, back off on the drag and pull some line off the reel, if the drags not frozen, it will release, allowing line to come off the spool with very little pressure, if it’s frozen and won’t give, you need to remove the spool and work the drag washers back and forth until they release, reattach the spool, then adjust your drag to where you’re comfortable with it,.

If a big fish hits and peels line easily, you’ll need to adjust the drag, not too tight that the fish will break off, just tight enough to allow you to gain line on the fish and tire it out.

When fishing cold water or cold front situations, you’ll want to keep your bait as straight up and down as possible to detect the light spring bite and if you allow your bait to drag out too far behind your boat, you’re asking for trouble as this is when you’ll find yourself snagged.

If you have no trouble holding directly over the fish, there’s been a lot of fish caught using a light live bait rig that includes a light split shot about eighteen to twenty-four inches above my hook and minnow,  jigging it ever so slightly up and down, bringing it  just off the bottom to help attract those slow biters.

For a jig, I want one that can drag across the bottom and still have my minnow up off the bottom, which is a natural position for a minnow that’s feeding, I like to use the Northland Stand-Up Fireball-Jig that not only holds your minnow up, it also has a location on the top of the jig to attach your stinger hook.

Many of your short bites will be sauger as they’re notorious for holding onto the minnow until they’re near the surface and then letting go,

When I’m getting these short bites, where the fish grabs a hold of the back of the minnow and then let’s go or I reel up to find that all that’s left of the minnow is its head, I’ll add a stinger hook, which is no more than a short piece of monofilament line or wire with a single or treble attached to the end.

The stinger hook is slid over the hook or hooked directly to the upper eyelet on some jigs, like those I mentioned above.

If you’re fishing a body of water with a clean bottom, a treble hook stinger works best, but when fishing an area with a lot of snags, it’s best to go with the single hook stinger.

Then reel up the slack, on the live bait rig or pull back slowly on your jigging rod, and if you still feel the added weight, then set the hook.

The best eating fish are the smaller ones and unless you’re going to mount a big fish, why not take a picture with your phone and release those larger fish.

You’ll be able to impress your buddies with the pictures of the big fish you caught without having to drag the fish to the taxidermist, knock the heck out of your bank account to pay for it and then taking it home to get the wives permission to hang it on the wall!

Good luck on the Lite Spring Bite and maybe we’ll see you on the water!

Gary Howey, a 1968 Watertown graduate, now residing in Hartington, Neb. is a former tournament angler, fishing & hunting guide,  an award winning writer, producer, photographer and broadcaster, and a recent inductee into the “National Freshwater Fishing Hall of Fame” in 2017.  Howey is a syndicated “Of the Outdoors” columnist, with  his columns appearing in South Dakota, Minnesota, Kansas, Nebraska and Iowa , he’s the Co-Host of Outdoor Adventures radio heard in South Dakota, Iowa, Nebraska and Minnesota each morning throughout the week at 6:45 am. If you are looking for more outdoor information, check out Gary’s blog at garyhoweysoutdoors.com, outdoorsmenadventures.com and like Gary Howey’s Facebook page. Also, tune into the Outdoorsmen Adventures show on KCAU-TV, Sioux City, MIDCO Sports Channel and watch the shows on www.MyOutdoorTV.com