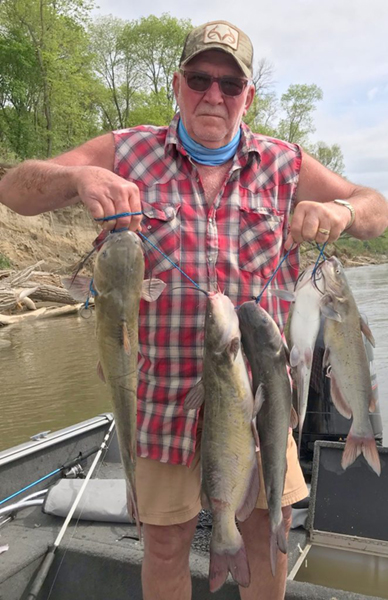 Authors fishing partner Larry Starman with a few of the channel catfish that he and Gary Howey caught on a recent fishing trip on the Missouri River. (Gary Howey Photo)

It seems as if everything is happening later this year, than in years past, with some outdoorsmen and women wondering when things will begin to appear.

Much of it is due to the weather, as it’s been a cold windy spring, and numerous things in the outdoors need warmer temperatures both during the day and in the evenings.

Thirty degree evening temperatures, really sets things back, with both ground and water temperatures being cooler than in years past.

Mother’s Day was last week, which is generally the most opportune time when mushrooms appear, but with the colder temperatures, they’d just began to appear, with the cooler temperatures also affecting the wild asparagus harvest.

Several weeks ago, I and Larry Starman, Wynot, Nebraska was on the river fishing for catfish, with the water temperatures still very cold.

This week, we decided to try it again, hoping the water temperatures would be warmer with the catfish bite picking up.

Once on the water, it was obvious that the temperatures had warmed by just a few degrees, so we weren’t sure how the bite would be, as catfish are most active above 70 degrees water temperatures and very active feeders in temperatures up to 85 degrees.

On our last trip, we fished the Nebraska side and just before heading back to the dock found a snag on the South Dakota side that seemed to have some better fish.

That snag lying just below a nine foot hole would be our starting point on this trip.

Larry maneuvered the boat to the top side of the hole, where I tied off to a tree that had fallen into the river.

Larry doctored up my catfish worms with gobs of the stinky Sonny’s Catfish Bait and then added it to his worm as I cast out to where the swift current came up against the trees lying in the slack water pocket.

The worms we were using were some that Larry had made from small diameter three inch piece of surgical tubing; he’d punched numerous holes in them, giving us a way to pack the stinky concoction into the worm with a treble hook protruding out of the bottom.

The worm’s leader was tied to a snap swivel, completing the rig with a two to three ounce, line through weight sinker allowing the rig to hold in areas with stronger current as well as letting the catfish to move off with the bait while feeling little resistance.

Less than a couple of minutes had gone by as I’d put my rod in the rod holder, when I was about to put my second rod out, my first rod started bouncing around, indicating a bite.

Grabbing the rod from the holder, and setting the hook hard, it was obvious that this wasn’t a young of the year catfish.

My rod was bowed and my drag singing as the catfish did it’s best to get back to the snag from where I’d pulled it out of.

Holding my rod high and tightening my drag, I started to bring the fish up, I indicated to Larry, It felt like a good fish, but since it had moved out into the current I wasn’t sure.

Just then, the fish’s tail broke the surface of the water, with Larry indicating, “That isn’t a dink, it’s a good fish.”

Like most catfish do, the fish had spun several times and not only hooked in the mouth but also had my line wrapped around it.

As I brought the fish to the side of the boat, Larry netted a good five pound plus cat, not a bad way to start out the day.

Shortly thereafter, Larry landed another nice fish, and had just dropped it into the live well when one of my rods bounced and stayed down and as Larry grabbed the net, my second rod started jumping around, Larry dropped the net and grabbed the pole and for a short period of time, we had two fish on.

The cat on my second rod got off, with mine still on, and as I got it to the boat, it was another good five pound fish.

Larry tied into a good fish, but half way to the boat, it managed to get hung up in a snag, he tried several times to winch the fish from it, to no avail.

He then released line, hoping the fish, feeling no pressure would swim out of the submerged snag into open water.

It took two attempts, before the cat swam out of the snag, but when it did, Larry was able to bring it to the boat and my waiting net.

The bite died approximately forty-five minutes after we arrived, so we untied from the downed tree, moving up stream to fish several of the downed trees and snags that catfish love to call home.

At each snag, we were able to catch some nice catfish, and as the day went on, the last hole we’d fish would be the first spot we tried.

We slipped into the upper downed tree, tied up and just as we left it, there were several nice fish lying beneath the snag.

Larry and I finished up the day with thirteen keeper catfish, all but a few were 2 pound plus fish, which will be some fine eating for us.

Catfish are one of the most abundant and most underutilized fish in the river and when fishing flowing water, streams, canals or reservoirs, the bag limit is ten per day with a possession limit of twenty.

As the water temperatures rise, the catfishing will only get better, continuing throughout the summer, and are eager biters, making some excellent eating.

They’re great fighters that’ll dive deep when hooked, test the strength of you and our equipment, rolling over and over trying to dislodge the hook, giving you a fight to remember.