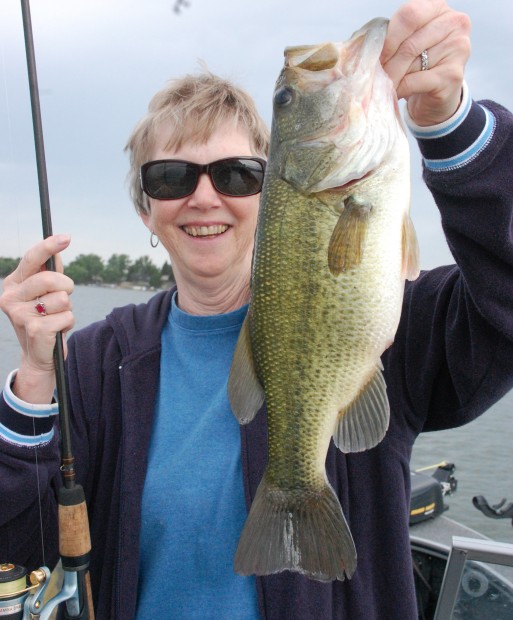 Fran Myhre, Sioux City, IA with a good largemouth bass taken while fishing with her husband, Team Outdoors Production member Larry Myhre, the fish came from one of the many glacial lakes in northeastern South Dakota. (Photo by Larry Myhre)

You’ve seen them on television; read about them in magazines and watched them on the internet, what are they, they’re bass.

Both the largemouth and the smallmouth bass have a huge following, especially down south as the bass are bigger compared to our bass up north as we have a shorter growing season than they do.

The different sportsman’s groups like BASS, hold tournaments with big payouts, where competitors run long sleek fiberglass bass boats with at least a two hundred horsepower motor, fishing big water with huge screen electronics, locators, not one but two or three huge locators that can not only pinpoint fish below their boat, but off to either side of their boat.

You won’t need all of this in order to go after bass, as most ponds, gravel and sand pit as well as smaller lakes in South Dakota and Nebraska contain largemouth bass.

When I fished with the Yankton, South Dakota, Lewis & Clark BASSlanders, we held our bass tournaments and caught bass on small lakes and in the Missouri River.

These hard fighting bass are two of the most popular freshwater game fish in the United States, with the largemouth putting up a great fight when hooked, going deep or into the grass or submerged snags, then airborne, but the king of fighters is the smallmouth bass, the “Bulldog of the deep” they’ll test your skill at landing fish.

These hard charging fish, once hooked go deep, then under the boat and just that quick, tail walking along the surface only to go deep again.

If you’re after smallmouth, then you’d have to fish the Missouri from Lake Oahe, Lake Sharpe Lake Francis Case and the upper reaches of Lewis & Clark Lake.

Those that are looking for an opportunity to catch a state record fish will need to have your ducks in a row as the South Dakota state record largemouth is nine pounds three ounces which came from a gravel pit.

The state record smallmouth, a bruiser tipped the scales at seven pound three ounce coming from Horseshoe Lake which is one of the Glacial Lakes near Webster.

If you don’t catch a record breaker, and catch a good fish, you can apply for the South Dakota Proud Angler award. To qualify for this award, you’ll need to catch a largemouth bass of at least five pounds or one in the Catch & Release category that is at least twenty inches long.

In order for a smallmouth bass to qualify it must weigh 3 pounds or for the Catch and Release award must be eighteen inches long.  More information on these awards, is available at https://gfp.sd.gov/proud-angler/

Nebraska’s state record largemouth tipped the scales at ten pound eleven ounces, and it came out of a sandpit, while the seven pound four ounce state record smallmouth was taken from the Missouri River above Lewis and Clark Lake, in Knox County.

In Nebraska, their Master Angler award for a largemouth bass, the fish must weigh at least five pounds or for a Catch and Release award it must be twenty inches long.

For the Master Angler smallmouth award your fish needs to weigh three pounds or better, or the Catch and Release award it has to be eighteen inches long. More information on these awards is available at http://outdoornebraska.gov/masteranglerawards/

As far as the records for these two species that were caught in the United States, both records have been around for many years.

Both bass are nest builders, with the males coming into shallow water, using its tail creating this nest, then the eggs are fertilized by the female, with the males standing guard over the eggs and fry until the fry can be on their own.

When the bass are shallow in the spring, excellent baits to use would be small jigs 1/8th & ¼ ounce with plastics such as Northland Tackle’s Impulse Bro’s Blood worm or Swin’n Grub worked slowly around and in the nest.

If the bass doesn’t take the bait at first, don’t give up; keep working the jig until you irritate the bass where it will pick up the intruder, moving it away from the nest.

Once the fish picks up the bait, set your hook hard, landing the fish a quickly as possible, snap a few photos and then release the fish, allowing it to get back to protecting its nest.

As the season progresses, bass will move deeper, adjacent to submerged logs into the weed beds and along drop offs.

This is when smaller jig & pig, crankbaits and Northland Tackles Impulse Jig Crawler work well when pitched into the shallows and worked slowly into the deeper water.

If you’re fishing early morning and late afternoon when the sun is at its lowest point, you’ll find that bass move shallow to feed and can be located on the shady side of submerged logs, tree stumps and in and along shoreline vegetation that grows from the shallows out into the deeper water, giving them easy access to deep water.

If you’re not into artificial baits, they can be caught using live bait rigs, when using these rigs in deeper water, the old slip bobber rig works well.

One thing we need to keep in mind, especially when fishing smaller ponds is the predator to prey relationship, as bass keep the panfish population down and if you take to many bass from a smaller pond, you could end up with too many panfish, with nothing but a small panfish pond.

No matter what pond or body of water you’re fishing, you can bet they hold bass, which will give you a fight to remember.

Gary Howey, Hartington, Neb. is a former tournament angler, fishing & hunting guide,  an award winning writer, producer, photographer and broadcaster, a recent inductee into the “National Freshwater Fishing Hall of Fame” in 2017.  He developed and was the Producer- Host of the Outdoorsmen Adventures television series for 23 years. Its new season begins on April 4th with Outdoorsmen Adventures airing throughout the upper Midwest. Howey is the Co-Host of the Outdoor Adventures radio show and if you are looking for more outdoor information, check out garyhoweysoutdoors.com, outdoorsmenadventures.com and like Gary Howey’s Facebook page, and tune into his shows on MIDCO Sports Channel as well as being broadcast to over two million  households throughout the upper Midwest and watch the shows on www.MyOutdoorTV.com