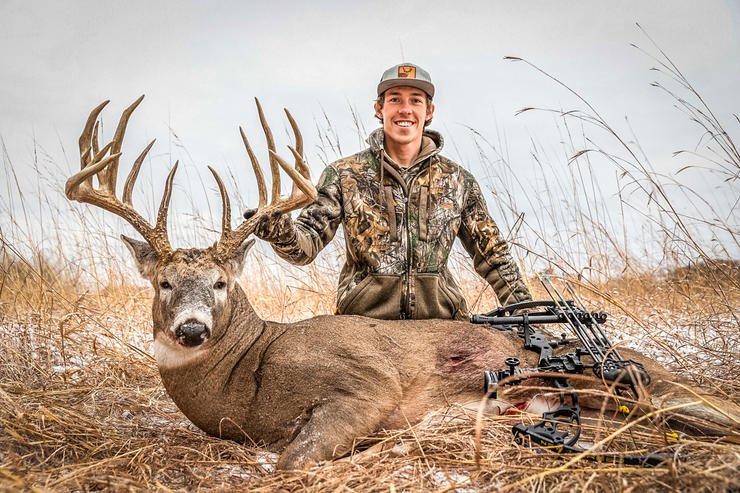 The young buck in Leo Van Beck’s 2017 trail camera photo showed incredible potential. It was already a 140- to 145-inch 10-pointer as a 2- or 3-year-old. Van Beck, as well as his father, Marti, brothers, uncles and cousins all live and hunt near Sauk Centre, Minnesota, near where the deer called home. Needless to say, each of them hunted — and hoped to tag — the dandy buck.

In 2018, the deer blew up into a 170-inch 12-pointer. It spent time on both private and public land. “Bucks that size are not common around here, especially on public land,” Van Beck says. “This deer was really sporadic. We’d get photos of him from time to time. In early November, he broke off his entire left side right above the brow tine.” Mainly for that reason, they didn’t target the deer for the remainder of the 2018 season. Interestingly, the buck was known to travel at least 4 miles between two areas the family hunted.

Fast forward to the 2019 season, when the buck made the first appearance of the year on Van Beck’s uncle’s farm in October. It’d grown into a true giant. The entire family was stunned.

Shortly after, the buck showed up on camera near Van Beck’s preferred public hunting area, and it was go time. Within three hunts, he became convinced the deer was bedding in an area on state land that few others hunt. On October 27, he headed into the area with a stand on his back. He struggled through thick cover looking for deer sign. “It was a jungle covered in buckthorn and downed trees at every angle,” Van Beck says. “There’s no way to walk anything close to a straight line. I remember wondering how a deer could even walk through the stuff.”

But he found a magical spot loaded with big scrapes and rubs, and where high swamp water funneled deer into a predictable pattern. That’s where he hung his stand and climbed up for the remainder of the day. Seeing nine deer that evening gave him confidence in the spot.

The buck walked through an opening and I realized it wasn’t just a nice buck. It was him.

One November 1 (the following Friday), Van Beck didn’t have classes. So, he set out for an all-day hunt in the jungle. It was dead calm at daylight but then, things got interesting. “A doe and two fawns worked their way toward me,” he says. “As I watched them browse, I heard heavy footsteps coming from the opposite direction. It was overcast. The light was low. And it was hard to see, but I could see glimpses of the deer and knew it was a buck.”

The deer slowly closed the distance, and Van Beck could tell that it was mature. He calmed himself down and readied for the shot. “The buck walked through an opening and I realized it wasn’t just a nice buck. It was him,” he says. “He walked within 10 yards of my tree. If I’d known it was him all that time, I wouldn’t have been able to calm myself down.”

The buck quartered away, and Van Beck drew his bow, but it was dead calm, and the buck heard it and mildly spooked. “He made a few bounds directly away from me and stopped at 40 yards,” Van Beck says. “I’d pre-ranged everything around me, so I knew the distance exactly.”

When the big buck looked back, he took the shot. Unfortunately his lighted nock failed, and he couldn’t see where the arrow impacted.

This is a tale of a true state-land giant that won’t soon be forgotten. (Leo Van Beck photo)

Van Beck packed his gear out and waited for help to arrive. At noon, quite an assemblage of family gathered to aid in — and enjoy — the tracking process. His father, brothers, uncles and a cousin — nine people total — headed into the woods. It was a bona-fide-backwoods, blood-trailing party, and the buck wasn’t far. “It was a red carpet,” Van Beck says. “We walked right to him.” The impact turned out to be a heart shot.

Taking turns dragging, with nine burly men, it still took two hours to get the buck out of the woods. “Everyone was just as excited as I was,” Van Beck says. “There was a sense of awe, putting my hands on that deer for the first time. I was speechless. This was a gift from God. Plus, my dad and uncles taught me to hunt, and they deserve credit for this deer, too.”

An official scorer put a tape to the deer and dispelled all the speculation about just how big it was. The deer gross green scored 214 4/8 inches. That’s a giant on any piece of land — public or private.

← Prev: One of Mother Nature's Most Beautiful Art Forms   A Deer antlers & its shed Next: The Late Season-Below The Dams →