The Late Season-Below The Dams 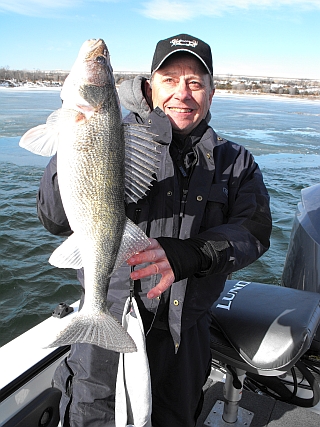 Team Outdoorsmen Productions member Larry Myhre, Sioux City, IA. with one of the walleyes he took by casting jigs up to and on the ice and then retrieving the jig through the open water back to the boat.

Before the water below the dams freezes and when weather temperatures are warmer, if you want to get into some excellent fishing, you best be ready as these mild temperatures won’t last long and soon winter will be on its way, bringing snow and the winter winds.

Once the heavy discharge that’s coming through the Missouri River dams is cut back, with things getting back to somewhat normal, the fish will move back up in close proximity to the dam, located in any current break below, with the largest concentrations of fish setting up below the gates.

Once this happens, you need to be on the water fishing for walleyes as they moved upriver preparing for the spawn and feeding in preparation for the long winter.

One question that’s always asked this time of year is where can I find the walleyes?

Once things return to some sort of normalcy, look for them in the same areas you found them this late fall, and perhaps a little deeper as they’re in that transition period where they soon move into their wintering areas.

Where they find baitfish or other nutrients is where they’ll be located, so look for them not far below the gates, on humps, just off drop offs and as it gets closer to freeze up, out into the deeper holes.

Another place we’ve found fish is under the ice below the gates, where you can pitch your bait onto the ice or just at its edge and then slowly work it back towards the boat with this method working well below the Dam at Fort Randal.

The preferred bait during the late season would be a jig, with a jig with a bigger hook working the best.

This time of the year, I use a much lighter jig, depending on how much current and the depth I’m fishing, I’ll start with 1/8th or ¼ ounce Northland Fireball jig for fishing shallower water with less current, when fishing deeper water or those locations with more current, a 1/4th ounce Northland Current Cutter jig does a great job.

Rigs like the Northland “Plain Hook” Roach Rig, with the Roach quick change sinker, allowing you to adjust the rigs weight quickly, works well during the late season as long as you have a larger hook at the end of your snell.

As I mentioned before, late season is when you’ll want to use a slower presentation, as the fish are moving about slowly searching for anything that will help them add to their fat reserve, helping them make it through the hard water season.

The key to taking walleyes this time of the year, especially those larger walleyes is to fish vertically, straight up and down and to have a lot of patients.

I generally start fishing with one smaller minnow, but there are times I like to experiment, bulking up my bait by doubling up on my smaller minnows, hooking one through the lips and the other through the tail as this gives your bait a little more action.

Since water temperatures are cold, most fish aren’t overly aggressive, so you might have to play with them a bit, giving the fish more time to take the bait and hook in.

If you’re fishing with jigs, when you detect the bite it’s a good idea to give the fish a little slack line, dropping back on your rod giving them time to draw the bait in.

Basically, what you’re doing is fishing a jig similar to the way you’d fish a live bait rig, allowing the walleye time to mouth the bait before sucking it in.

When feeling resistance on your line, simply reel up the slack, and feeling the added weight, then set the hook.

Many times, the fish will be holding onto the tail of the bait, especially the sauger and when you’re not fishing vertically, and any additional line you have out, makes it hard to set the bait properly.

Late season is also the time of the year when stinger hooks really shine; stingers like the Northland’s SNELLED STING’R HOOKS are made up of either monofilament or a light leader with a small hook or treble attached.

If you’re using a NORTHLAND FIREBALL JIG, you can attach the stinger to the Trailer Hitch at the base of the jig. If you’re not fishing a jig with a trailer hitch eye, they can be attached to the

the eye of the jig or the shank of the hook, with the hook inserted to the back of the minnow, stinger hooks allows you to hook those short striking fish that are just biting the tail of the your bait.

If you’re fishing in an area with a lot of snags, a single hook stinger is a good bet. In clean bottom areas, a stinger with a small treble hooks works very well.

When live bait rigs like the NORTHLAND ROACH RIG and others, you’ll want to feed line to the fish, allowing it to ingest the bait, generally a three count is plenty before setting the hook.

There are times, when the fish are schooled up with some aggressive and hungry fish where you may have to set the hook quickly as these fish are trying to get to the bait before other fish in the school get to it.

About the only things you can do is to try feeding them line at first and then, if you come up short, start setting the hook when you first detect the bite.

Another thing that we need to do to assure that there’ll be fish to catch down the road, especially with those larger females, is to release them back as they can’ produce fry, the fish for future generations and once they’re in your freezer, it’s over with.