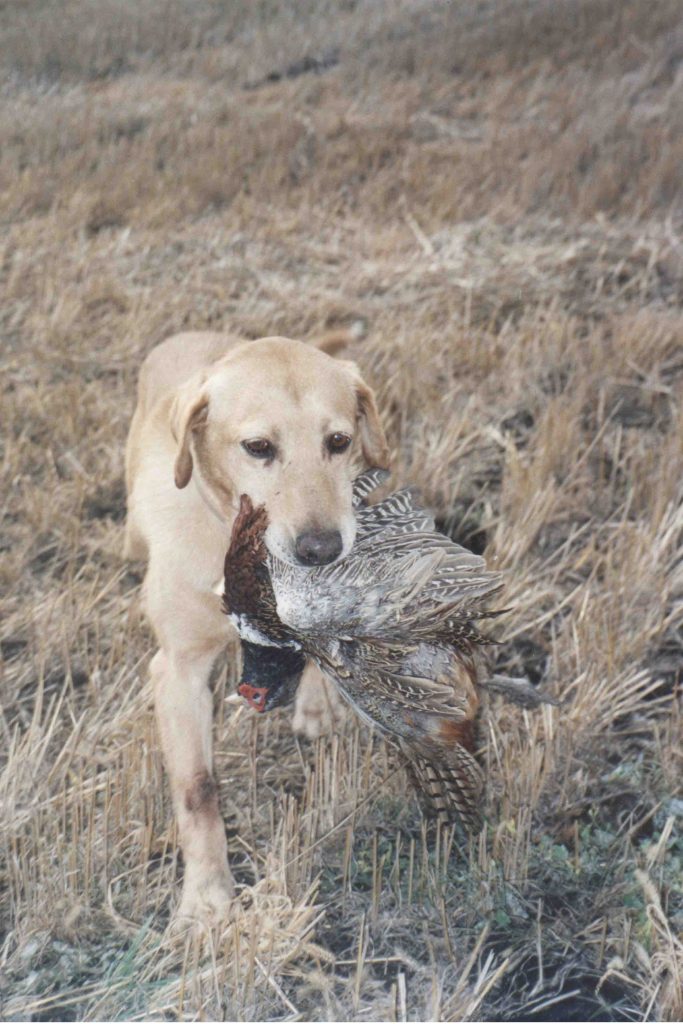 "Of the Outdoors" Columns | Uncategorized

Dogs are man’s best friend, especially if you’re a hunter, as Duke was to me, he had a good nose and let very few if any birds get away. (gary Howey Photo)

I’ve always had a dog, as a kid, a lab, just a plain old dog, that brought us kids a lot of enjoyment.

When I first moved from Watertown to northeast Nebraska, I had a second job at a game farm not far from town and after a couple of weeks, since I hadn’t been paid, I approached the owner asking when I’d received my check.

That’s when I learned that he didn’t have the money to pay me, but he up in the trees, imagine my wife’s reaction when I came home with a dog and a pickup, but no check, and after telling her about the great trade I’d made, it was very quiet around our house.

I named the dog Calico, and he became a member of the family, I worked him every day, teaching him to stop and look back at me, teaching him to return to my side, sit, heal and retrieve, we were good together.

I’ve hunted with others, some hunters want their dog to hunt just in front of them, always yelling for the dog to come back, spooking any birds.

On one field, my dog came out of the heavy cover heading for a small patch of grass, too small to hold a bird, he was on a mission, and wouldn’t come, so, I walked to where he was fooling around, just as I approached him, three roosters burst from the grass, unfortunately, I wasn’t ready because I thought I knew more than my dog, that this tiny spot was too small to hold birds.

That’s when the light came on, where I knew from that point on, I’d best follow my dog, no matter where he goes, picking up the scent, holding the birds tight.

Calico was a smaller dog, but didn’t let heavy cover deter him, he couldn’t cover a large area because the cover was so thick. Because of this, we hunted slowly, covering a lot of ground, and brought a lot of pheasants’ home.

The only problem I had with him, because of the thick cover, when he went on point, I had trouble locating him.

On one occasion, we were hunting 160 acres of thick CRP, so I had to drive through the field honking my horn, which flushed the bird, and call him back to me.

We solved this problem, using a beeper collar that beeped off and on when as he ran, when on point, the collar would emit a constant tone, where the hunters could zero in on him.

After Calico got older, I needed a different breed of dog, this was when I went to Kellogg Kennels near Madison, South Dakota.

Most Labradors are flushers, but at Kellogg’s, they trained their labs to be the best of both worlds, a pointer and a flusher.

My Lab, Duke, held until I wanted him to flush the bird, and when I said “flush them out.

From that point on, I fell in love with Labs they were a perfect match, easy to train and very effective at locating and retrieving birds.

If you’re looking for a hunting dog, that’s good with families, and kids, I’d highly recommend looking into going with a Lab, they have a lot of heart and can tackle the heaviest cover, they’re easy to train, easy to follow, as they’ll jump high out of the cover to see where the hunters are located, and stay close enough to cover most of the field, putting birds up within shotgun range.

Once you’ve hunted behind a good dog, you up the odd in your favor when it comes to locating and retrieving downed birds.

Now that my dogs gone, I don’t care to hunt without them as they make hunting much more enjoyable as well as productive.