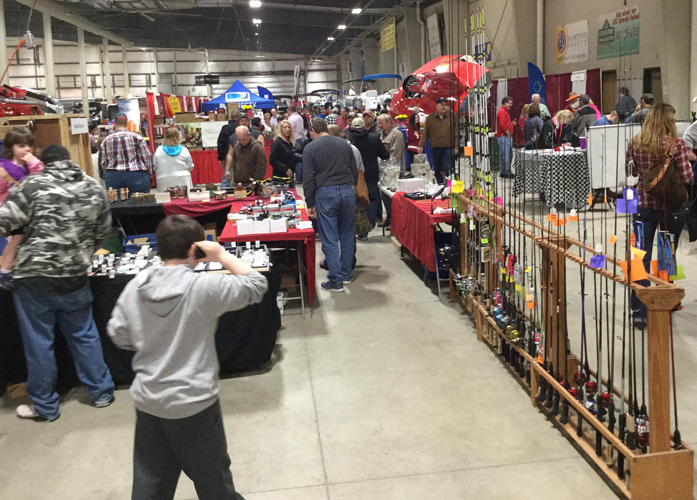 The Boat, Sports & Travel Shows held throughout the upper Midwest have everything an outdoor person is looking for, including boats, tackle, guides, hunting & fishing trips and a lot more. (Contributed Photo)

As 2021 draws to a close, many of us will make those New Year resolutions, some will get a good start on theirs, while other resolutions will fall to the wayside.

For those that carry through with their resolution, as one of our past presidents would say, “Bully for You.”

With so many things happening all at once during with the New Year, it’s easy to forget some things, for instance, believing you have your permits covered, it’s in your billfold.

It can be embarrassing, and it may be costly, when you first hit the water or ice, ready for the new year, when you believe you have the new permits, but when the friendly game warden checks you out, “dang” it’s the old permit and not the new one.

But for those out there that haven’t quite caught up with the latest technology, it’s easy to space off getting your up to date permits and licenses.

Right after your chat with the warden, you can purchase your 2022 permits by going to that state’s web sites, where you’ll be able to purchase a permit, as well as being informed on all other outdoor information., in Nebraska it’s http://outdoornebraska.gov/, at South Dakota’s G & P web site you can get your permit at https://gfp.sd.gov/, and the Minnesota’s DNR web sites at  https://www.dnr.state.mn.us/.

Beginning in January, the Gun, Boat Sport and Travel shows will be opening, no matter what part of the Midwest you reside in, there should be one of these events being held close by.

Beginning in January, with the Swiftel Center’s Gun Show in Brookings, S.D., as well the Yankton Field Archery Gun Show in Yankton, S.D., then in February, the Trophy Show, The Big One in the Convention Center in Sioux Falls, S.D., come February, it’s the Ramkota River Center event in Pierre, S.D. and in March, it’s the Codington County Ag Fair Grounds event in Watertown. More information on these Gun Shows is available at www.dtgca.org

The first of the South Dakota Outdoor shows, the Boat, RV, Camping and Outdoor show will be held in January at the Sioux Falls Convention Center, with the Greater Sioux Empire Sportsman’s show coming in March at W.H Lyons Fairgrounds.

Two of Nebraska Sport shows are to be held in January, with the first, the Nebraska Boat, Sport & Travel show held in Lincoln at the Lancaster Event Center with the Omaha International Sports and Travel show, going on at the CHI Health Center.

When you’re not ice fishing or attending these events, there’s no better time to get your fishing gear sorted, cleaned out and ready for the open water.

I have so many tackle bags, that I need to start on them in January and hoping to have that task done by the time the water opens up.

It seems like when I’m on the water, as I change baits until I find what the fish want, that the wet tackle I’m changing, ends up in a thrown in the tackle bag and if I don’t get it cleaned up and put away, there may be a rusty mess in the bag.

As I’ve  I’ve mentioned earlier that lines should be changed on your reels quite often, as the sun, temperature changes can knock the tar out of the best fishing lines.

That’s why I upgrade my lines at least once a year in order to not lose a fish, the biggest one ever, OK, anyway it would be a nice fish if I got in into the boat before’ my line gave way.

In the early part of the year, it’s the time I spend, checking out the new tackle and electronics and also when I purchase some.

My wife thinks I have too much fishing gear, while I feel that the angler who leaves this earth with the most stuff “Wins” and I just might be in the top ten.

Last year was a bummer, and I truly hope that 2022 will be better, where I can spend much of my time on the water and might see you out there.

Hopefully you had a very special Christmas and looking forward to a less stressful, healthy and happy New Year.

← Prev: The GAMEKEEPERS of Mosssy Oak GUIDELINES FOR MANAGING DOES BY: BOB HUMPHREY Next: Hi Mountain Seasoning-Sweet and Tangy Venison Roast →