The GAMEKEEPERS of Mosssy Oak GUIDELINES FOR MANAGING DOES BY: BOB HUMPHREY

By moving a certain number of antlerless deer from the population is an important component of a sound wildlife management plan. But which does should you remove and when is the best time to do it? 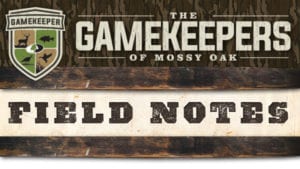 To a large extent, deer management is doe management. Females represent the breeding potential of the population so maintaining a healthy herd involves removing enough does to balance deer numbers with available habitat and nutrition, while leaving enough to ensure the population remains sustainable. Hunters often wonder which doe or does to take, how many and when to take them. Every situation is unique, and the answers depend on local circumstances and specific objectives. Still, there are some general guidelines.

If your herd is healthy and at or above objective levels, the short, somewhat tongue-in-cheek answer is: Take the first one that offers a decent shot. If seasons and bag limits allow it, biologists have already determined that your efforts to harvest a doe will not have long term negative effects. It then becomes more of a personal choice.

Perhaps your objective is putting meat in the freezer, gaining a little confidence and taking the pressure off so you can focus on a buck. Then, take a doe when and where you can. That might also be a good approach for youngsters, or adults new to hunting who need a little positive reinforcement and a sense of accomplishment for their efforts. Different hunters have different objectives, and some may be more conscientious of herd and population dynamics. Research has shown that mature does make better mothers. They produce more fawns and are more successful at raising them because they teach them where to find food and how to avoid danger. In the nuisance situation described above, removing that old nanny disrupted things enough to solve the problem. But if you want to sustain a reliable, harvestable surplus in your regular hunting haunts, you may want to pass on the older does and remove a yearling.

It’s also a good approach if your objective is slow, managed herd growth. You want to take out a few individuals, but leave behind the best, most productive individuals. Some hunting mortality is compensatory. Younger deer die at a higher rate anyway. You’re taking away those that might have fed a predator, and in so doing leave relatively more food for the deer that remain – one less mouth to feed.

Some hunters might recommend removing barren does because they’re using up nutrients but not contributing to the population. Research tells us something different. With few and rare exceptions, mature does will continue producing offspring until they die; and they can live a long time. Older doe without fawns in the fall probably had fawns in the spring but they may have succumbed to disease, predation or some other form of natural mortality.

When To Harvest Does

When to shoot a doe also depends on circumstances and objectives. If you want meat in the freezer and less urgency, get it done early. Reducing doe numbers before the rut might also lead to a more compact, intense rut, which is what most hunters prefer.

Removing does early also offers an energetic advantage to the herd. Bucks take up energy in the form of food. They expend a considerable amount seeking, chasing and breeding, effectively transferring some of that energy to the doe. Remove her after the rut and that energy is no longer available to the population; it’s lost. You get it in the form of venison but had you done so earlier, you’d be removing less energy from the equation. In the grand scheme of things it’s trivial, but still worth considering, especially in areas with low deer numbers.

Yet another reason for filling that doe tag early is your chances for success. With each passing day of the hunting season there are fewer deer out there, and they’re learning how to avoid hunters. Hold that doe tag until season’s end while you hunt for a buck and you’re more likely to end up eating tag soup.

How many does to shoot basically boils down to what the regulations allow and what your personal objectives are. If seasons, bag limits or local management plans allow it, there shouldn’t be a problem. In fact, most landowners operating under management plans often fail to meet doe harvest objectives. That’s partly out of fear of over-harvest. It’s also because the does get harder to hunt.

If you’re hunting on private, managed land take all you want and can. If you’re on public land you might want to be a little more conservative. Take what you need and leave the rest for other hunters who may not have the time, means or skills to be as proficient and successful.

Bob Humphrey is a certified wildlife biologist and registered Maine guide who has worked with and hunted deer across North America. See more of his writings at www.bobhumphrey.com.

← Prev: Merry Christmas & a Happy and Healthy New Year From gary Howey Next: A new year 2022   By gary Howey →