You Made the Shot, What to do Now? By gary Howey 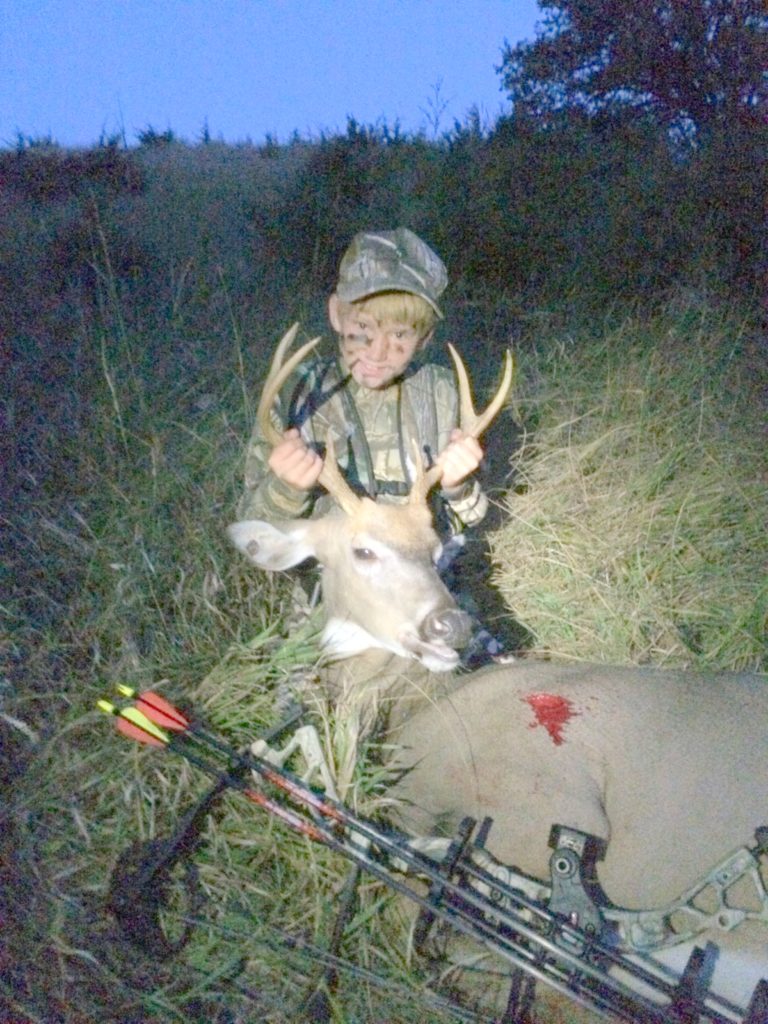 Cazden Christensen, Hartington NE. with a nice buck he took a few years back with his bow. (Photo By Bill Christensen)

You know you’ve done everything you could to make this hunt a success, gotten out scouting cameras, have a good idea as to where the deer are coming and going, you have on scent proof clothing, used a no scent spray, tested the wind to see what stand would work best under these condition,  into your stand at O’ Dark Thirty long before the sun makes its appearance, waiting for that big buck you had on your game cameras and thought of nothing else since you saw those pictures.

Things happen quickly when hunting and as you look around, it happens it happen as the buck you’ve been dreaming about steps into the open, less than a hundred yards out, you slowly pull back, center you sight crosshairs on the buck’s chest.

The arrow impacted right where you had your crosshairs It jumps up, and heads for the thick cover.

Now what, if you’re unable to locate the buck, and if it gets away, you’ll be looking at the worst nightmare for a hunter, wounding an animal and you weren’t able to locate it.

Below are several tips to help you find the buck.

1. You’re going to the location where the deer was before releasing your arrow, pick out some sort of reference point in order to know where the buck was when your arrow impacted.

2. Whenever hunting deer, it’s important that you wait up to an hour, depending on the time of day before pursuing the deer as this give the deer the opportunity to lie down and stiffen up, before descending from your stand, relax, take several deep breaths while watching where the deer went. If you pursue it too quickly, you may jump the bedded buck and he’ll get up and run farther into the woods.

3. Once down, keep an eye on the deer and be sure to have an arrow knocked just in case he gets up as you’re approaching.

4. You’ll need to pay attention to the animal and note if it has a limp, or broken leg or its tail, as a deer that’ not hurt runs with its tail up, where one that’s hurt has its tail down tight to its body.

5. Once you climb down, go straight to where the deer was standing when you fired the shot. check that area over closely for any sign; blood, hair and pieces of bone. You’ll want to be careful. so, you don’t accidently step on the sign.

6. When I’m, hunting, I always carry a roll of Hunter’s Orange tape, which I use to mark any sign that I find and if you lose the blood trail, I can go back to where I marked a spot where I found blood and work from there.

7. Don’t walk right on the trail, walk off to the side as you might destroy some of the sign along the trail.

9. Blood that is pink with bubbles comes from a lung shot, while bright red blood indicates a heart or other area with numerous blood vessels.

10.  Wounded deer generally go downhill as it’s easier for them.

11. Upon bumping a wounded deer, you’ll need to back away, allowing the deer to move a short distance and lie back down.

12. Hitting a deer in the chest that don’t die immediately, generally feel week and don’t move far, and can be recovered within fifty to one-hundred yards.

13. Once you run out of sign, it’s a good idea to begin circling the area, looking for fresh sign.

14. Don’t get in too big of a hurry, take your time as this allows you to look more closely at the ground.

15. Leaves which are disturbed will give you a good idea as to the direction it’s going

16. When you can no longer located sign, or if it gets too dark to see anything, it’s not a bad idea to wait for morning and have a couple of friends along to help you look.

17.  Once you’ve located the deer, pay close attention to their eyes, if they’re open, there dead, and if their eyes are closed, they aren’t dead, so put another arrow in it to finish the job.

18. When you find your deer, if its eyes are open it is dead. If the eye is closed, then shoot it again, do not wait or you will be sorry.

← Prev: Late summer basin’ means getting into the slop and rooting with the hogs By Larry Myhre Next: THE GAMEKEEPERS OF MOSSY OAK-6 Truths about Whitetail Rubs By Todd Amenrud →