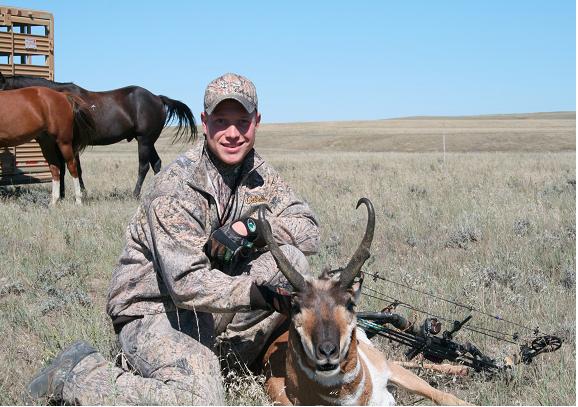 The seasons that archers in South Dakota and Nebraska have been waiting for have finally arrived, the archery Season is here or will open shortly.

The South Dakota archery antelope season opened up on August 15th and will remain open through October 2nd.

According to the South Dakota Game, Fish & Parks, “Pronghorn, commonly referred to as antelope, populations in South Dakota persist at lower numbers than were historically present.

Pronghorn densities are greatest in the western rangelands of the state but herds exist in most counties west of the Missouri river and some counties directly east of the river.

Important habitat features include rolling terrain that allows good visibility and a mixture of grass, forb and shrub forage plants.

primarily on the arid short grass prairies of the western United States, with South Dakota hosting one of the highest populations of antelope in the nation, ranging across the west and central regions.

Antelope rely on their peripheral vision, the safety of the herds, and the ability to reach speeds of nearly 60 miles per hour to detect and elude predator’s, which include coyotes, bobcats, and golden eagles.

Their long white rump hair is erected when the animal is frightened, serving as a warning “flash” to others. They are a curious animal and often running to a nearby ridge and pause to look back.”

Pre-season scouting is important, no matter what species of wildlife you’re pursuing and finding out what water holes are being used by the antelope will give you an advantage, allowing the hunter to place their blinds near these watering locations, well before the season opener.

The South Dakota archery deer season, originated in the 1900’s, and wasn’t open to hunting until the 1950s, allowing deer populations to recover from historic lows.

White-tailed and mule deer are the most highly sought-after big game species in South Dakota and throughout North America.

Hunting remains the number one tool for managing deer populations across South Dakota and harvest strategies are intended to ensure the well-being of the species and its habitat while maintaining populations at levels compatible with human activity and land use.”

Their archery deer season opened on September 1st, and will stay open until January 1ST 2021.

The earlier opening may give some hunters an opportunity to take a buck still in velvet, as the first part of September, is about when most bucks have or finish up removing the velvet from their racks, but there may be some bucks still retaining their velvet. 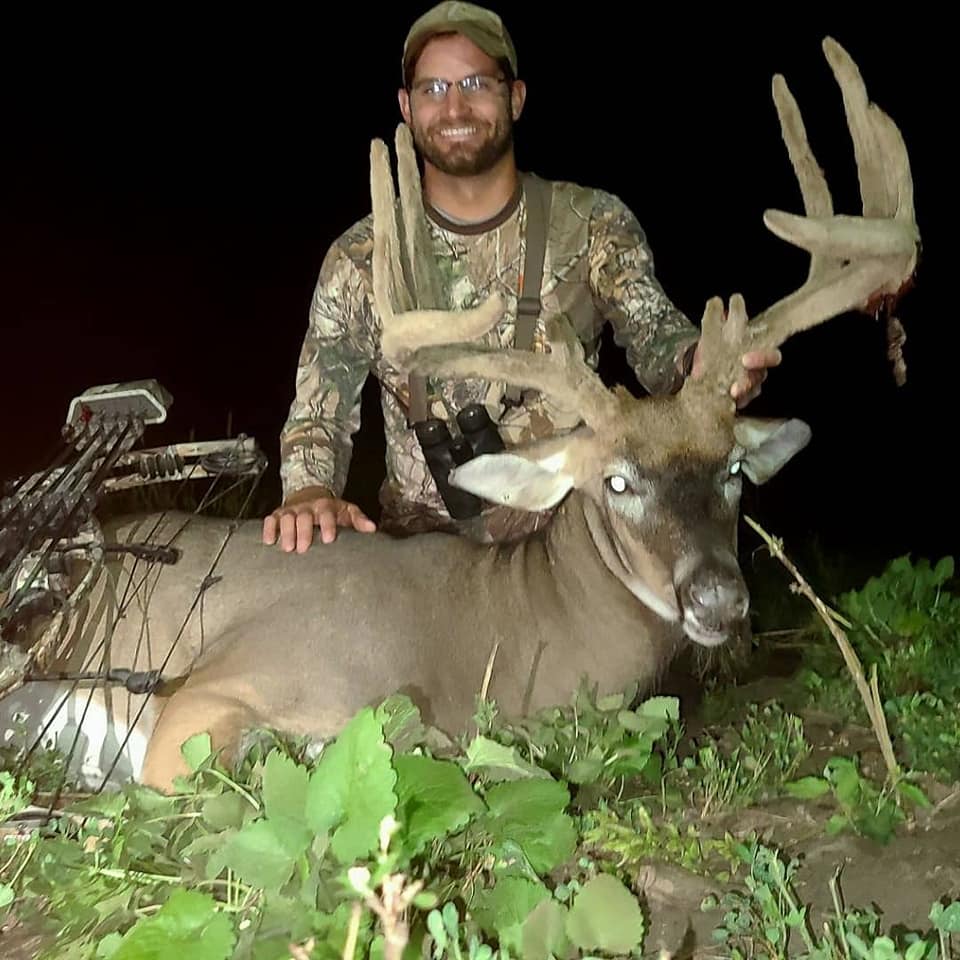 Archer, Ty Gowery, Wynot, Nebraska had been after a certain buck for several years and during the early part of the Nebraska season tagged a beautiful buck that was still in velvet.

Tree stands and deer houses placed before season in areas where heavy deer trails coverage, with the hunters using the wind in their favor and if things work out the way they were planned, they’ll have an opportunity for a shot as the deer make their way from their bedding areas to where they feed.

I had a friend that did some work using deer decoys, both the foam bedded doe as well as the full body buck decoy which he put out just prior to the rut so he could see which decoy received the most attention.

The bedded doe decoy received the most of the attention, with several smaller bucks using their rack to try and get the decoy to stand, and when they flipped it over, they moved up on it, but left after several attempts to mount it.

The buck decoy got some attention, but from affair, as the bucks that came out of the corn gave the decoy a second look, but then retreated back into the corn.

In Nebraska, its archery antelope season opened on August 26th with archers having the opportunity to hunt these sharp-eyed, fleet footed animals through the end of December.

Those hunting near water, should have a good chance for shooting opportunities because of the extreme heat as the bucks will make more trips for water.

Bucks are very territorial and will face off against other bucks making moves toward their harem, because of this antelope decoys work very well, allowing the archer to hide behind the decoy and slowly approach the bucks.

I’ve hunted antelope with my bow, using my Montana Decoy, was able to make a stealthy approach on a buck, with the buck becoming aggressive as it approached me, unfortunately, I under estimated the distance and shot under the antelope.

A few years back, I lined up a South Dakota archery antelope hunt with Crooked Creek Outfitters, Camp Crook, South Dakota for Jared Wire, one of our Team Outdoorsmen Productions members.

The method they used was quite ingenious, hunting in the same grasslands where horses and the antelope had fed, and since the antelope were used to being around the horses, Jared and his guide used the horses to get within bow range.

The guide used two horses, with the guide walking beside the front horse while Jared walked beside the back horse as they made their way towards the buck.

Once they got within bow range, Jared squatted down beside the horse, drew his bow as the guide walked the horses ahead, giving him a good shot at the antelope which had no idea he was there.

The Nebraska archery season deer season, open throughout the state, opened September 1st running through the end of December.

I’ve taken a few deer with my bow, but the method that our late friend Otis “Toad” Smith developed very seldom missed, allowing him to take some excellent bucks.

He hunted the corn fields, especially those that had begun to dry, on windy days, with the wind in the right direction, in his face.

He’d scouted ahead of season and had the well-used deer trails leading into the corn figured out, at the beginning of the season, he’d as quietly as possible, enter the field, going in a row at a time, looking down at each row, looking for the bedded deer and seeing no ear or any other part of the deer, continued to move slowly through the corn.

Once he came across a trail leading off into the corn rows, he used his binoculars to see if the deer were bedded in that row, once he located a deer, he’d move back a couple of rows, enter that row, while slowly working his way up behind the deer, which gave him a clean shot at the deer.

As with any type of wild game hunting, your pre-season scouting, which you should do a lot of, is very important as things can change very quickly in the outdoors.

During the pre-season, the corn fields may still be standing, but as they dry up, by the time the season opens, they may have been chopped or combined, eliminating your corn hunts.

The mast production, “acorns” that were all over the ground last season, may not be as good this year and because of the weather, found to be simply, just a poor year for acorns.

Another thing I’ve learned when it comes to mast production, deer will prefer the acorns from a white  oak over red oak, as the white acorn has less acid and a sweeter taste and the white oaks are the first to drop their acorns, at times as early as August,  while the red oak hold onto its acorn longer, and once the white oak acorns are gone, the deer will eat the reds if times are tough.

Once your deer is down, body cavity cleaned, tagged and cut up, when it’s prepared properly makes for some for excellent and healthy eating, but what does a hunter do that has more venison than he needs?

There are deer hunters out there that acquire numerous deer permits, those with deer depredation problems and others attempting to manage their buck to doe ratio, ending up with more meat than they can use,  when this occurs, they can donate their deer to programs where the deer are processed at no charge to the hunter and then, the venison is donated to needy families.

In Nebraska, there’s the Nebraska’s Hunters Helping the Hungry program, where deer can be donated, with the deer processed with the venison furnished to those who could use it.

If you’d like more information or interested in donating a deer in Nebraska, you can go to: http://outdoornebraska.gov/hhhfaq/

In South Dakota they have a similar program called Sportsman Against Hunger and more information is available on this program at http://feedtheneedsd.com/

In conclusion, if you do your pre-season scouting, know the lay of the land, use the wind in your favor and have done enough practicing with your bow and your rifle, this should be a good deer season for us all.

Ty Gowery, Wynot, Nebraska with the five by five buck he’s been hunting for several years and on the opening day of the Nebraska archery season he tagged the buck which was till in velvet.