Best fishing of year is right now By Larry Myhre

We are currently on the threshold of the best fishing of the year.

I love the fall months, September, October, November. No, I could care less about the football season, even hunting plays second fiddle. Fishing is where it is at for me, and the catching just gets better right up until the lakes freeze over and the mighty Missouri begins running ice.

It never ceases to amaze me how popular fishing has become and how much money the average angler throws into his sport in the purchase of boats, electronics, tow vehicles and gear. Yet come September, only the die-hard anglers remain on the water.

That’s another reason why I like fall fishing. It can get lonely out there. And that’s just the way I like it. And so, too, do trophy walleyes and bass.

Launch off any of the most popular boat ramps on the Missouri River reservoirs in the middle of any week all summer long and you have to ask yourself, “Doesn’t anybody work any more?”

On the popular walleye spots you can count 20 to 30 boats in view at any time. And don’t even think of the weekends.

But from now until freeze up you’ll find plenty of room to park your trailer.

Females of all game species begin developing eggs in the fall. They instinctively know they must eat a lot to store fat to see them through the less active periods of cold water. So, they are willing to bite your lures. 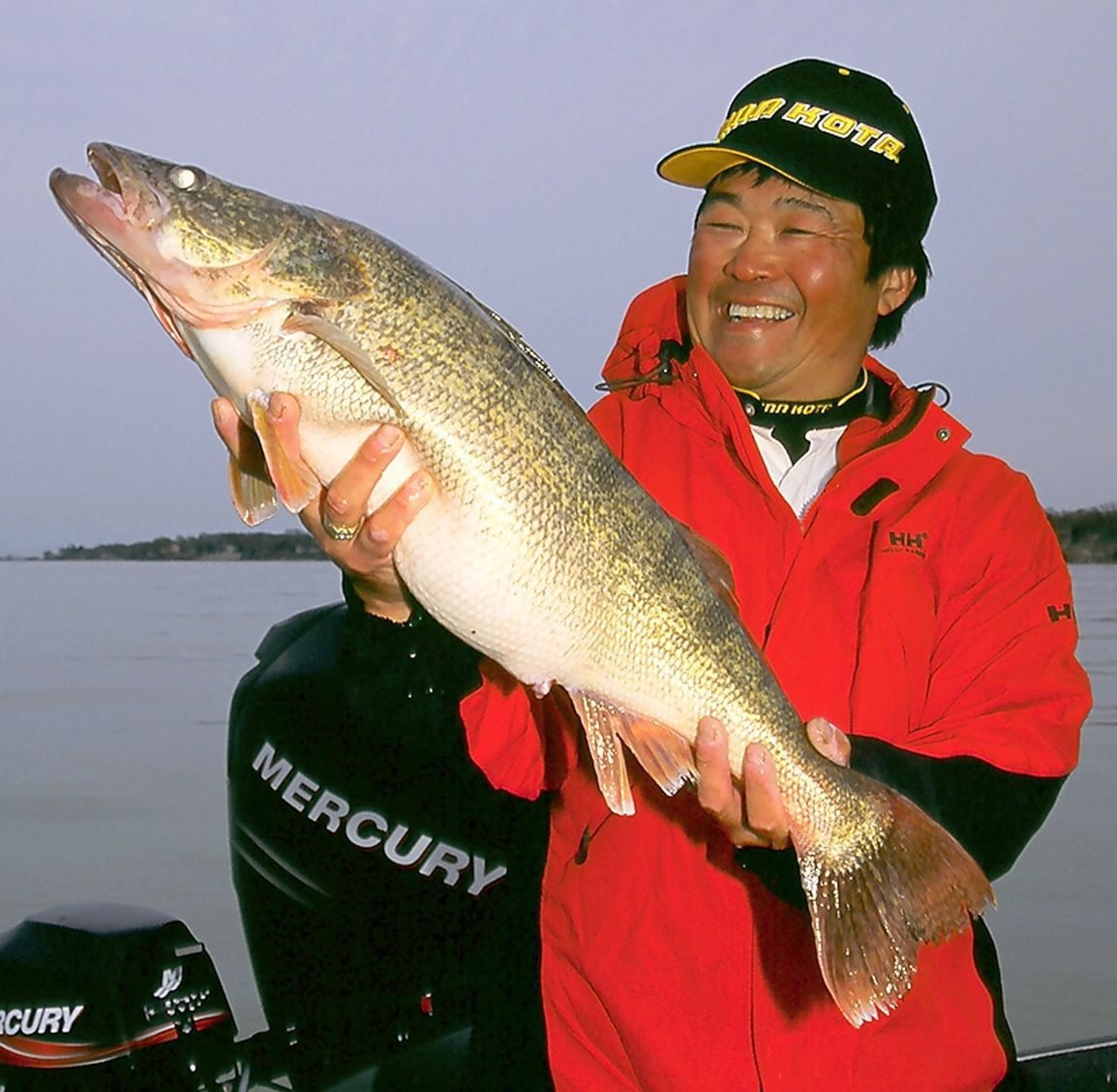 Predators like walleyes, pike, smallmouth and largemouth bass begin feeding on larger prey fish. That is because much of their forage has grown all summer long and are now in that five to seven inch or larger size range, depending on the species.

Over the years, anglers have devised a dizzying number of presentation techniques to take fall fish. But, let’s briefly review some tried and true fall techniques for walleyes, smallmouth and panfish such as perch and bluegills.

For walleyes in natural lakes such as West Lake Okoboji and most of the larger Minnesota glacial lakes, it is hard to beat a creek chub or red tail chub trolled on a live bait rig on deeper rock piles, main lake points or rocky shorelines dropping quickly into deeper water. When picking spots to fish you will do well to fish the side of the structure that drops quickly into the basin of the lake.

Walleyes are notorious for going very deep in the fall in glacial lakes. They may be 30, 40 or more feet on rocky or hard bottom areas. That means a fish pulled out of water that deep will probably not survive. Their air bladders will protrude through their throat and into their mouth. That’s a dead fish. For that reason most anglers don’t go after those deep fish. I once pulled a walleye out of deep water that was dead before we netted him. I don’t fish deep walleyes anymore.

There will be others in more shallow water that can be caught and released. Best fishing for shallow walleyes will be early in the morning and late in the evening.

Shorecasting at night by wading anglers really comes into its own in the fall. Wading anglers look for current. It could be a stream emptying into the lake or a necked down area of the lake or any number of other conditions that could cause current, including the wind.

The best lures will be large, minnow shaped, shallow diving, suspending lures such as the Rapala Husky Jerk.

On the Missouri River reservoirs good fishing will be had in the tailraces of the dams or behind sandbars as much as 10 miles below them. Larger bays will also hold fish on deep, rocky points, if you can get by the smallmouth bass.

Just remember this about fall fishing for any of the game species. The colder the water gets, the slower your presentations should be. And when temperatures dip into the low 40s, you might want to forsake the chubs and larger presentation and go back to minnows or smaller artificials.

Once water temperatures drop into the 40s, I begin to look for smallmouth on deeper rock piles or hard bottom areas such as submerged roadbeds near deeper water. On the Missouri reservoirs the smallmouth will set up on deep rocky points. If you like to catch smallmouth, you owe it to yourself to head for Lake Oahe and fish the points in the Cheyenne River anytime during September. Jig and minnow or bottom bouncers pulling minnows or chubs are two of the most common methods. The action is nonstop. And the Cheyenne is not the only place. Any of the major points in big bays or even the main lake will hold a ton of smallmouth. And they will be big, three and four pounds.

On natural lakes I like to fish a five-inch creek chub on a 30-inch snell behind a Lindy No-Snagg sinker.

Perch gang up in big schools in the fall and feed ravenously. In lakes like Big Spirit at the Iowa Great Lakes and West Lake Okoboji they will feed heavily on young of the year bluegills. We used to call them “flats.”

The outside edges of green weeds are perch magnets, mostly because that’s where they find the bluegills. Sixteenth ounce jigs tipped with waxworms or wrigglers or jigging spoons such as the Oh Shucks Jigger Minnow work well.

Big bluegills will set up on the deepwater side of still-green weedbeds in lakes such as West Okoboji, which currently has a fine bluegill population. Slowly move along the weedline with the electric motor pulling a 1/16-ounce jig tipped with wrigglers until you catch a ‘gill. Then anchor and fish slip bobbers with a 1/32-ounce jig tipped with wrigglers. You should catch plenty of them this time of year.

As fall wears down into winter, the fishing will slow down. But, it seems like the fish you catch right before freeze-up will be real lunkers. That’s enough to keep me out there. What about you?