As we pulled into the parking lot on Tuesday, the second day of our fishing trip on Lake Francis Case, there were sixteen rigs inline waiting to launch their boats, my first thoughts were, Wow doesn’t anyone work anymore!”

When the bite is on, news travels fast and the bite was definitely on with boats launching out of Platte Creek in the Dock 44 area.

As I mentioned in the beginning of this column, it was our second day on the water, where we’d be filming with professional angler and Freshwater Fishing Hall of Fame inductee, Ted Takasaki, Sioux Falls, S.D.
Larry Myhre, Sioux City, IA., camera operator Bill, Miller, Elgin, NE.  and I had driven up on Monday in heavy wind and intermittent rain showers, and it looked like the bite would surely be off because of the front coming through and we’d have to pound the water late into the first day to find some fish.

Ted, who arrived mid afternoon had waited out the storms, which took roofs off several buildings in Armour, S.D. and dropped hail east of Sioux Falls. He’s been busy as he just returned from fishing the National Walleye Tour on Lake Sakakawea where he finished in 5th Place.

We launched Ted’s Lund 219 Pro V mid afternoon, heading out of the bay, expecting to having to fight the wind, when it  calmed down, making for a perfect walleye chop and a nice smooth ride to where we would be fishing.

This was the first day of our two-day trip and with all the fronts that had gone through, I didn’t know what to expect as cold fronts generally shut the fish off.

When we arrived at the first spot we’d planned to fish, we were greeted by several boats working the point, with the majority of them pulling plugs.

Because we were filming, which seems to attract a crowd, Ted maneuvered the boat to an area that was less crowded?

On this trip, we’d be using bottom bouncers and spinners. Ted uses the Smile spinner blade Slow Death rigs, which proved to be deadly on walleye. The Slow Death hook is off set causing the bait to spin with a corkscrew action with the blade’s extra wiggle gives off more vibration. If you’re using the rig with crawlers, you want to insert the barb of the hook as close to the top of the crawlers head and thread it up past the hooks eye, the pinch off all bur 5 or 6″ of the worm. The vibration from the blade and the action of the hook along with the scent being dispersed from the crawler seemed to draw fish to the bait. 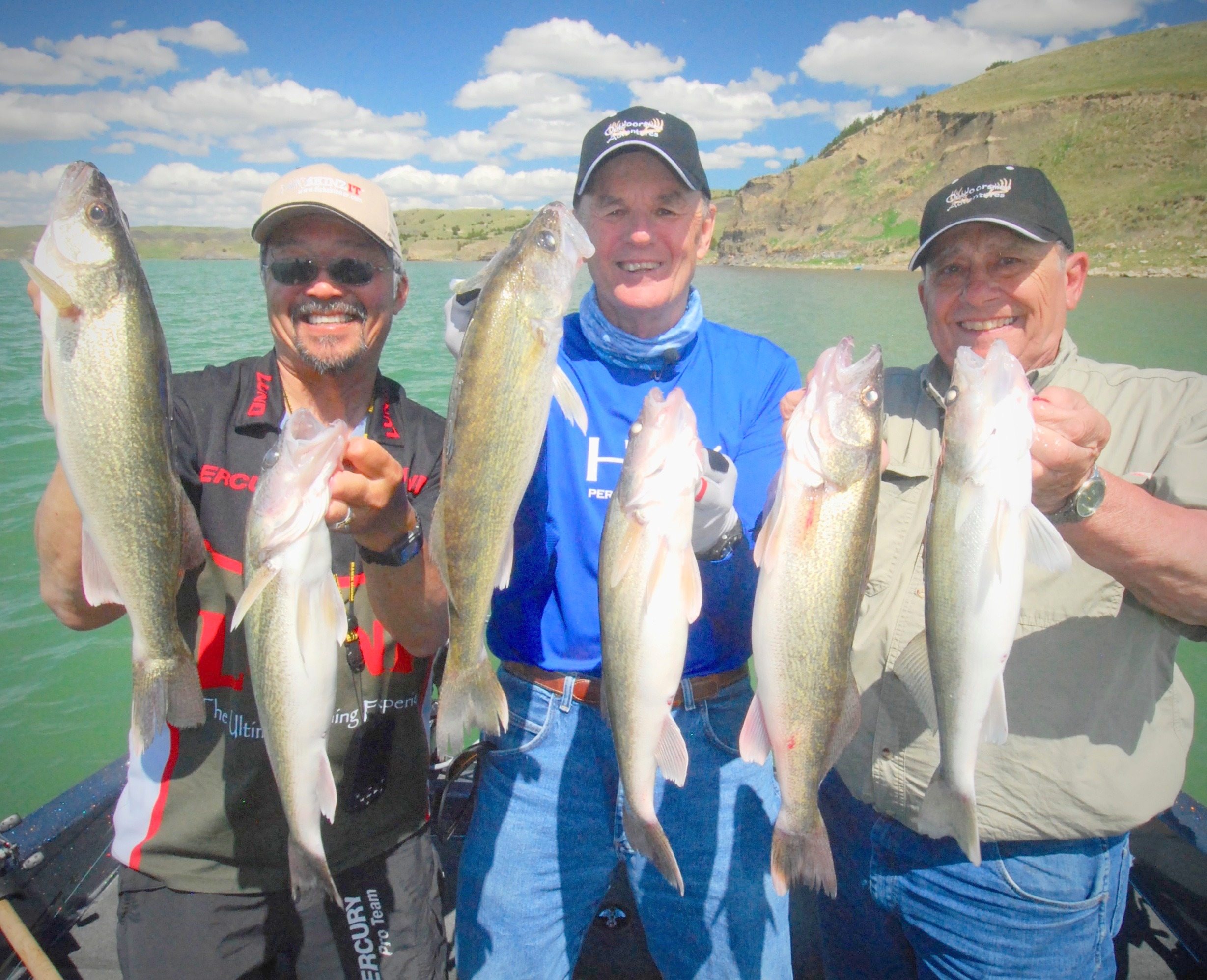 We’d be fishing this rig slowly behind bottom bouncers, trolling from .9 to 1 MPH in 5′ to 12′ foot of water and the ability to allow us to troll this rig slowly. By varying the speed, it gave us the opportunity to see what speed our rigs worked and the speed the walleyes were more apt to bite

Upon arrival, we’d try different baits; crawlers and minnows, searching for the walleyes to find out which bait they were more apt to take.

Our early bite came on minnows, but as the day progressed, it changed to a crawler bite and we rigged all but two of our rods to crawlers.

The wind from the morning had created mud lines on the points we were fishing and Ted took advantage of those. Mud lines are created as the wind pounds into the shoreline, dirt from the shore is washed back into the water, suspending on the upper portion of the water. This allows the light sensitive walleyes to move up from deep water in under the mudline, as water below the mud line is clearer which allow the walleye to feed shallow during the day.

Watching his Humminbird graph closely Ted followed the contour lines and as we passed the point, he swung closer into 5′ foot and that’s where our first fish came from, a healthy 17′ fish.

As the day progressed, Ted kept the boat between 10′ and twelve foot while he and Larry cast minnow tipped jigs up into the shallower water along the shore, as if there was one fish shallow there had to be more.

We ended our three and half hour day with 10 walleye ranging from 17″ to 20 ½”, not a bad day no matter where you would be fishing.

That evening, another front came through the area with an inch of rain, with more predicted for the following day.

On our second day, we would be greeted by heavier winds and waves than we had on day one. Once we arrived at the spot we planned on fishing, there were several boats fishing it, so we’d have to go approximately 20 miles upriver to get away from boat congestion.

We’d heard that the larger fish were coming trolling crankbaits, so we rigged up several reels with braided line with crankbaits moving the boat little faster than on day one, trolling from 1.7 to 2 MPH.  Trolling crankbaits is a great way to catch fish, but the wait until one hits is like watching paint dry as it may take quite awhile or it may happen quickly. Once you get a bite, everything happens fast as some of the other lined have to be brought into the boat to keep the fish from becoming tangled in the other lines.

After trolling for over an hour and bringing in only one walleye, a small white bass and a drum, we concluded that today in the area we were fishing it wasn’t a crankbait bite.

As we did the day before, we put down our bottom bouncer Smile spinner blade Slow Death rigs. Using crawlers on these rigs, we quickly put 6 fish in the boat, all over 16 ½” before we picked up and moved up river to another point.
The bite didn’t start as quickly as it had on the first point; our first fish were “short” under the 15′ size limit and were returned to the water.  As it had on the previous day, once the bite started in one area, Ted would turn the boat, using his Humminbird, back track along that same line where the fish were caught. After we took a few fish, the bite slowed and we’d move a couple of times until we were back on fish.

Lake Francis Case is a popular lake and it continues to amaze me, it’s a scenic body of water producing fish year in and year out

We were on the lake Monday and Tuesday and there were pickups in the parking lot from Nebraska, Minnesota, Iowa and South Dakota.  I can only imagine how many boats would be on the lake on the weekend.

Lake Francis Case is 107 miles long and is a 102,000 body of water, where the bite is on with most anglers going after walleyes. Another hard fighting fish on Francis Case is the smallmouth bass whose population in the lake has exploded, giving anglers another fishing opportunity.

Our plan is to come back in the fall and fish the lake again, maybe without the camera, just for fun, as it’s the place to be if you want to do some fishing.