Cats on the River By Gary Howey 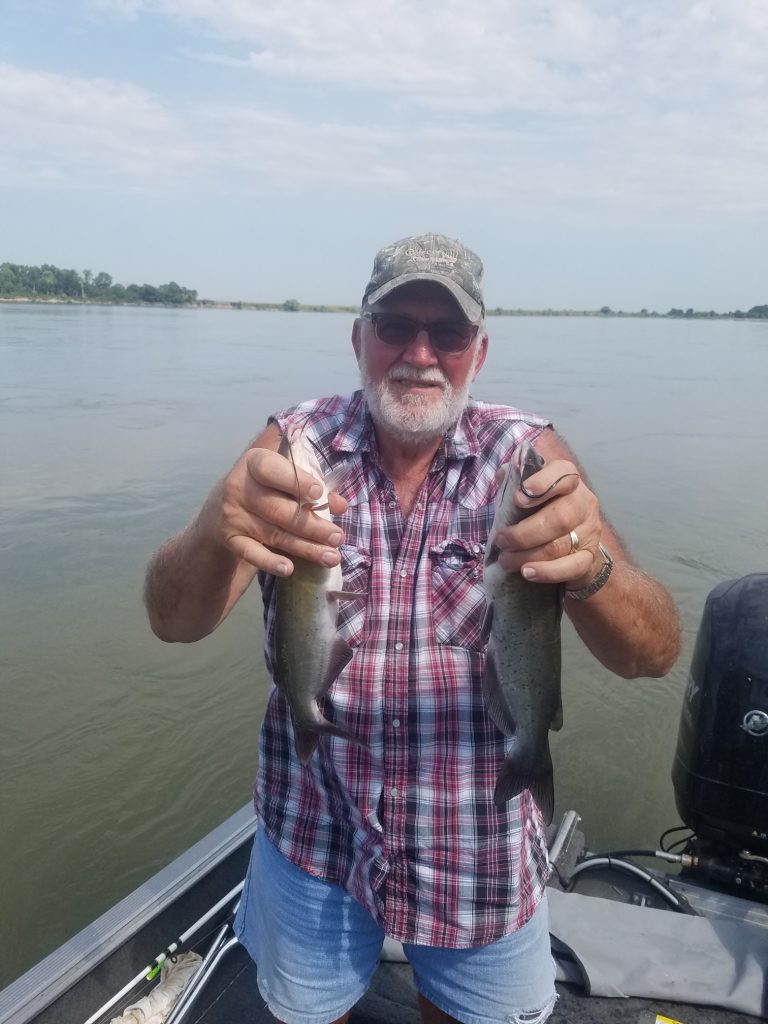 The catfish didn’t mess around, hitting the bait hard, as Larry Starman, Wynot, Nebraska picked up his rod, setting the hook, with rod bending over, indicating a good fish.

The fish stayed down, immediately headed into one of the snags we were fishing. Didn’t take long before the fish was hung up in the snag, Larry kept pressure on the line and could still feel the fish move in the snag.

He couldn’t pull the fish out of the snag, his only option, to release line, hoping that the fish, feeling no pressure would swim out of the snag into open water.

It didn’t take long before the fish, moved out from the snag, allowing Larry to land another nice Missouri River catfish.

We were fishing catfish on the Missouri River, catfish are the most underutilized of the fish species, not sure why, perhaps it’s the bait you use to catch them.

They are a great fighting fish, found in almost all bodies of water and as far as eating goes are hard to beat.

We had launched at the Brooky Bottom dock, heading for several of the holes where Larry and his wife Bonnie had taken catfish earlier.

We were using stink bait, and as I packed the bait into my worm with a stick, my eyes would start to water as we were using, Sonny’s Stink bait.
As far as stink baits go this smelly, concoction had never failed us with Larry purchasing the bait by the gallon.

Both Larry and I were using stink bait rigs and there are many variations of these rigs, some using sponges, bait tied up in a nylon type material with a treble hook on the receiving end and what we were using, colored tubes.

Our baits were constructed of a soft plastic tube, open on both ends, allowing us to pack the stink bait inside them with holes along both sides, allowing the bait to stay on the hook and gradually disperse this killer bait downstream.

It’s tough to cast out this stinky gooey bait without depositing some of it on the boat or yourself, so when using stink baits, you’ll want to bring along some rags to clean up after yourself.

One thing when fishing stink baits, don’t give up to quickly as it may take the fish awhile to move to your bait and if you get too anxious, you may be pulling your bait in just as the fish zeroes in on it.

As far as bait color didn’t seem to matter, as the eyes of a catfish are poor, but their sense of smell is outstanding, as they have taste receptors inside and outside of their mouth as well as on the barbell’s allowing them to locate a potential meal.

Channel catfish aren’t too particular when it comes to what they eat, unlike the yellow, Flathead and Blue catfish that prefer live bait, channels can be caught on any number of baits including cut bait, worms, shrimp, Ivory soap and other nasty smelling baits.

Like all fish, they don’t care to waste energy, fighting the current and generally are located out of the current not in the main channel, you’ll also find them in deeper holes, adjacent to downed trees, deadheads and other trash.

Before you give up on reading this column, yes, it’s known that some of the best catfishing is found in the fast water coming out of the turbines at the dam. Those catfish, just like all fish, lie up behind the rocks and other debris on the bottom out of the main current, waiting for lunch to come by.

We were fishing along the Nebraska shoreline in the slack water pockets just off the current, not far below a snag; catfish like to take refuge in deep holes, especially those with snags, coming out throughout the day and night to feed.

Both Larry and I favor stink bait, but I’ve been in boats with one of our friends who refuses to use it, preferring cut bait as he indicated that “he wasn’t that hungry, having to resort to use the smelly stuff.”

The first spot we hit, a good one, gave up eight nice size channel cats as well as a few releasers, not big enough to keep, as the bite slowed, Larry fired up his big motor, and move the Lund to the next spot.

We had eight fish in the live well, needing a dozen for us to head home with our limits and each time we moved, we picked up, one or two nice fish as the cats couldn’t resist the stink bait.

Casting out to the edge of the current, our rigs tumbled into the slower moving water just below the trees and other debris that had washed up along the shoreline.

At times, Larry would maneuver the boat into an area that appeared to have no snags, just a deeper hole off the main current.

Even though the hole seemed barren, it wasn’t long before both of our rods indicated a bite; setting the hook, we quickly found out that there were some unseen snags out in front of us.

Once the fish moved into the snag, no amount of pressure was going to dislodge it, I could still feel the fish, and tried feeding it line, hoping it would swim out, yet it refused, stayed in the snag and eventually pulled free.

Of course, we figured those catfish we lost in the snags had to be a big one, no, we hadn’t seen it, but anyways, that was our story and we were sticking to it.

Each hole produced some fish, some good eaters while others needed to grow a bit. Before I released several of the smaller fish, I looked them square in the eye and said, “now go tell your Mother a nice guy let you go and ask her to come over and thank me”, It was worth a try, but it didn’t work!

The bite begin to slow, so I decided to try a nightcrawler, it sat out there and soaked up and while I messed with it, Larry landed another nice fish.

To get back in the action, there was only one thing to do, hold my breath, drop a stink bait rig into the five-gallon bucket and get back to the business of catching catfish.

We were on the water about four and a half hours, not getting much time to set back and relax as one or both of our rods were always indicating a bite, but who needs to relax when the fish were biting.

It was a GREAT day; I had the opportunity to enjoy a beautiful day, get out on the river, to spend some time fishing with a friend, and headed home with a limit of nice catfish fillets.

Gary Howey, originally from Watertown, S.D., now residing in Hartington, Neb. is a former tournament angler, fishing & hunting guide, an award winning writer, producer, photographer and broadcaster, a recent inductee into the “National Freshwater Fishing Hall of Fame” in 2017. Howey is also the Producer-Co-Host of the Outdoorsmen Adventures television series and Outdoor Adventures radio. If you are looking for more outdoor information, check out garyhoweysoutdoors.com, outdoorsmenadventures.com and like Gary Howey’s Facebook or watch his shows on www.MyOutdoorTV.com.

← Prev: Clark, S.D. Hosts 12th Deer Hunt for Disabled Youth Next: When it comes to Hunting Hunt the Edge By Gary Howey →