The dying rabbit screams were echoing off the hills on the other side of the valley. It was colder than a well digger’s heart and I was beginning to think this stand was going down as another exercise in futility.

Then I heard the drumming sound of galloping feet behind and to my right. I looked over my shoulder right into the yellow eyes of a coyote, sitting down and staring at me from about 12 feet away. Behind, another was charging in, his paws thumping the frozen ground so hard it sounded like a horse.

It was all over in about three seconds. I had two empty .243 shells on the ground and nothing to show for it but footprints in the snow.

And that’s how it is, sometimes, when calling coyotes. They don’t always come from where you expect them to.

Take another hunt in the Missouri Breaks in Nebraska. Three of us were sitting at the foot of a small wooded valley. The big draw up ahead had coyote written all over it, and I was about as confident as you can get on a coyote stand.

Twenty minutes of calling yielded nothing. Then one of my hunting partners whispered, “There’s a coyote up on that hill.”

There was a huge hill off to our right. I looked up there but could see nothing. There was plenty of snow across that picked cornfield so I should be able to see a coyote. Then I saw it loping down the hill, yet so far away it looked smaller than an ant.

Then it sat down and surveyed the valley we were sitting in.

“Don’t anybody move,” I whispered.

Coyotes are uncanny when it comes to pinpointing a sound. Past experience had proven that, and I just knew this coyote was looking right at us.

Then he got up, turned and ran away over the hill. 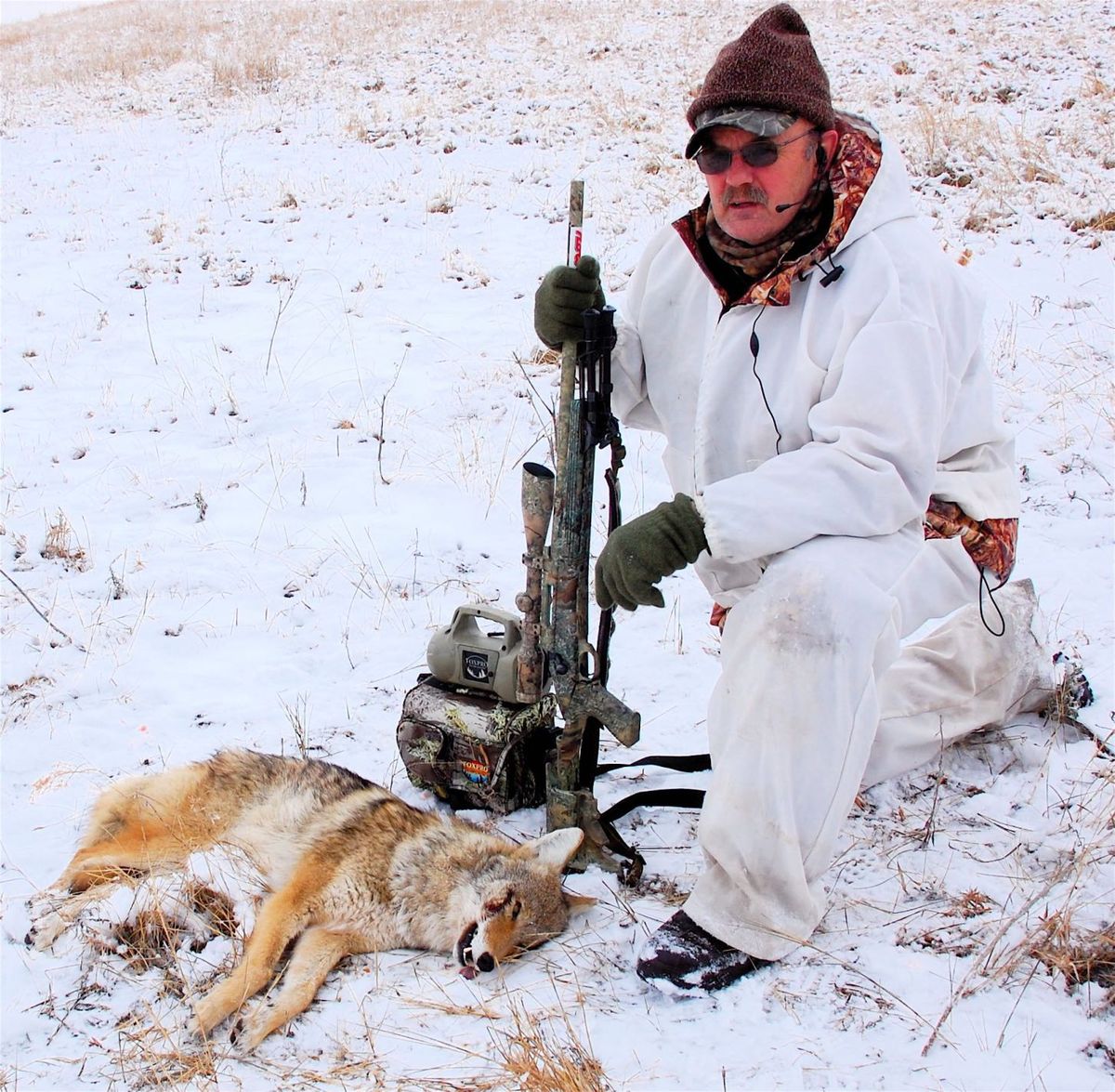 These encounters show why coyotes are so hard to call. All three will probably never respond to a call again. At least to a dying rabbit. That’s just how smart they are.

That’s why a dying rabbit call may not be very productive in populated areas. The coyotes have all heard it before and simply won’t respond.

Government trappers in Western states are constantly looking for calls that no one else is using, and they will not share that information.

Most electronic calls come with a wide variety of calls that the hunter can choose. Most have several different coyote howls, pups in distress, bird calls, fawn in distress and others.

If I were using an electronic call, and I sometimes do, I would use some of these other distress calls.

But if you can’t shell out a couple hundred bucks for an electronic call, don’t despair.

With the right mouth call you can imitate various other birds and animals in distress. This is easily done by fluttering your tongue and mixing up the cadence. The same with a crow call. You can easily do a crow fight or a crow in distress with these calls.

A mouse squeaker can be used as well. These usually have a rubber ball that you squeeze to make the sound and some of them are quite loud. On a calm day a coyote can hear a mouse squeaker from several hundred yards away.

February is the month a coyote’s thoughts turn to breeding. While howling is good all year around, it is especially productive during the month of February.

It’s a lot like hunting deer during the rut. Most of those big, old bucks would die of old age if they didn’t start thinking about the ladies in November.

Coyotes are similar. The dominant males become very territorial in February, and will not tolerate another male in close proximity.

Still when you are howling, it is best not to do so aggressively. There are also a lot of males out there who don’t want to get into a fight. So you don’t want to scare them away,

I usually start out with what’s called an interrogation howl. This is simply a couple of barks and a long, drawn-out howl. Listen for an answer. If you get answering howls, join in. Very likely they will begin moving to you.

I understand and agree that registration on or use of this site consitutes agreement to its user agreement and privacy policy.

When they do they will shut up and so should you. Just keep watch in their direction for them to show up. If they do and hang up, try a distress call if you can do so without them seeing your movement.

I think the most important thing you do when it comes to calling coyotes is to pick the right stand.

If you are driving a vehicle, you should park it out of sight at least two hundred yards away from your calling site and three hundred is even better.

Four wheelers are noisy so I like to leave them a long ways away before calling.

You will want a background behind you such as a cedar tree or anything to break up your outline. I like the site to be elevated so I can see well out in front and each side. You should wear full camo, including face mask and gloves. I like to hold my rifle on a pair of shooting sticks with the scope at eye level to minimize movement before I shoot. Once I get settled into a stand, I will sit there for about 10 minutes before calling. Maybe it’s just me, but I think it helps to let things quiet down.

You want the wind in your face or blowing across you, away from where you think the coyotes are.

Much of the time the coyote will try to go around you to come in from downwind if he can, so be ready for that. Make sure there are no draws, creek beds or brushy fence lines that will allow him to make his move without being seen.

I remember one hunt years ago in the hills lining the east shoreline of Lake Sharpe in South Dakota. Thousands of geese were keeping a small area of water open and coyotes were working ice trying to pick up cripples. It had to have been a year of record snowfall, and we stayed on ridge tops for fear of plunging into the snow over a deep gully. We could see at least a dozen coyotes on the ice near the geese.

Problem was, experience told us you could not draw those coyotes off the ice and into the hills where we were at.

I set up anyway and began leaning hard on my jackrabbit call. Within seconds a coyote popped up in front of me. I was squeezing the trigger with him in the scope when he turned and ran behind a snowbank to my right.

Minutes later I saw a pair of coyote ears poke above the snowbank right alongside of me. I knew it was over then because he would scent me. He did. The ears sank out of sight and I never saw him again.

Another coyote educated to the call.

It just occurred to me that every example of a coyote coming to my call in this column escaped. I assure you that I do occasionally bag one. I guess it is the ones that get away that I find most memorable.

← Prev: A Hunter and His Dog When it's Time to say Goodbye By Gary Howey Next: Tackle Tips, Getting into the sport of Fishing By Gary Howey →