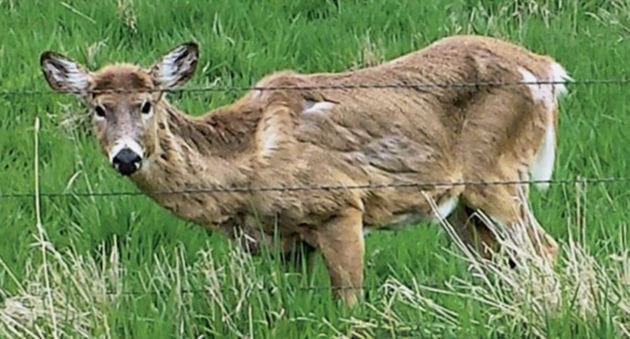 Chronic Wasting Disease affects the brain of deer, elk, reindeer, sika deer and moose and once affected results in the death of the animal. Photo is of a deer is suffering from the early stages of CWD. (Photo Courtesy of the Wyoming Game & Fish Department)

Through my binoculars, I could see something didn’t look right and that the deer didn’t look healthy, as it stood there along the fence line, it was nothing but skin and bones with its ribs showing as it was stumbling around, I wasn’t sure, but my first guess was that it was suffering from CWD, a disease that leads death of deer.

Since then I and most hunters have heard of CWD, Chronic Wasting Disease, affecting the deer population, but not knowing what exactly it is, what causes it and how it’s transmitted may be something few of us know about?

Chronic wasting disease (CWD) is a neurological disease affecting the brain that occurs when a malformed brain protein attacks the brain, beginning to kill off normal neurons. With the deterioration of animals’ brain functions, the deer becomes listless, confused, drooling excessively, emaciation, sometimes becoming aggressive and in the end, death

It’s a disease with no treatments or vaccines to stop the disease once the animal is infected it’s fatal.

Scientists believe that CWD is likely spread through body fluids such as feces, saliva, blood, or urine, either through direct contact or through environmental contact through soil, food, or water.

Chronic Wasting Disease, CWD has been found in deer in both South Dakota and Nebraska and once detected, hunters who took deer in those locations, are asked to allow the Game, Fish & Parks to remove the lymph nodes for testing, allowing the GF&P to study them and CWD in that area.

A video indicting what needs to be removed and sent to the South Dakota Game & Parks is available at www.youtube.com/watch?v=1XgNy1BfiH8&feature=youtu.be

In Nebraska the first confirmed CWD case was in 2000 in southwestern Nebraska in Kimball County.

Since 1997, the Nebraska Game & Parks staff have tested nearly 55,000 deer and found 800 that tested positive, with chronic wasting disease now found in 43 of the state’s 93 counties.

During the 2019 rifle deer season The Game & Parks conducted sampling in both northeastern and northwestern Nebraska, by removing the deer’s lymph nodes for testing.

The Nebraska Game and Parks Commission put together their Chronic Wasting Disease findings for deer during the November 2019 firearm season.  Results indicate that CWD was detected in Howard County in central Nebraska for the first time.

A list of those deer which tested positive is listed on the outdoornebraska.org/chronicwastingdisease web page, with the hunters who harvested those animals being contacted by Game and Parks.

The goal of this effort is to assess the spread of the disease through periodic testing in each region of the state, helping biologists to predict when and if future effects on deer numbers could occur.

The Center for Disease Control recommends that any deer harvested in a known chronic wasting disease endemic area should have that animal tested.

CWD was first identified in South Dakota in seven captive herds in the winter of 1997-1998.

In 2019 in South Dakota, CWD was recently identified in captive cervid herds, in Meade and Clark counties.

The first CWD case found in free-ranging wildlife was in a white-tailed deer in Fall River County during the 2001 big game hunting season.

These areas are considered priority surveillance areas and hunters with licenses to harvest animals in these areas will be mailed information on how to submit CWD samples.

During this period 231 elk were sampled, 215 came back not infected, with 16 testing positive for CWD.

There were 75 mule deer sampled and of those, 65 came back as not infected with 11 testing positive for CWD.

Of the 525 white-tailed deer samples 22 came back positive with CWD with the other 503 coming back as not infected.

Although CWD doesn’t affect humans, you can never be too careful and as I prepare to open up the deer, I wear plastic surgical gloves and once that chore is done, as I’m getting ready to remove the entrails, I’ll change over to long sleeve length plastic gloves before reaching inside the deer to remove the entrails.

We have excellent deer in the upper Midwest and by stud and diagnosing CWD, adding mineral supplements such a RAKS, planting winter forage for the deer, culling inferior deer and excess does, things will only get better.

Gary Howey,  Hartington, Neb. is a former tournament angler, fishing & hunting guide,  an award winning writer, producer, photographer and broadcaster, a recent inductee into the “National Freshwater Fishing Hall of Fame” in 2017.  Howey is also the Producer-Co-Host of the Outdoorsmen Adventures television series and Outdoor Adventures radio. If you are looking for more outdoor information, check out garyhoweysoutdoors.com, outdoorsmenadventures.com and like Gary Howey’s Facebook or watch his shows on www.MyOutdoorTV.com

← Prev: When the Weather is not fit for man or beast Next: The Outdoors Open 24-hours a day! →