When I was growing up in Watertown, S.D., where we fished, we did not worry about the current and the way it affected the fish. Why, well we did not know a thing about it, secondly, we were fishing in the Sioux River and lakes where current was not a big factor.

After moving down to the area I live now, Hartington, NE. where I would be doing the most of my fishing the Missouri River, understanding current became very important.

Anglers, especially those who fish down river from a one of the four Missouri Reservoir dams, need to pay close attention to what is happening at the dam, especially the amount of water being released or decreased, as a change in water velocity and levels drastically affect the location and mood of the fish.

I’ve heard it dozens of times where anglers have clobbered the fish one day and then the next not have a clue why fishing the following day will not be good at all.

In many cases, the reason things have changed is that the discharge from the dams has changed either raising or lowering the water levels and changing the current flows.

In many of the newspapers including the Yankton Press and Dakotan, they give a report on Gavin’s Point Dam, showing the water temperature of the lake, the amount of discharge as well as other information.

The water temperature on the lake, gives anglers and idea as to when the spawn will happen and the bite will begin to improve, while the information on the discharge is important, as the movement in the water causes all species of fish to change their patterns.

The best fishing is going to happen when there’s an increase in water flow as this means there will be injured baitfish coming through the dam, signaling to fish down river that it’s lunch time, causing them to move up stream to feast on what’s being washed through the turbines or over the spillway.

With the increase in water flow, there is an increase in current.  It forces fish to relocate, with some moving to the deeper holes, into current breaks or to the inside bend along the shore line to avoid the swift current while others, the more aggressive fish will move up to the head of the hole to be the first to the feed on what’s washing down to them.

The exception to the rule is channel catfish, since they seem to enjoy current and will eat about anything, they will move to the outside bend where the current is stronger, taking advantage of what is being carried downstream by the current to feed.

We know, because of the increased water levels and current, fish will move up to feed, it may be up below the dam or to the top of the hole they’re in, positioning themselves to feed on what’s coming down stream. 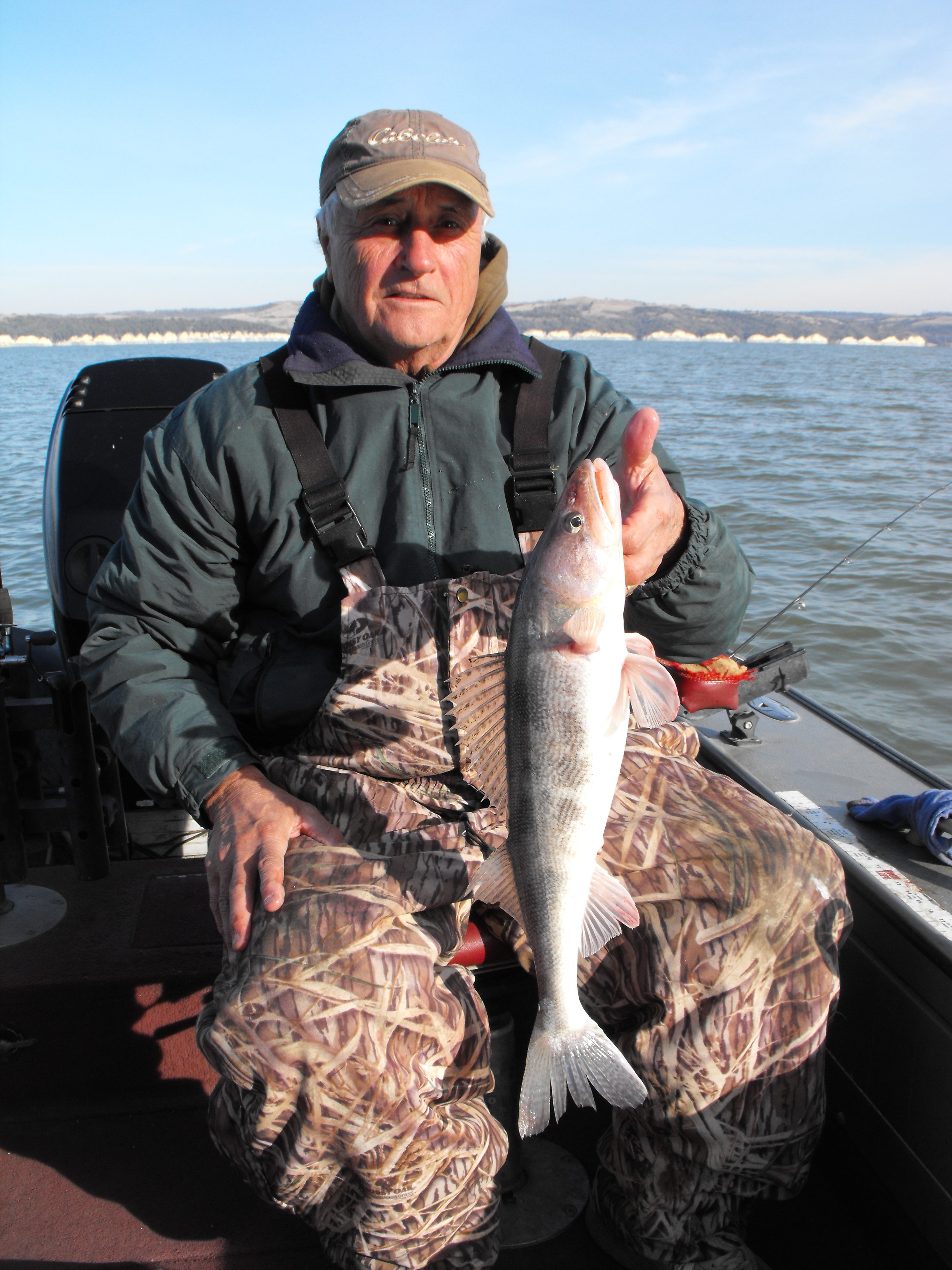 Roger Merkel , Hartington, NE. with a sauger taken from the MO. River when there was a water release from Ft. Randal Dam.

If you are fishing for a species such as channel catfish, you do not need to be too particular as to what bait you are using, as cats are opportunists and will eat almost anything. If you are fishing for walleyes, what bait you are using can make a huge difference. Since they will be in the current, I have found that the best bait in heavy current conditions to be pieces of cut bait with the skin still attached from silver carp or skip jack as its tough and will not come off easily in the current.

When fishing high water with heavy current, you will want to do your best to match your bait to what is being carried downstream.  Livebait is generally your best bet as what is coming through the dam and downstream at one time was livebait, so it is good to know what the main forage base that lives in the system is.

In the Missouri River, you will find a lot of shad, river shiners and assorted minnows, making them, depending on the time of the year, the bait you will see many anglers using.

I have found that when fishing for walleyes a Gulp Pearl White in the 3″/8 cm, Minnow Grub or the Pearl Silver 3″/8 cm minnow works well when fishing rising water levels.

I use these baits in place of a minnows, finding that I can catch as many fish, if not more than anglers using a minnow and because of their color, scent and toughness, I will not have to change bait as often.

When I am jig fishing, because of the increased current, I may have to go with a heavier jig just to keep the bait in the fish-catching zone.

If I’m casting or pitching a jig along a shore line or off a bar, I can get by with a lighter bait, but when fishing in deeper water where’s there’s current, a heavier 3/8th ounce jig helps me to get down and allows the bait to stay in contact with the bottom.

You can bait a jig with Gulp the same way you would a minnow, hooking it right through the head. If you are casting the jig, fishing weedy conditions or an area where there is a lot of trash, you may want to thread it onto the jig hook.

When you find the fish have moved out of the current into the inside bends of the river, where there is less current, a Lindy or Northland Roach rig produces well. When tipped with a minnow or creek chub drifted through the area takes many of the non-aggressive fish.

If you can anchor above or off to the side of the hole, or use your trolling motor to hold you in place, you can fish a crankbait. Try baits resembling the main forage base in the system, fan cast the water, starting shallow and working on down to the deeper water until you find the depth the aggressive fish are located.

Fishing high water with heavy current can be challenging while being very productive. Do not shy away from those days when the waters on the rise as it can be some of the best fishing you are going to find all year.

← Prev: It’s easy to get into a rut when it comes to fishing. By Larry Myhre Next: MOTV For the Best Outdoor Shows On the Planet →