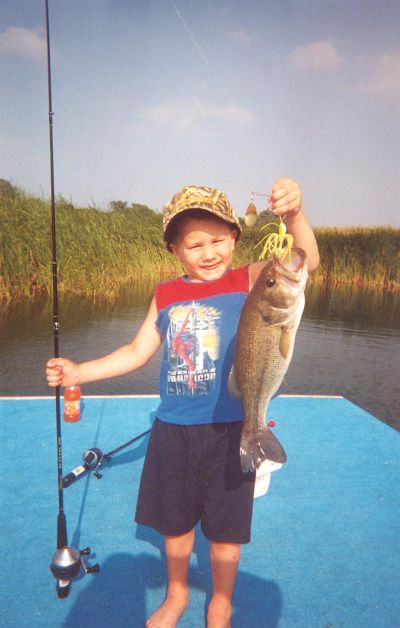 There are a lot of anglers that believe that in order to get into some big fish, they have to fish big water, like Oahe, Lake of the Woods, Waubay Lake and Lake McConaughy,

The truth is, that you don’t need to have thousands of acres of water to have a trophy fishery.

Many of the biggest fish I’ve ever caught came from farm ponds and stock dams.

Year in and year out, there are many Master and Proud Angler fish taken from smaller bodies of water, farm ponds, sand and gravel pits than there are those taken from the larger lakes and reservoirs.

These smaller bodies of water weren’t built as recreational-fishing ponds, they were sand & gravel pits, or built to supply water to livestock.

Once established, fish found their way into the ponds.  Some were stocked by the Game, Fish & Parks or the D.N.R., while others were stocked by landowners and some by neighbors.

The ponds that were stocked by or with the help of the Game & Parks and D.N.R. usually have a good balance between the predator and the prey and more than likely stocked with largemouth bass, bluegill and catfish.

In these smaller bodies of water, it’s the bass and the catfish that are the predator species while the bluegills are the prey.

If anglers start keeping a lot of the larger predator fish, the bass, it won’t take long to throw the body of water out of balance, and if the pond or sand & gravel pits doesn’t have a good predator/prey balance, chances are, you’re going to end up with a bunch of stunted, small fish because there just aren’t enough predators prey fish to keep the prey fish in balance.

If this happens, the bluegills become the predator, attacking the bass nest, devouring the eggs and the small fry.

In the western part of our states, there are also ponds, those that may contain good numbers of perch, crappies and northern pike and as in other ponds, the balance needs to be correct or everything in those bodies of water will have problems.

An ideal trophy fish pond would be one that has both shallow and deep-water areas.  The shallows are needed for spawning, the deeper water gives the fish a place to escape the prey fish and to take refuge once water temperatures begin to rise and during the winter months.

We’ve talked a lot about structure, which is needed, no matter how big or small of water you’re fishing and is something a trophy pond must have!  It doesn’t have to be much, some downed trees, brush piles or weeds will all fit the bill.

The structure gives the smaller aquatic life a place to live, which in turn attracts minnows and smaller fish and they attract the larger fish.  It gives them a place to look for food, to hide and keep from becoming food for larger fish.

If I come across a pond that looks like it has deep water areas and structure in the shallow water, I’ll spend a little time casting the shoreline and along the structure trying to temp a fish into biting.

I’ll start with something small, like a 1/8- or 1/32-ounce jig. tipped with a piece of worm or a small minnow, then gently pitch the bait along the edge of the brush or along the weed line.  If the shallow water drops off quickly into deeper water, I’ll go to a small slip bobber above my jig and let it work along the edge of the weeds.

If the water looks “Bassy”, I’ll go to a larger jig or a jig and pig combination and work the pockets, along the trees and brush piles.

When you’re fishing a larger jig, you’ll need to lay the jig down as gently into the water as you can, so as not to spook the fish.

Hop the jig back to shore or along the edge of the weeds, keeping a tight line at all times.

In the spring, these smaller ponds are really productive, as the bass have moved shallow to spawn and can be caught from the shore using a plastic worm, jig and pig or live bait.

It doesn’t take long for these smaller bodies of water to weed up, fish these in the early spring or from a boat so you’re not fighting late spring weeds.

With the warming water, fish move deeper where the water temperatures are cooler or along the edge of the weed line where oxygen levels are higher.

When the water warms try fishing ponds with shallow diving crankbaits, jig & pig or live bait in and around the weeds or the open water, where the best fishing is early in the morning or in the late afternoon and evening.

Even during the heat of the summer, fish will move from the deeper water into the shallows as the shallow water early in the morning and the evening the water is cooler to feed on insects and other shallow water critters.

During the day you may need to go deep, using a deep diving crank baits, Texas rigged plastic baits or jig & pig. You’ll want to fish the deeper water along the weed edge or deeper submerged brush and trees to find the fish.

You may have read or heard that bass hit like a freight train, which is not always true, there are times, when they’ll suck the bait in and if you have a bow In your line, you may not have the ability to set the hook properly and may not detect the bite and even if you do, the fish can spit it out before you know he’d picked it up.

No matter where you’re fishing, it’s always good to keep an eye on your line and if It moves to the side or your line goes slack before it reaches the bottom, rear back, setting the hook hard, because a bass probably has picked up your bait.

I remember what an old friend of mine once said, “jerks are for free and if you don’t jerk hard and set the hook every time your line goes slack before being on the bottom, or moves of to the side, you’ll miss a lot of fish.”

One thing we all need to remember when fishing these smaller bodies of water, don’t overfish them.

The predator/prey balance is very important in these smaller ponds.  Once this balance is thrown off, you’ll end up with a pond that has only the smaller fish.

A good rule of thumb to follow would be; for every one pound of predator fish (bass, pike, catfish) that’s taken from a pound, you should be taking about four pounds of prey fish (bluegill, perch, crappie) in order to keep the balance in check.

Catch and Release is very important in these smaller bodies of water, ensuring that these ponds, sand and gravel pits will produce quality fish and be there for the next generation of anglers to fish.

Give these smaller bodies of water a try, you’ll be surprised how big a fish can live in such a small body of water.