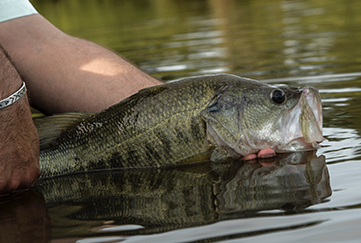 In the 1970s Don Keller and Barry Smith started American Sport Fish Hatchery in South Alabama. They are considered to be some of the most premier fishery scientist around. When it comes to sport fish management, largemouth bass, trophy bluegill, crappie, they are leaders and pioneers. In this article Don Keller answers some of the more frequently asked questions he receives from lake owners and fisherman.

I have seen bass that were 7 inches and fat spawn. Usually bass will spawn when they are one year old and approximately one pound in size in ponds in the south. In reservoirs and streams they may reach 6 to 7 inches at age one and spawn at age two.

Females may have from 3,000 to 30,000 eggs per pound of body weight. We usually figure about 5-10,000 eggs per pound for production purposes. Also, females usually do not release all their eggs. We have moved females that have already spawned to a new pond and get about 30 to 40 %of the eggs that we got on the first spawn.

Bass in cooler areas tend to live longer. The maximum would be 16 to 20 years. The average bass would usually live 5 to 10 years.

Last May we stocked a lake with 2 inch Tiger Bass finger-lings.  We came back to this lake in November and electro-fished the lake and were recovering bass over 2 pounds. We have seen bass that were 7 pounds at age two, 13 pounds at age four and 14 lbs at age 6 ½.  Three to four pounds in one year is max.

You can’t. The only way to tell for sure is by genetic testing. Biologist usually take a fin clip and send it to a lab. Coloration or pigmentation is not a way to tell.

The water is usually muddier or stained in the winter. The markings on the bass are determined to some degree by the clarity of the water and the color of the substrate. Clear water allows the light to pass through the pupil of the bass’s eye and strike the pituitary gland. This stimulates the bass to dilate special cells on the skin called melanaphores which contain melan, a black pigment. This reaction makes the blotches or barring on the bass much more distinct.

Yes and no. Maybe. Some bass are “homers” and some are “travelers”. One study found that 90 % of the bass caught, tagged and released were recaptured within 100 yards of the release point. Another study found that over 90% of the bass tagged and released moved a great distance, many traveled up to 16 miles away. This supports what I found in my study on Lake Eufaula. Some bass would be caught by anglers near where we released the fish while others would show up miles away at the other end of the lake.