The early upland game bird hunting seasons are just around the corner and the bird surveys that have been completed on the sharptail grouse and the prairie chicken seem to indicate good numbers of both species.

In South Dakota, the lek count indicates that the sharptail grouse numbers are up slightly, while the count for prairies chicken is down slightly, which pencils out to having about the same number of birds that were in the state last season.

Counting the male birds on leks, which are often called dancing or booming grounds gives the Game & Parks an ideas as to the number of birds.

The life span of these birds is short with about a 50% survival rate. Young of year birds usually outnumber adult birds in the fall.

Distinguishing the difference between the two isn’t difficult as the sharptails have a shorter tail with their two middle feathers longer and darker than the outside tail feathers; their sharp tail is the reason for their name. A sharptails feathers are marked with spots or blotches of a different color or shade.

The prairie chickens tail is short, dark, and rounded with the greater part of their feet feathered.

Hunting grouse on the prairie means that you have to cover a lot of distance, as the birds are generally in large flocks and found in the western grassland of the state.

In the morning in the spring both the grouse and prairie chickens dance or display or dance on the lek with the male prairie chicken raising the feathers on its head and inflating the orange sacs on their neck, trying their best to impress the females.

The females arrive at the lek each morning to check out the males as they strut, display and stutter step as they move around in a circle.

Once the female has mated, like other upland game birds she will tend the eggs and raise then young on her own.

One thing you can do to locate birds before hitting the field is something I learned from a friend when I first started hunting grouse.  He uses his binoculars to glass the larger pastures and grassland, as the grouse and chickens always seem to have a lookout with its head up watching for danger. He looked for their lookout and said they resembled a bowling pin sticking out of the grass. I’ve tried it several times and have located birds, but without glassing the field first, I would have had to walk the entire field before finding the birds.

When I was younger, I had a Brittney Spaniel, who led the way, nose to the ground through the fields as he worked to pick up the birds scent. We’d walk until we busted a covey, shot what we could and watched the direction the birds glided to and then walked again, covering several miles in pursuit of the birds.

On my last grouse hunt both my black lab “Mo Jo” and I were getting along in years, on this trip we concentrated on the pivot corners, which were smaller alfalfa or grass that the birds are feeding and resting.

We did well, but without “Mo Jo” would have lost many of the birds as the wounded birds glided and then went down into the acres and acres of irrigated corn. 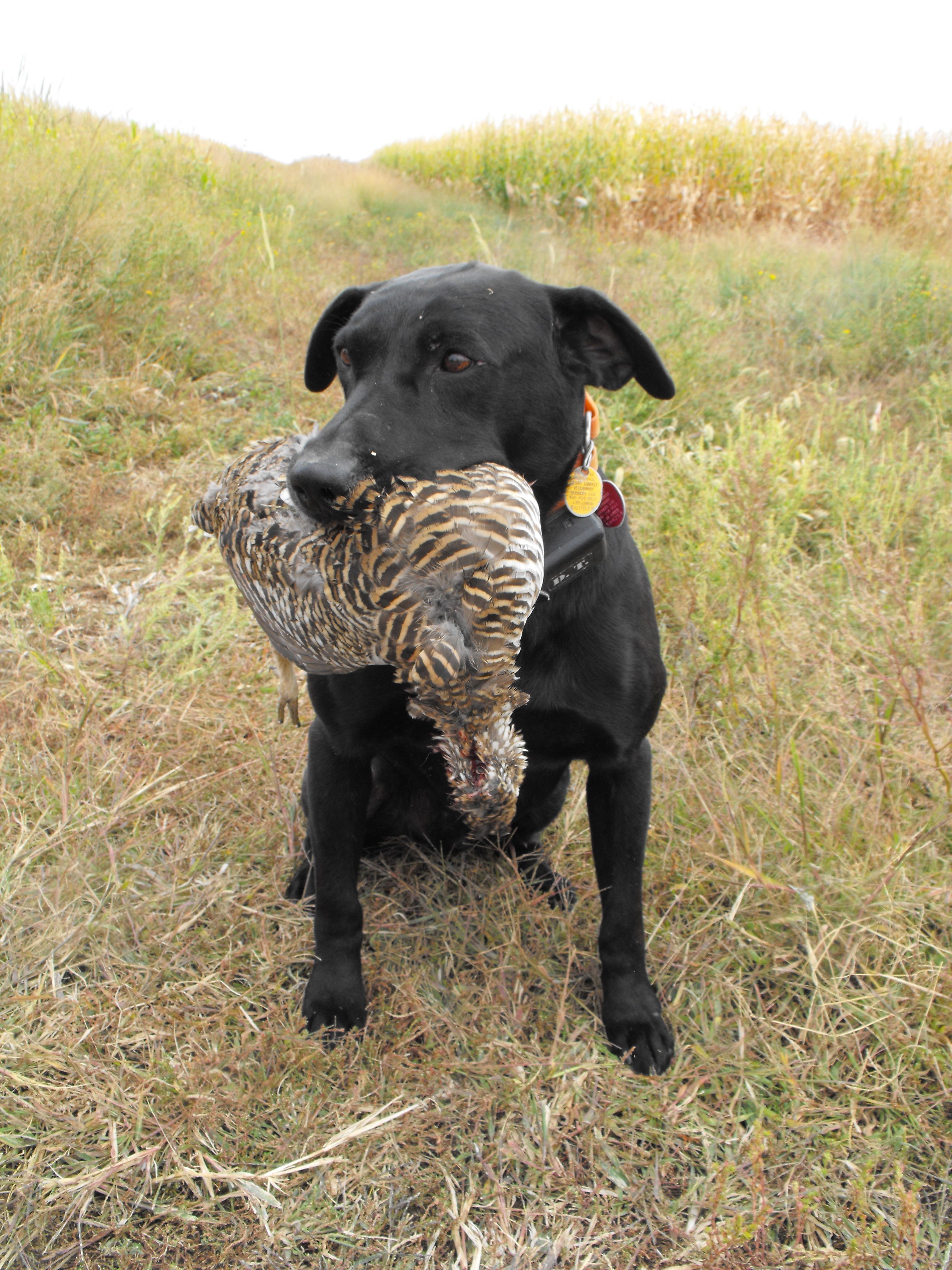 A good dog like the authors black lab “Mo Jo” is a blessing when hunting grouse and prairie chickens as without a good hunting dog, you’d walk by many birds and may lose and not find downed birds

These sandy fields are loaded with sand burr and theses little devils stick to everything: your clothes, the dog’s hair and in between the dog’s toes.

There’s a couple pieces of gear I use that will give you and your dog some protection from these burrs,  giving you more time to spend hunting and less time pulling sand burr. I like to wear a good pair of chaps as they do a great job protecting you from these prickly devils and those that stick to your chaps are easy to get off by running a knife blade over them.  For my dog, I purchased a set of dog boots and a belly vest that really helped to keep the burrs off your dog. The only way to get burrs out from between the dogs pad is to pull them out which can be painful to not only the dog, but also the hunter.

In Nebraska, both species the prairie chicken and sharptail grouse. The prairie chickens are located farther east than the grouse, as they can be found from the Sandhills on into northeastern Nebraska as well as in south central, southwestern and southeastern parts of the state.

The sharp-tailed grouse occupies more of the grasslands from the Sandhills into the Panhandle. In the state, there are areas where the birds range overlaps in the Sandhills where hunters may encounter some hybrid grouse.

Season Dates: The 2017 grouse and prairie chicken season in “South Dakota” is open statewide with the opener September 16, running through the year on into January 7, 2018. Hunters can pursue the birds from sunup to sundown with a daily limit of three and a possession limit of fifteen.

In the Cornhusker state, “Nebraska” there is two grouse, prairie chicken hunting zones, with both zones seasons opening September 3 and closing January 31, 2018.

The eastern zone is east of Highway 81, with its daily combined limit and possession limit of three birds. An upland game bird permit and habitat stamp as well as the special east zone grouse permit that are available through the Nebraska Game and Parks by calling their Lincoln office at 402-471-5110.

The western zone is the remainder of the state west of highway 81; the daily combined limit is three birds and a possession limit of twelve birds. The western zone birds are included with the purchase of the Nebraska upland game bird permit and habitat stamp. All Nebraska permits and their season dates are available on-line at www.outdoornebraska.gov.

Grouse hunting is a great sport, gives us an opportunity to hunt different parts of the state as well as different terrain. It may require a lot of walking, but when your hunting dog goes on point or flushes the bird and you, fire that first shot you’ll be on the road to becoming one of the numerous hunters who anxiously wait for this season each year.

← Prev: Getting The Most Out Of Your Clover Food Plots Next: 2 Tips For Successful Food Plots: Mowing and Broadcasting →