When Bill Christensen, Hartington, Nebraska asked if I would want to go fishing the following Monday, I was ready as I had not done much open water angling for some time.

Bill is a crankbaiter, loves to pull cranks throughout the year, which works very well, as you can cover more ground and takes the more aggressive fish.

I had all weekend to finish my next week’s column, and time to re-spool my two main jigging and livebait rods with lighter line, just in case the crankbait bite was off.

When we arrived at Santee, the dock was crowded with Santee police, tribal game wardens, along with a dozen other folks who were loading up to head out and look for an four wheeler accident victim.

They asked which way we were heading and asked if we happen to see anything to dial 911 and let them know.

Bill’s a  crankbaiter and likes pulling # 5 & # 7 Rapala and Berkley Flicker Shads using line counter reels spooled with 14# Berkley Fireline, its smaller diameter line allowed the baits to dive quickly and deeper, yet, when needed, had the strength to land large fish.

The reels, coupled to eight and ten-foot rods allowed us to spread out the lines, with the longer rods fished out each side and the shorter ones running straight out the back of the boat.

Once our rigs were ready, we checked to make sure that our baits were tuned correctly, running straight in the water, as if they are not, they go through the water erratically, not running smoothly, in a way that turns off the fish.  They will also run off to the side, running shallow. getting snagged up or tangling with your other lines.

This time of the year, with the higher water, there s a good chance there will be a lot of trash coming down the lake, grass, weeds, twigs and even logs and when this happens, we clip a small split shot about two to three feet above where the crankbait is snapped onto the line.

The split shot on your line intercepts grass, weeds etc. from following down your line, ending up on your bait and messing up its action.

But, It did not take us long to realize that even with a split shot above, the heavier current and trash coming downstream there was  trash getting by, fouling up the action of our crankbaits.

We begun using two rods apiece, but were forced us to go to three, as the trash, was getting past the shot and catching on the bait, throwing them out of tune causing the crankbaits to tangle with the other lines we were running.

Our first pass, at approximately 1.3 to 1.5 miles per hour against the current was uneventful, but as we started our second pass, the rod in the right rod holder bent over with the end of the rod thumping violently, indicating a good fish. 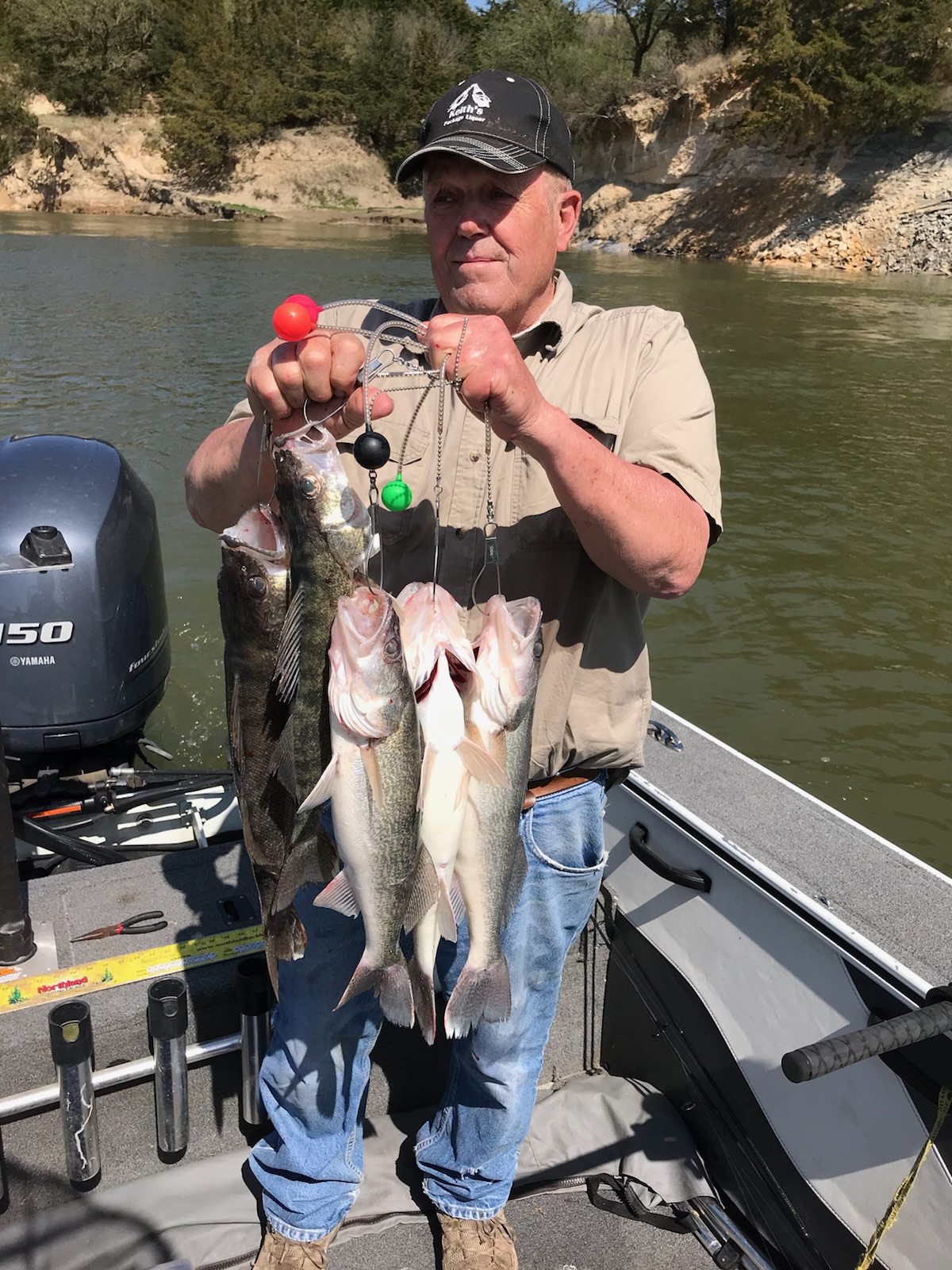 With the motor still in gear, Bill reached for the net, stepped away from the boats steering wheel and was ready land the fish.

I had the fish up and skipping over the top of the water, which keeps the fish’s head up with pressure on the hooks in its mouth, cutting down the chances that the fish would be able to throw or shake the bait loose.

As the fish neared the boat, Bill called out, “It is a good one, fish that has a mouth large enough for a tennis ball is a good fish”.

He was right and as he slid the net under the walleye, it looked to be a healthy keeper.

The male, which was still milking was just over twenty inches, a good fish and a nice way to start out our first open water-fishing trip of 2018 on Lewis & Clark Lake.

Our first two fish, both, keepers came from approximately the same location, so we worked that area over very well, picking up several short “Shaker” fish before deciding to begin making longer pulls, where we could cover more ground.

Throughout the four and a half hour trip, the bite was not fast and furious, but it was enough to keep us interested.

On a longer pulls, we boated two shorter fish, a beautifully colored sauger and a small walleye, that went back into the water to live another day.

Our next fish came as another angler from Hartington trolled up beside us, to give us a bad time and see just what we were doing to catch our fish.

Half way through a sentence, he indicated, “Why don’t you land that fish on that back rod?”

Turning, I could see the short rod mounted high on the rear deck was shaking good, yanking it out of the rod holder, holding the rod high and reeling, I brought the fish up on to the top of the water, skipping him to the boat where Bill gladly scooped up another large male walleye.

Pulling cranks in and out of the deeper water, we were able to land five large walleyes, nineteen inches plus as well as the two Shakers we released.

Crankbaits work throughout the fishing season, they are great locator baits, if tuned correctly, and trolled at the right speed allow the angler to cover more ground searching for active aggressive fish.

← Prev: Preparing a Dove Field: Sowing the Seeds of Success Next: On the Water The Firefighters/Paralyzed Veterans of America Memorial "Fishing Event" By Gary Howey →