The weather forecast for this two-day event was going to be a scorcher, but that did not seem to bother the attendees who showed up for this Memorial  event,  some were in wheel chairs, others walked with walkers, canes or assistance from family and friends, another great event allowing those with disabilities to be involved in.

Pulling into the staging area, the sound of the lift assisting those in wheelchairs, echoed across the Arrowwood Cedar Shore boat launch parking lot.  To some, it may have sounded rather loud and rough, but to those attending the sixteenth annual Firefighters/Paralyzed Veterans of America Joel Niemeyer Memorial “Gone Fishing “event, it was music to their ears.

With the help of the lift and assisted by several area students, the anglers  wheelchairs were tethered to by a special lift system that gently lifted them into the boats that would soon take them out onto the Missouri River, giving many of the attendees their only opportunity to get on the water and do some fishing.

Co-host Josh Anderson and I made the trip up to Chamberlain May 23 to film this 16th annual memorial two-day fishing event.

The event,  a memorial to Joel Niemeyer, who served as the executive director of the North Central P.V.A. for fifteen years, a strong advocate for veterans and one who truly cared about those who served and the P.V.A. members.

According to Bill Curry, one of the many organizers and volunteers of the event, the first event had sixteen participants and this year there were fifty individuals from several states as far away as Texas invited along with fifty boat captains and their first mates.

The boat captains, one of the numerous volunteers helping with this event furnished their boats and their time all in support of those veterans and others invited to participate in this event.

We would be the official videographers, capturing footage of the disabled P.V.A. members: disabled anglers, firefighters’ and volunteers on the water, fishing and enjoying this wonderful event.

Once the invitees arrived, their only cost incurred would be their South Dakota fishing license, as the P.V.A. would take care of Thursday night’s lodging at Arrowhead Cedar Shore Resort. With the volunteers and sponsors providing sack lunches, water and drinks in the boats for those on the water Thursday and Friday.  Sponsors along with local volunteers that included the North Central P.V.A., Firefighters from several states, and Veteran’s organizations would be there to provide the Thursday night group dinner held at the Oacoma’s Community Center.

As the boats started launching, we made our way north, with some boats heading for their secret fishing spots, while others fished off the points and flats along the river near several well-known walleye fishing locations.

Others motored to the south in the direction of the White River, with some venturing even farther south, hoping to locate that big fish hole that they had found the week before.

The Ranger bass boat with a 200 Mercury good friend Chuck Doom had furnished us got us up north quickly and when we arrived, several boats were already working the flats, trolling or drifting one ounce bottom bouncers and spinners, or Slow Death Rigs pegged with half a  crawler and a few trying their luck with minnows.

Others were slow trolling, 1.2 to 1.5 miles per hour pulling up to one hundred feet of line behind the boats using crankbaits, hoping to get into one of the more aggressive larger fish. 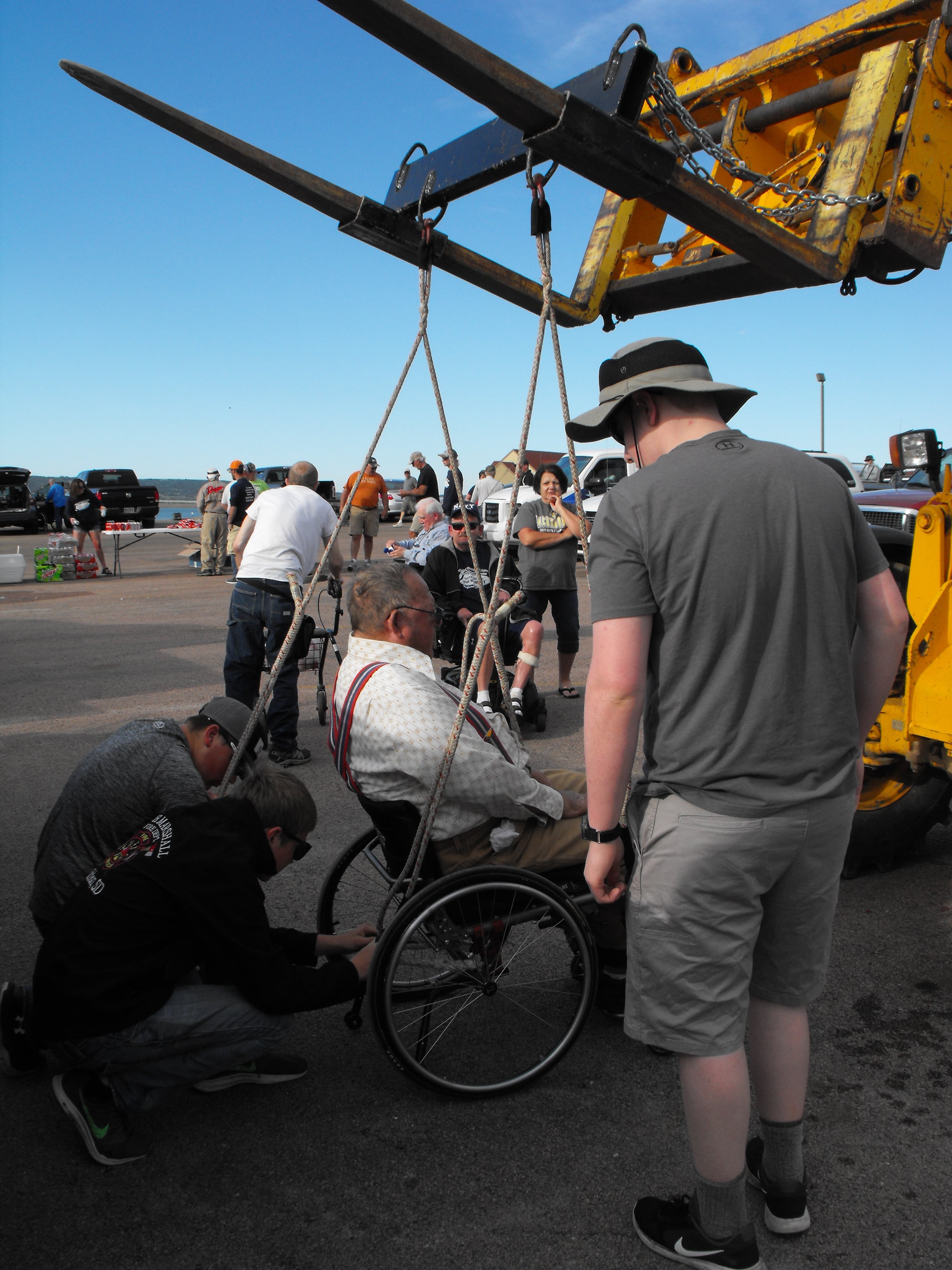 Wheelchair bound attendee assisted by area students to attach his Wheelchair into the harness that will lift him into his volunteer boat captain’s boat. (Gary Howey Photo)

The boat captains and their first mates worked hard to help attendees in their boats to catch walleyes, trying different presentations, different color baits, changing from crawler to minnows and using their kicker motors and bow-mount trolling motors to change the speed, while some drifted speeding up or showing down, looking for active walleyes.

We could see that the boat captains were experimenting trying to figure out what the fish wanted, with some of the boats taking fish, as the boat made a turn, which caused the inside baits to slow down while the outside baits picked up speed.

If the fish hit the slower moving bait on the inside rod, it was a good indicator the walleyes were looking for a slower presentation and the boat captains cut their boats speed, trolling or drifting slower.  If they hit the bait on the outside rod, the bait that sped up when making a turn, baits trolled faster were what the walleyes were looking for and the boat captains would change accordingly.

Some used boat brakes, a parachute type device attached to the front of the boat that they towed through the water, slowing their drift, allowing them to catch those fish that wanted that slower presentation.

Many of the fish caught appeared to have spawned earlier, as the larger females did not have the huge bellies that pre-spawn walleyes usually have and the males were not milking, indicating that the walleye spawn was nearing the end.

We filmed as several of those in wheelchairs set the hook, bringing several decent fish to the boat as well as several under the fifteen-inch size limit.

The warm “spring” temperatures, in the mid to high nineties, did not seem to bother those participating in the event as they patiently waited to feel the additional weight on the end of their lines accompanied by the well none head shake of a walleye which indicated they had a fish on.

We spent several hours up north, running from point to point and from one flat to another, looking for those boats marked by the American flag flying from the antennas and windshields as each boat captain received a small U.S. flag to attach to their boat,  indicating that they were helping with the event.

From there we headed south under the Missouri River bridges that span the river at Chamberlain, the river that separated South Dakota’s east river from the west river part of the state.

Coming into the White River area, there were a few boats working the points above and below, with several of the attendees showing us some of the fish they had landed, several in the fifteen to sixteen inch range while others had one or two fish over sixteen.

The rigs that they were using were as the anglers had been using up north, bottom bouncers and spinners, with crawlers out producing minnows for those fishing the White River area.

We continued running from one location to another, hoping to film as many of the event boats and anglers as possible, hoping to get as many folks as possible for our Outdoorsmen Adventures show that will highlight and show the event later this year.

After talking with several of the attendees to this year’s event, it was obvious that it was something; they looked forward to each year as it gave them an opportunity to go where many of them had not had an opportunity or been before. 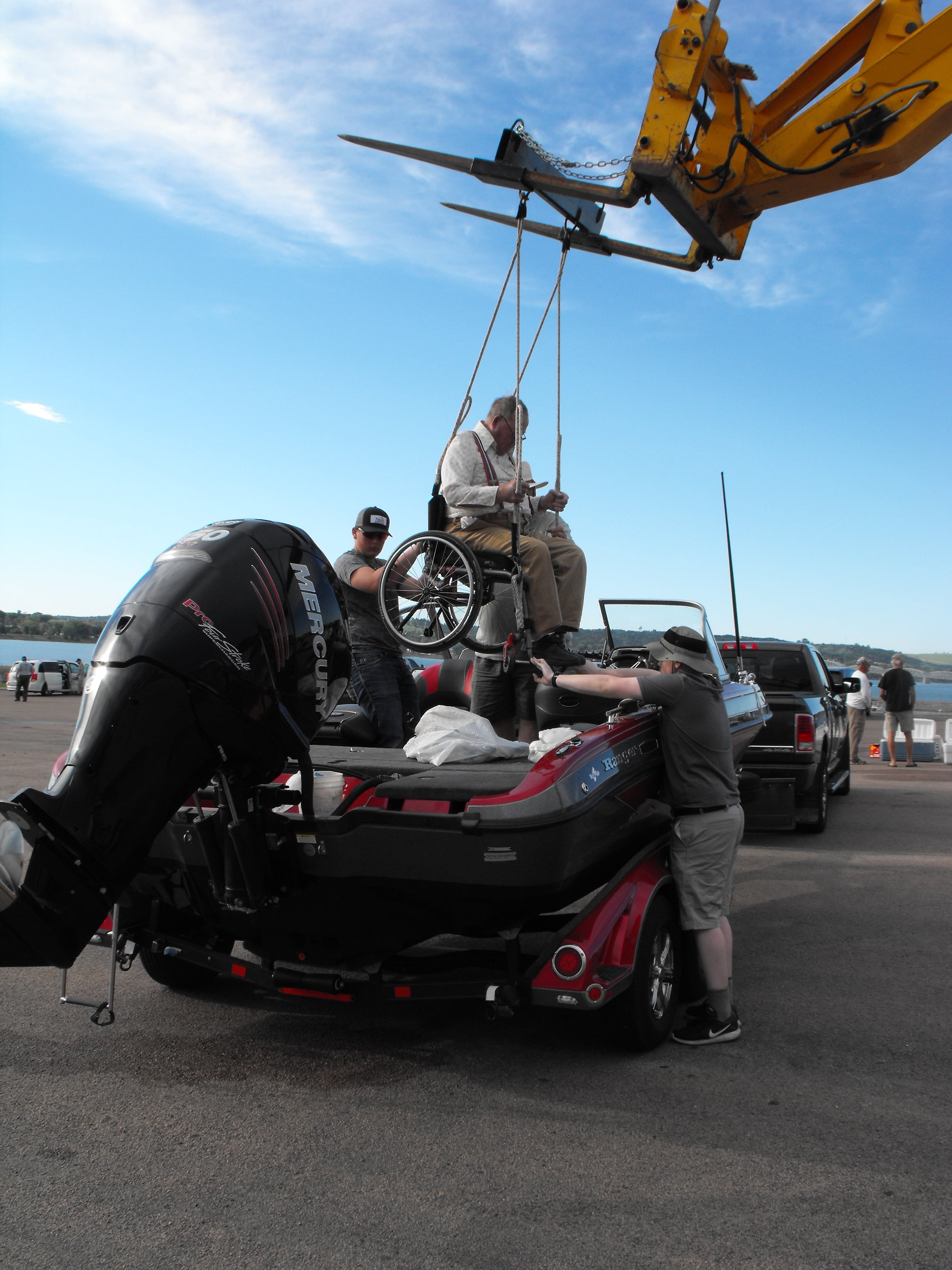 Students and the Boat Captain, guiding the wheelchair as they finalize the lift, helping the attendee to position his wheelchair, where he can safely fish from the boat. (Gary Howey Photo)

To some it was the highlight of their year, as several were already planning for next year’s event, asking about the 2019 event dates, so they would not miss it and could put it on their calendars.

This special “Fishing Event” is a monumental task as there are so many people needed to make it a success.

Beginning with those who worked with companies, locating sponsors for the event, coordination between all of those involved including the North Central Chapter of the Paralyzed Veterans of America, local veterans organizations, several states  firefighters, lodging, meal preparations, equipment operators, those helping to load the anglers, boat captains and the list goes on and on.

It is hard to fathom the amount of man, women hours needed to put something like this event together, from sixteen participants their first year  and in 2018 their sixteenth year,  the planning required for up to fifty participants.

The volunteers and sponsors of this “Fishing Event” have done such an excellent job, making this one of the big events for sixteen years in a row for P.V.A. members, disabled individuals, firefighter and others.