It happens every year around this time of the year, when we have calls at the office asking about ice fishing and where they’re biting.

With the colder temperatures we’ve had so far this winter, there hasn’t been a lot of ice made and with the warmer weather coming, it’s going to be awhile before there’s good ice.

There may be some ice building on bodies of water not snow covered, but on those ponds and lakes with snow piled on them, it’s more than likely not happening or happening very slowly.

Snow that piles on the unfrozen ground does the same thing to the ice; it acts as an insulator, not allowing the cold temperatures to get down and freeze the ground or the water.

Sure the ice may look solid, especially along the shoreline where the snow has blown clear, when in fact there are probably areas on the lake that have very little ice because of the snow that covers it.

Before heading out on any body of water to ice fish, we need to be aware of the potential dangers of ice.

The color of the ice is a good indicator to its strength. Look for clear blue ice, which is the strongest because it’s created by a sustained freeze.

Black, gray or honeycombed ice is unsafe because of repeated freezing and thawing. Discolored or dark spots suggest open water, thin ice, or possibly a spring, all of which are dangerous.

As I mentioned earlier in this column, snow cover insulates the ice, inhibiting solid ice formation and making it almost impossible to judge the thickness.

Ice houses, fishing piers and bridges absorb the sun’s heat and increase melting and vegetation will also absorb heat from the sun and rotting vegetation can create it’s own heat. Fish, muskrats, beaver and other animals swimming under the ice can also weaken it. This is especially true in shallow lakes and rivers. 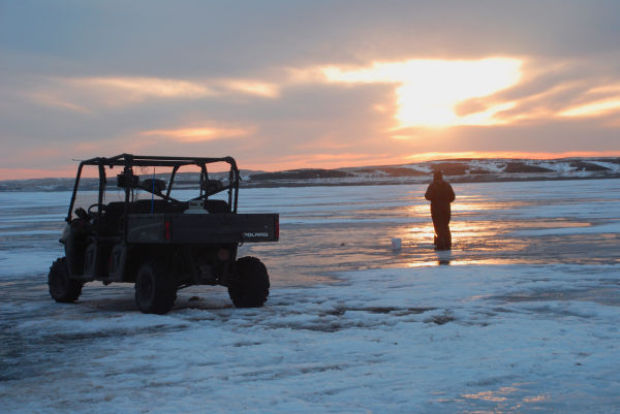 Any moving water weakens ice approximately 15% and wind creates pumping action forces water through the breaks and cracks enlarging them and making them bigger over a short period.

(Earlier in the winter, it’s a good idea to double the thickness to be safe).

• First, try to REACH the victim with a long pole, board, rope or blanket.
• Second, THROW the victim a life jacket, empty water jug, or other buoyant object.
• As a last resort, go to the victim. Should this be necessary, form a human chain to reach the victim? A human chain can be made by lying on the ice with each person holding the feet of the person in front of them.

Early Ice fishing can be very productive and a lot of fun, venturing out onto the ice to early can lead to a disaster, so don’t rush to get on the ice.

← Prev: You Should Start your Ice-Fishing Now By Larry Myhre Next: 3 Reasons Why You Should Practice Herd Management →