Exposure to the Sun, It can be Good, Bad and it can be Ugly By Gary Howey

Summer has not arrived and  we have had ninety-degree days, with more sun and warmer weather ahead.

A warm sunny day can bring a lot of warmth to people, especially those of us who long to be outdoors after our long cold winter.

When I was growing up as a kid, there did not seem to be a whole lot of concern about skin protection and skin cancer.

As I became older, skin cancer was more of a concern as skin cancer was on the rise and if I had paid attention to what was written and said about protecting oneself from the sun, I could have avoided some pain and surgery.

Too much of anything is not good for you”, especially when it comes to the sun, and spending too much time in it.

Who does not want to have a nice tan, but there is a very thin line when it comes to getting a tan and developing skin cancer.

We all need to take certain precautions as getting too much sun can turn into a life-changing event.

It is really not that hard to figure out, if you get too much sun, it can and will lead to skin cancer!

Some folks think that skin cancer is something others get but do not have to worry about because it will never happen to them.

We all need to be aware of skin cancer, as it can happen to anyone at any age and we all should know what we need to do, to prevent it,.

When a patient hears the word cancer, it will scare you to death, literally. That was the first thing that came to mind when I told that I had skin cancer.

I can remember vividly.  I had gone in for an annual Veteran’s Administration (V.A.) physical and thought I was home free when a dermatologist stopped in to talk with my doctor.

I mentioned that there was a spot on my lip that had been there for a while, not a big spot, anything that hurt, just a spot that would break open from time to time.

He looked at it, talked with my doctor and told me he thought it was “Cancer”.

I thought he must be wrong, as it has been there forever, since I was in Viet Nam, it never really hurt and really had not gotten any larger, at least on the outside.

There was no doubt in my mind that he had made a mistake, but when he ordered a biopsy, that is when I really started to worry.

How could that be, I thought that I had lead a pretty clean life, never really doing a whole lot  wrong, treated people the way I wanted to be treated, this just couldn’t be happening to me.

It had come and gone since 1971 when I was in the Army serving in the Central Highlands of Viet Nam. During an assault on our camp and our bunker, I ended up with shrapnel in my hands and face.  It was no big deal, the metal in my lip burnt a little, and I just pulled it out, and after the assault , had a medic look at it, he cleaned and bandaged the wounds, gave me a couple of pills and I went back to duty, never thinking much of it again.

When the dermatologist asked how long it had been there, I told him thirty years, he became extremely concerned, as did I when he told the male nurse he wanted it biopsied within the next week or so.

Of course my first thoughts were, I must have not heard him right, my hearing is not the best, so I asked him to repeat it, the next words out of his mouth were “Cancer” and we had better get a biopsy on it.

A few days later, they performed the biopsy and I spent the next week worrying about what the results might be.

When the tests came back, the V.A. informed me it was Melanoma cancer, the bad stuff. If it was Melanoma, I had waited way to long as Melanoma is the skin cancer that spreads out throughout the body and it did not look good for me.

The V.A. made several appointments for me with a plastic surgeon, who told me the only way to see how far it had spread was to keep cutting until there were no signs of the cancer.

Too say the least, I was worried, as I was in my forties then and thought there were many things I would like to have accomplished before leaving this world.

The surgeons and my V.A. doctor set up the surgery in Sioux Falls V.A. and when it came time for the surgery, my wife drove me to the V.A., where they got me prepared and rolled me into the operating room.

I do not recall how long I was in there, but once I came out of it, the surgeon said, that he thought the diagnosis may have been wrong and it may not be Melanoma and that it could instead Squamous cell cancer and they thought they had gotten all of it.

Once I heard back that it was squamous cell cancer, talk about being relieved, and today many years later, the cancer has not come back and I have become much wiser about how I prepare when I plan to spend time in the sun.

As many of you know, I have  always been an outdoorsmen, hunting, fishing, trapping, outside all the time and I knew that the sun could give me problems, but I never really took enough time to protect myself.

When I guided and fished in tournaments, I did not use much, if any sunscreen because I worried about getting a scent on my hands that the fish could smell which would affect my ability to catch fish.

Which is really STUPID?  So what if I catch a few less fish on the  trip, if I get skin cancer, I’m going to catch a heck of a lot less fish as I may die at an early age from not protecting myself from the sun.

Ever since that day, I worry about skin cancer as you should, if you spend much time outdoors.

You do not have to be injured, as I was to get skin cancer; you can get it by spending too much time in sun, while camping, fishing, hiking or just lying out on a blanket trying to get a tan. Skin cancer is the most common form of cancer in the United States and one that is easy to prevent.

There are three types of skin cancer, the two most common types being Basal cell and squamous cell cancer.

Most people are aware of Basil cell as it is the type of cancer, that is removed by freezing or burning it off and usually found on the head, face, neck, ears, hands and arms and can be dangerous and spread if not taken care of in its early stage.

Squamous cell is more serious as it may spread quickly if not taken care of and needs to be surgically removed.

Melanoma is more dangerous as it spreads throughout the body rapidly, but it is less common.

Most anyone can get skin cancer, but it is most common in people who spend a lot of time in the sun or have been sunburned, have light-colored skin, hair and eyes have a family member with skin cancer and those of us over the age of fifty.

There are a millions of cases of non-melanoma skin cancers diagnosed every year in the U.S. and they continue to be on the rise. 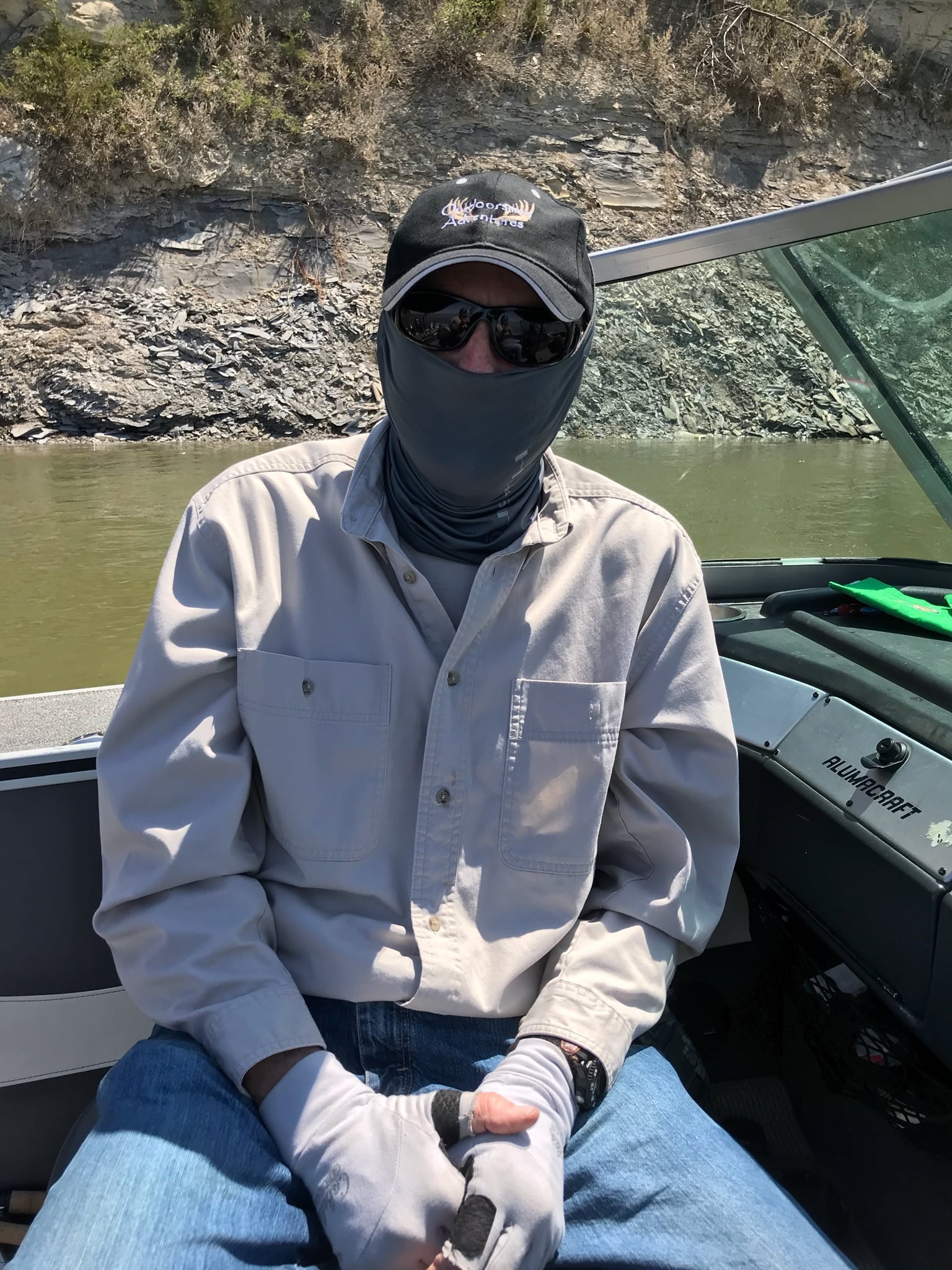 Anglers, like the author, including guides and tournament anglers, those who spend a lot of time out on the lake, river or pond are covering up, appearing to be about to rob a bank. We are realizing that we need to protect themselves from the harmful rays of the sun, especially when we are on the water. (Gary Howey Photo)

In many of these cases, it could be prevented by simply avoiding prolonged exposure to the sun, protecting your skin with clothing and by using a good sunscreen.

It is hard to believe that all it takes to protect yourself from skin cancer is to apply a little sunscreen.

One thing you can bet on is that there is a huge difference between sunscreens!  You want one with a Sun Protection Factor SPF of at least thirty or fifty.  You will want one that has both UA and UAB protection and waterproof and sweat proof.

Apply it liberally, thirty minutes or so before going out into the sun and it is good idea to reapply it every fifteen to thirty minutes after that as it as an important part when it comes to applying sunscreen.

Protect your nose, ears and lips because they are hanging out there and will receive the largest amount of sun.

If you do not want to end up with sore cracked lips, you will want to use a lip ointment, I use Dermatone lip balm that not only keep my lips moisturized when you are in the sun; it is also going to protect themselves from the harmful rays.

Anglers, like myself, worry about the scent of a sunscreen they might use as they do not want to transfer that scent to their line, bait and tackle.

Several companies including Dermatone make Ultimate Sunscreen for Fishermen that is fragrance free and one that will not degrade your fishing line.

After my bout with skin cancer, I wised up and when I am on the water, I cover up, wearing mu HUK UPF 50 protection neck and head gator, a HUK  long sleeve shirt with +30 UPF sun-blocking, and spray myself with an SPF water resistant sunscreen and wear Cabela’s men’s half-finger sun gloves.

I was lucky, but I would not want to rely on luck when it comes to getting skin cancer. Do not let cancer stop you from enjoying life and the great outdoors!

Cover up, apply sunscreen, avoid excess exposure to the sun, and your outdoors experiences will be a long one and be a lot more enjoyable.