Fall fishing heating up on natural lakes By Larry Myhre

There’s no better way to judge the quality of a fishing lake than variety.

Gary Howey, Hartington, Nebraska, and I joined fishing guide Jarrod Fredericks for an afternoon go at what Poinsett had to offer.

We weren’t disappointed. Jarrod sent his Minn Kota Talon to the bottom in eight feet of water to anchor our boat on the edge of a boulder pile that gave way to a gravel and sand flat.

“We get big smallmouth off the boulders as well as good-sized crappies,” he said. “Perch and walleye work the edge of the rocks over the gravel.”

It didn’t take long for us to prove him right.

Gary soon hooked up with a scrappy smallmouth on his 1/8-ounce, minnow-tipped jig. Another smallmouth inhaled my 1/16-ounce, marabou jig to put me on the board.

For the next couple of hours, the smallmouth kept us busy, but we also added some nice walleye and pound-plus crappies.

We each put a dead rod over the side with a 3/16-ounce tungsten jig tipped with a piece of crawler. Smallmouth are notorious for following your cast back to the boat and then setting up residence under the boat. The dead rods proved that, but we also took several walleyes using the same method.

After awhile, Jarrod dropped a Jiggin’ Rap over the side and proceeded to give us a lesson on this technique, which is a “must” method for any serious walleye fisherman. As soon as he dropped the Rap to the bottom and gave it a snap, he was hooked into a two-pound walleye.

After releasing that one, he went back down and, I swear, no more than two snaps and he bagged another walleye.

While this spot had produced big perch for Jarrod in the past, they were absent on this day.

“We may have to troll crankbaits to get them,” he said. “We’ll save that for tomorrow.”

We anchored in two more spots that afternoon and each produced smallmouth and walleye.

I was surprised at the number of boats that were fishing that afternoon. There were lots of trailers and rigs at the boat ramp on the east side of the lake. Most of these anglers were in pursuit of the jumbo perch for which this lake has become famous.

Last winter the lake received tremendous pressure from ice anglers as the big perch bite heated up. It’s amazing how quickly word of a bite can spread through social media nowadays.

It’s a far cry from the days when I first fished this lake in the early 1960s. I’d drive up and launch my 12-foot wooden boat with a 7 1/2-horse motor and fish for whatever I could catch. That was mostly walleyes, white bass and northerns. If Poinsett was slow, I’d slide over to nearby Lake Albert and fish for bullheads. I slept in my car.

It was also where Fran and I spent our two-day honeymoon in August 1964. I caught a nice stringer of walleye, white bass and northern while wading one evening off the shore at our resort in the southwest corner of the lake. 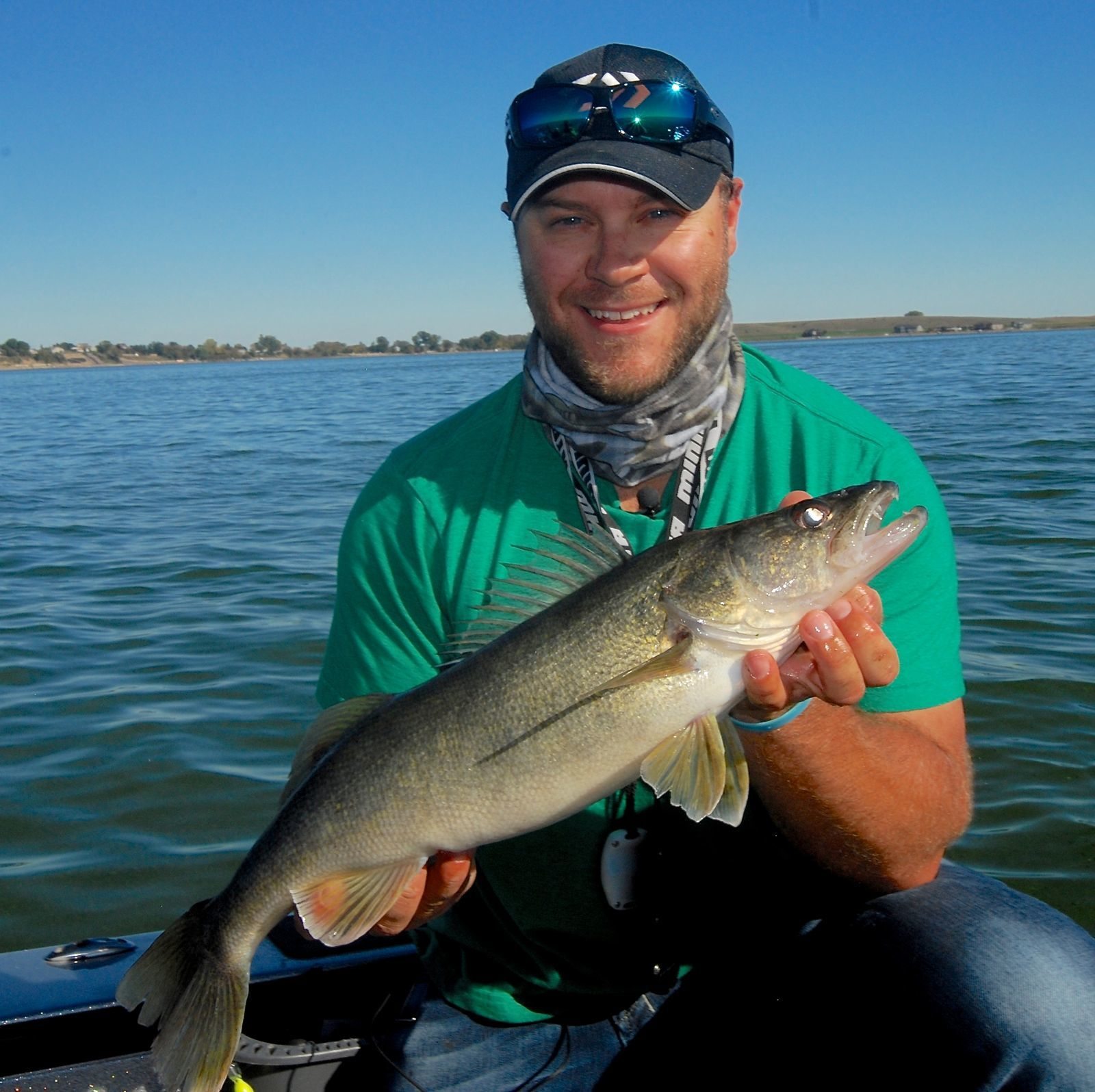 Jarrod Fredericks holds a walleye taken on a Jiggin Rap.

Our trip to this lake was a short one. Gary and I decided to spend an afternoon and most of the next day fishing here. We headquartered at the Dakota Ringneck hunting preserve lodge just abut a half mile east of the lake. Check them out at www.dakringneck.com.

The next morning we met Jarrod at the boat ramp and headed out with jumbo perch on our minds. We anchored in a couple of perch spots, but didn’t find much at home. That’s when we decided to put out the crankbaits and troll.

We trolled in that 2- to 2 1/2-mile-an-hour rate. Our first walleye came before we even had the second lead core rod out.

The action was constant and often for both walleye and perch. The walleyes were on the small side, but we weren’t keeping any fish on this trip. The perch were running from 1/2 pound to a pound. Our lures were size 5 shad imitation cranks.

We trolled about half the length of the lake and picked up fish nearly all along the way. We finished up in the southwest corner where I counted 18 boats fishing a perch hotspot. It was early afternoon, but we had everything we needed so we headed in for the nearly three-hour trip home.

Jarrod is also publisher of the Outdoors Weekly magazine headquartered in Pipestone, Minnesota. Their web site is www.outdoorsweekly.com. Jarrod guides both open water and ice fishing, but his specialty is wintertime fishing. Check out his web site at www.southdakotaguidedfishing.com.