Fall offers the best fishing of the year By Larry Myhre

If you are thinking about winterizing your boat and putting away your fishing tackle for the season, don’t do it.

From now to ice-up is the finest time of the year to catch fish, particularly big fish.

As waters begin to cool, fish instinctively know to feed up big, storing fat and energy to take them through the lean days of winter and, for the females, maintain the developing eggs within them.

To be successful, however, you need to change tactics. What worked in the summertime will not work very well in mid to late fall. Take weedlines, for instance. In the summer that was the place to be. In the fall weeds begin dying and fish leave the area. There are exceptions, however. If you can find green weeds, fish them. Green, healthy weeds in the fall are a magnet for all game fish.

A couple of general rules must be considered.

First, fish tend to move into deeper water in the fall months. Deep rock piles and deep, fast-dropping points are two good areas, particularly for walleyes and bass. Also when you look at a depth map of the lake, seek out areas where those contour lines come close together. These are fast-dropping areas where fish are likely to be.

Second, you must slow down your presentations. The later it gets and the colder the water gets, the more this holds true. Fish are cold blooded creatures and their activity level will slow with colder temperatures.

What about presentations? Well, bigger is better in the fall. All of the forage fish have grown in size. Young-of-the-year perch could now be 4 or 5 inches long. Baits such as very large minnows or chubs will be preferred.

This is also the time to haul out those hair jigs. There’s just something about hair jigs in cold water. Walleye and bass like them. Tip with a large minnow and vertical jig them in fish holding spots and you will catch fish.

Spinners and minnows may be the best way to go if you can’t get your hands on some good chubs. I make a copy of Cap Kennedy’s old Killer rig which is dynamite in cold water. It is a spinner on a wire with a long shanked hook covered in deer tail hair. Tip it with a minnow and troll it along a sharp drop off. The photo with this column shows a walleye taken on a Killer Rig.

Also try plain live bait rigs. A 30-inch snell with a minnow or chub is often very effective. Put a bead on the snell above the hook if you want.

One of the latest techniques is to vertically fish a Jiggin’ Rap over deep points or rock piles. 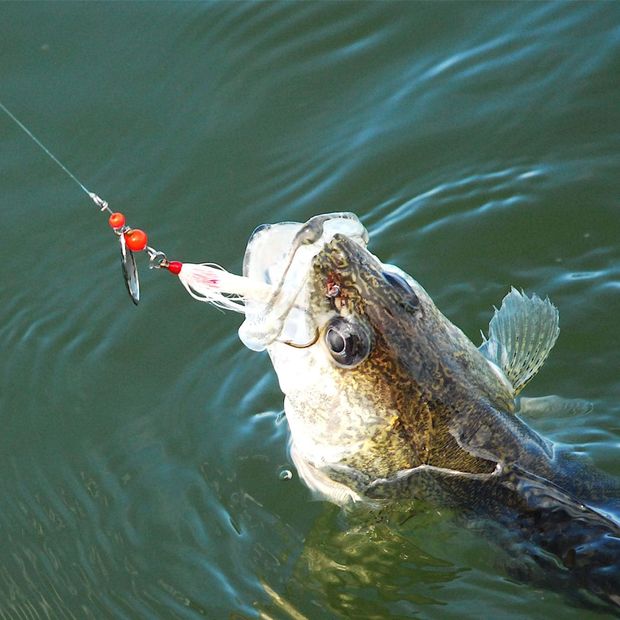 When it comes to catching big walleyes in late fall from deep water, there is an issue which we must address. It involves catch and release, or more specifically catch and kill.

If you are down 30 feet or more and bring a walleye up from that depth, it very likely will have its air bladder hanging out of its mouth. This is a fish which cannot be released. I’ve even brought up walleyes that were dead by the time they reached the surface. When this happens its best just to leave these fish alone.

Yes, we’ve tried the “fizzing” technique. That involves puncturing the fish’s air bladder with a hypodermic needle and let the excess air bleed away. The jury is still out on this procedure as to the survivability of fish after this is done.

The walleyes you take in this deep water will very likely be big fish, 4 pounds on up. Those are not the best-eating fish and are important spawners.

Note that the walleye is not the only fish which suffers this swim bladder issue when taken in deep water. Bass, northerns and muskies will blow up, too, as will panfish.

When it comes to panfish, perch, crappies and bluegills, these fish are commonly caught and kept. So, you are really not doing any harm by fishing deep water for them. So, let your conscience be your guide.

Incidentally, fish such as lake trout, salmon and some other cold water fish do not suffer from inflated fish bladders.

While you can be assured that there are large schools of all gamefish in deep water during late fall, there will also be shallow fish. Drifting down a shoreline casting jigs can be very effective and a lot of fun.

While the fishing is best very early and very late in the day during the summer months, there’s no reason to roll out of bed very early in the fall. Best fishing often occurs around mid day. While a light wind and cloudy conditions are always a good thing for fishing, in the fall I’ve caught a lot of fish on clear sunny days with no wind. Like we said earlier, the fish are feeding.

I’ve always maintained that the most trophy fish of all species are taken in the fall with springtime coming in a far second. So, stay at home and watch football if you must, but I will be out there regardless of the temperature putting fish in the boat.

← Prev: Four Tips for Eliminating Scent Transfer Next: Heat Dog on hard on your hunting dog By Gary Howey →