Fish the Topwater By gary Howey 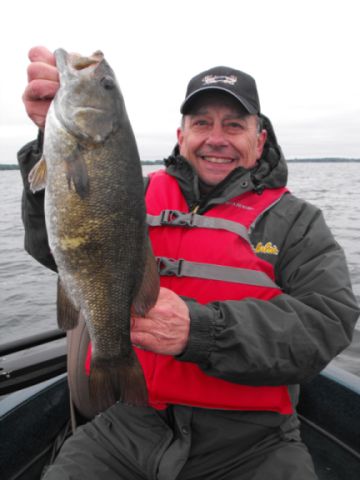 Team Member and 2016 Inductee into the “NATIONAL FREASWATER FISHING HALL OF FAME”, Larry Myhre with a beautiful smallmouth bass he took using a spinnerbait run along the top of the water.

In the spring, early summer, when the weeds crowd the shore and onto the top of the water, fishing can be a nightmare, as it can seem to be almost impossible to fish theses small ponds and clearer lakes as you’re always pulling weeds from your baits or snagged up.

Most species of fish will come up to the surface to take a frog, duckling, mouse, bat, grasshopper or other insect, this is when fishing surface lures is very productive.

In order to fish the surface, an angler needs a little open water before getting into a weedy area as surface baits need to be moving in order to skip or walk across the weeds.

According to several outdoor publications, “The Ten Best Surface Baits for bass include: the

With its cupped the front end, the “Hulu Popper”, grabs surface water with each short jerk of the rod, makes a “bloop” sound, that brings fish from a distance, producing vicious strikes.

It not a bait that can be fished in the weeds as it’s not weedless and works best along the weeds or in the open few feet of water near the shoreline.

The Jitterbug has a double cupped lip at the front of it, that produces a fish attracting ruckus working best once the sun sets and it gets dark, you’ll want to work the bait with a jerking motion of your rod, as this lure works well with either a steady or faster retrieve as the mood of the fish changes from day to day, so if one retrieve doesn’t get a strike, try the other.

It’s also weedless, working best alongside weeds, above flooded structure and in the shallow water along the shoreline, as the sun sets, when bass will be feeding shallow.

With the “Zara Spook”, you’ll need to use the “Walk the Dog” method, which means the angler uses his rod to work the bait right and the left, after a couple of scenarios, let the bait sit, as the circles around the bait dissipate and if you don’t get a strike, continue doing the same thing, it’s isn’t weedless, and works well in the same location as those baits listed above.

I’ve caught some truly largemouth using the Northlands Buzzard Buzzbaits and their Buzzbait Classic baits, Including one of my biggest a bruiser that I lost while filming an outdoor fishing show with good friend and Outdoor Celebrity John McLaughlin, Des Moines Iowa.

I’d cast my Buzzard Buzzbait close to the shore line, towards a submerged log, cranking hard and holding my rod tip high, keeping my bait on the surface, as it came past a submerged log, an

enormous mouth of a giant bass broke the surface below my lure, I quickly set the hook, way to quickly before the fish had its mouth over the bait, and as my bait came flying back to the boat, a huge tail broke the surface as the fish dove back into the depths.

It’s hard to wait a millisecond until the bass has the hook in its mouth before setting the hook, which a buzzbait angler needs to do unless the bass comes out of the water and down on your bait.

Spinner baits are also excellent baits to run across the surface when worked through the weeds as its spinning blades knock the vegetation out of the way of the hook.

The “Devil’s Horse” is a slender surface baits with a spinner both on the front and on the back and when retrieved will churn up the water and retrieved normally. It’s deadly on bass when fished in water from four to twelve foot.

Like the Buzzbait, you need some open water to bring the bait to the top, in order to run it along the surface, creating a gurgling sound, while the blades, send vibration through the water that is detected by the fish’s lateral line allowing the fish to zero in on your bait.

Snag Proof Frogs, as it name implies are a soft body weedless topwater bait, imitating a frog with its hook concealed in the belly of the bait.

You can throw his bait right on top of the weeds or into open water, and as you retrieves the frog along the surface with a back-and-forth movement, that imitates a frog swimming along the top of the water.

I’ve used several of those methods listed above including the Hulu Popper, Jitterbug, Zara Spook, Devil Horse, Snag Proof Frog, as well as Clatterbaits and Spinnerbaits.

Bluegill, sunfish, crappies the Panfish, will take smaller surface baits such as a small poppers, small spinnerbaits, grasshoppers or crickets.

When fishing a small popper or insects, as they don’t weigh much, you’ll need some added weight in order to cast the bait i out.

I use a small clear bobber attached to the line in front of the popper or insect about ten inches, in order to use these baits, you’ll need some open water between the surface weeds or fish them over and above the submerged weeds just below the surface.

Poppers have their own hook, but when fishing insects, it’s best to use a small hook, allowing the insect the to move around on the surface to attract the fish.

No matter how you choose to fish top water, when the water warms, there’s few baits that will beat a top water.

← Prev: Invasive Species-What's a Veliger, You Ask? Next: The Gamekeepers of Mossy Oak, Wood Duck Boxes: Why, Where, and How BY Jeff Dennis →