Fishing in the Wind, Drift Socks are the Key By gary Howey 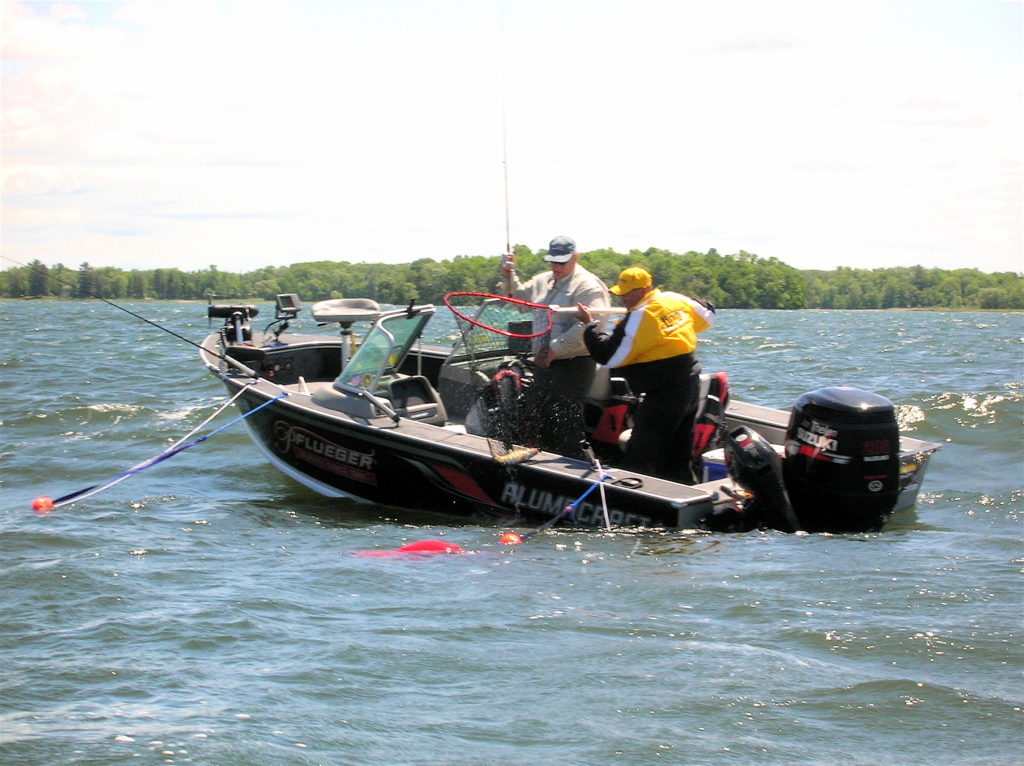 When the wind picks up, spoiling your fishing, don’t pack up and leave. Do like these anglers did, deploying two drift socks to slow their drift, allowing them to fish slower and present their bait properly.  (Larry Myhre Photo)

Anglers who do much fishing know in order to have good walleye fishing you’re going to need some wind or a Walleye Chop.  You don’t need a lot of wind, just enough to ripple the surface, which cuts the light penetration allowing the walleyes to move up shallow to feed.

What do you do when you get to the lake and that walleye chop, the wind has picked up considerately making fishing miserable?

There’s a couple of choices; one would be to head out and hope the wind would eventually die down, another would be to set it out and wait for the wind to calm down. Which, could be several hours or even several days and if you’re out for the weekend, you’re not going to get a whole lot of fishing in while waiting for the wind to lie down.

The only other choice, as I see it, is to use a drift control device or drift sock.  I’ve used them for years and when the wind picks up, they’re the only thing that’s going to save the day.

These boat control devices have been around for years and depending on where you reside, are known by several names including; drift socks, slow-down devices, boat brakes, boat-petitioners, current-compensators and sea anchors.

Just what does a drift sock do for you? They slow down the drift or speed of your boat in the windiest of conditions, giving you drift control. With a drift socks anglers are able to fish where others without one will have all sorts of problems in heavy winds.

Drift sock allow the anglers to fish an area more efficiently and not have to be on the throttle all the time, fighting the wind.

They allow the angler to fish, keeping the boat straight, slowing down the drift of the boat and make fishing in the wind much more enjoyable.

As any angler who has had to fish in the wind can tell you, drifting or trolling too fast can be a real pain. By using a drift sock, you can slow down your drift, allowing you to present your bait the way it should be.

They help anglers properly position their boat while drifting; keeping high waves from washing over your transom and used to hold your bow into the waves while trolling.

The braking action of a drift sock allows you to fish those hot spots more effectively, keeping you on the fish longer.

If you’re a bass or Muskie fisherman, they also give you more time to fish an area without blowing right on by it!

Another thing a drift sock will do is to cut the bounce, keeping the boat level, allowing you to fish vertically, where you’ll have better feel and contact with the bottom.

Drift socks will also help you to compensate for the current when fishing the river, allowing you to position your boat and present your bait properly.

They also allow you to position the boat while drifting so all anglers in the boat are able to fish through those productive areas.

Another very important thing a sock can do is be used as a safety device in case of a break down.

A drift sock can be deployed in case of an emergency, helping to slow the drift of a boat with no power, keeping you in an area, allowing searchers to cover less water in order to locate you.

I don’t know how many times drift socks have saved the day for us, allowing our crew to film and fish in some of the windiest of conditions.

A few years back, we were on Mille Lacs in Minnesota, scheduled to be on the water four days and once we arrived, the weather forecast didn’t look good. The weather forecast indicated we’d be facing winds up to 30 MPH with gusts up to 40 MPH, which makes fishing tough and filming almost impossible.

The first morning we weighed our options and came up with the only logical answer and that was to launch the boats, look for a productive area where the water was not too rough and fish using our drift socks.

When we arrived at the area, we planned to fish, other boats were there, those with drift socks, were working the area, catching a few fish, those that did not were bouncing through the area at beak neck speed and if they were lucky, taking a fish every third or fourth drift.

We put out the drift socks and almost immediately started catching fish, allowing us to film as our pace slowed, with a lot less bouncing around.

There are numerous ways drift socks are used, the only way that they’ll not work is if you do not use them.

If you are looking for a way to fish in the wind and to control your boat, you may want to try drift socks.

Gary Howey, Hartington, Nebraska, originally from Watertown, South Dakota, is an award-winning writer, producer, broadcaster, former tournament angler, fishing and hunting guide and in 2017 inducted into the “National Freshwater Fishing Hall of Fame”. He developed and was the Producer-Host for 23 years of the award winning gary Howey’s “Outdoorsmen Adventures” television series, and his weekly Of the Outdoors columns appear in newspapers in Nebraska, South Dakota, Minnesota and Iowa, he’s Host of the award-winning “Outdoor Adventures” radio program carried in Nebraska, South Dakota and Iowa on Classic Hits 106.3, ESPN Sports Radio 1570, KWYR Country 93 AM and Magic 93 FM, As well as on KCHE 92.1 FM in Northwest Iowa.  If you’re looking for more outdoor information, check out www.GaryHowey’soutdoors.com , and www.outdoorsmenadventures.com, with more information on these Facebook pages, Gary Howey, Gary E Howey, Outdoor Adventure Radio, Outdoorsmen Productions and Team Outdoorsmen Productions. The Outdoor Adventures television show is available on numerous Independent markets, and the MIDCO Sports Network.

← Prev: Improving your Chances for Deer Quality and to Hold them on your Property    By gary Howey Next: Protection from what’s “Bugging” and “Burning” you up in the outdoors By gary Howey →