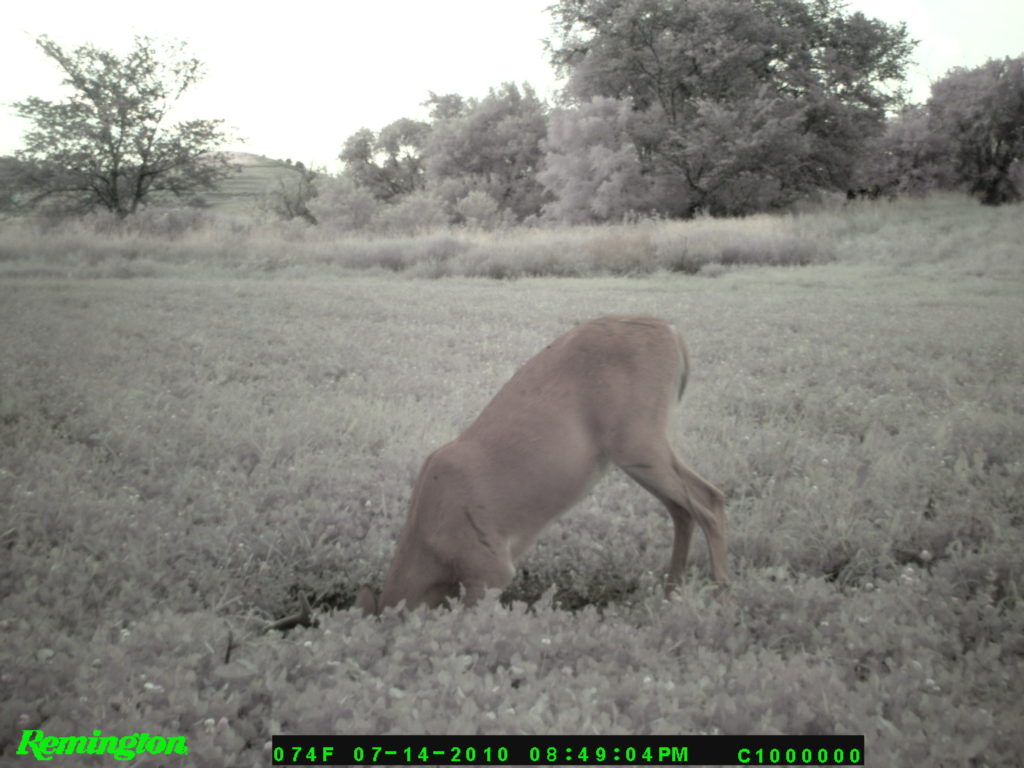 If the deer find a location where they can obtain needed minerals, they’ll use it, as this buck had, digging deep to get  to them.

In order to have a healthy deer herd, to hold them on your hunting property, there’re several things’ they need to keep them from moving onto the neighbors, they’re: cover, water, minerals and food.

As far as cover goes, most areas that hunters are set up on, have cover, which include wooded draws, cornfields. CRP acres, creek bottoms, shelterbelts and weedy areas, where I hunted, there was plenty of cover, which included all of those areas mentioned above.

Another thing you can do to make your hunting area more attractive, is to create additional cover, by partially cutting down a tree, leaving enough bark on one side of the tree so it’s still being nourished, which allows the tree will green up.

This creates a downfall that still offers enough cover for the bucks to lie behind, giving them a safe location, allowing the buck to view his surroundings and use his sense of smell to escape danger.

Water is something your land has to have, a creek, pivot tracts and low-lying bottoms, so the deer won’t go off your place to get a drink.

There wasn’t a water source on the land I hunted and the deer needed to make a long trek to get it.

Because of this, I installed one, hauling in a 300-gallon plastic water-tank that I sank halfway into the ground close to the deer trails.

In order to get water into the site, I used a large, water tank hauled on my trailer with water from a nearby well, and every two weeks or so, to keep the water fairly fresh, I drained the tank, refilled it with fresh water, giving the deer and other wildlife a place to water.

Deer are going to need certain minerals in order to develop good racks, many of the minerals can be obtained from the soil, while others may not be available.

Mineral licks can be very important in order for your deer herd to reach full potential, that’s why I added several RAKS mineral licks to the property.

RAKS has always worked for me and in as little as three years, made a tremendous difference in the deer herd.

It’s a simple process and well worth the labor of putting it in, as it can be established using only a shovel.

The best place for mineral licks is adjacent or close to one of the deer trails, making it easy for the deer to come to it.

With the shovel, all that needs to be done is to remove the grass and vegetation on the ground in an area about two feet by four-feet area and discard it, next, use the shovel to loosen up the soil.

Once that’s done, I mix my RAKS minerals in with the soil, mixing it well and topping it off with a small amount of water, allowing the RAKS scent to permeate the air, drawing the deer into the lick.

If the lick is being hit hard, I’ll cautiously make my way into it to refresh it with some fresh RAKS minerals.

One of my photos shows a buck which has dug down to his shoulders, in order to get the remaining RAKS mineral to get every bit of the minerals he craves.

If your one of those lucky ones, whose land has a lot of the minerals in the soil, the deer may hit it the lick intermittently, but if the deer need of certain minerals, they’ll go to extremes to get it, as the one in the photo is doing.

Mineral licks are an excellent location to set up a trail cam, as it gives you an opportunity to see what deer are using the site.

In the spring and summer, deer have plenty of food at their disposal, but as the crops and fields are harvested, just prior to cold weather, food gets scarce and once winter sets in, it’s hard on all wildlife as their food sources have dried up.

Food plots, go a long way in helping wildlife deer and other wildlife through the tough times with late summer or early fall being a good time to plant, brassica food plots and if they receive enough moisture and sun light, it should be ready for the opening archery season.

Food plots are another great location for game camaras, installing them on the trails leading to and coming from your food plot.

All wild animals, like man are creatures of habit, taking the easiest path to get to where they’re going,

If you’re out hiking, you’ll go out of your way, to look for the clearest, easiest way to get to the top of a hill and all wild critters will do the same, deer, instead of beating their head and racks up in the low hanging branches on narrow trails, look for a path that’s more open.

Since this makes sense, why not work on the trails through the cedar and timber that the deer will use going into and coming out of the cover.

If you have a few trails leading in and out of the heavy cover, it’s best to follow the trail to see if its one where big bodied buck with large rack could easily get through.

As mentioned above, deer will take the easiest path through the cedars and trees, so you want to make sure the buck can get down the trail without banging its antlers on low hanging branches or places on the trail where the trail isn’t wide enough for the buck to pass through.

Once I’ve made my inspection of the trails, I’ll open it up by trimming overhanging branches and widening it, making it easy for the buck to get through.

Once I’ve completed this part, I’ll strategically attach my tree stand to a tree overlooking the trail or place my deer house at a location where I can easily see the buck as he comes and out of the trail.

With the brush, branches and other debris that blocked the main trail, I’ll place it on other trails, blocking those I don’t want the buck to use.

If you find a trail along the bottom towards your stand, that zig zags around obstacles such as bush and thistles and small trees, you could give the deer a more direct route by clearing and improving those trails by thinning the brush, allowing the deer to stay straight on the trail as it comes your way.

There are times, when Mother Nature does a great job for wildlife, but on those occasions where there’s something missing, it’s a great idea to help Mother Mature out, making the property you’re hunting much more attractive to the deer and other critters.

He developed and was the Producer-Host for 23 years of the award winning gary Howey’s “Outdoorsmen Adventures” television series, with his weekly Of the Outdoors columns appearing in newspapers in Nebraska, South Dakota, Minnesota and Iowa, he’s Host of the award-winning “Outdoor Adventures” radio program carried in Nebraska, South Dakota and Iowa on Classic Hits 106.3, ESPN Sports Radio 1570, KWYR Country 93 AM and Magic 93 FM, As well as on KCHE 92.1 FM in Northwest Iowa.  If you’re looking for more outdoor information, check out www.GaryHowey’soutdoors.com , and www.outdoorsmenadventures.com, with more information on these Facebook pages, Gary Howey, Gary E Howey, Outdoor Adventure Radio, Outdoorsmen Productions and Team Outdoorsmen Productions. The Outdoor Adventures television show is available on numerous Independent markets, and the MIDCO Sports Network.

← Prev: Deadwood, S.D. were Outdoor Activities Abound as well as History of the old West By gary Howey Next: Fishing in the Wind, Drift Socks are the Key By gary Howey →