Fishing Line, And other Dangers To Fish, Wildlife, Boat Motors and our Environment 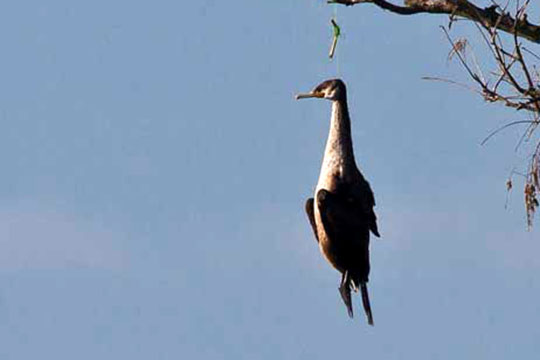 Discarded fishing line when not disposed of properly, removed from the shoreline or water and recycled is a danger to numerous birds and animals. This Cormorant as well as other birds can became tangled in discarded fishing line, resulting in their death. (Contributed Photo)

We were fishing below Gavin’s Point Dam, with a very slow and subtle bite taking place, in order to detect a bite, I needed to watch my line, keeping an eye on it to note any change where it entered the water.

The line, moved slightly off to the side and as I raised my rod, felt the added weight of a fish, I set the hook hard and after a short fight, my partner slipped the nest under a good size drum.

As we pulled the fish from the net; we saw another hook in its mouth, with around eighteen inches of monofilament line dangling down in the water.

Pulling the line out of the water, there was a second fish, an eel pout, wrapped up in the line, with the line wrapped so tightly around the fish, it was cutting deeply into the fish’s skin.

This scenario probably couldn’t be helped as the line was broken by the drum and drug around until the second fish became entangled in it, but there are other instances where fish, birds and other animals, especially if the line was disposed of along the shoreline as it creates problems for birds that walk through it when the line becomes wrapped around their legs and if not removed can lead to their death, this and other birds’ deaths could be saved by simply disposing of the line properly.

Line in the water can also be a huge problem for anglers and boaters as it can easily become tangled and wrapped around you boats prop, trolling motor or Jet ski.

If the line becomes wrapped around your propeller, it can work its way underneath, melt, becoming hard,  which damages the seals on the motor shaft, the seals that keep water from entering and damaging your lower unit, which prevent water from leaking in and oil leaking out of the lower unit.

This usually happens when a fisherman discards old, unwanted fishing line in the water, thinking that it won’t harm anything as it settles to the bottom, which isn’t true, as it floats along just under the surface and hard to see, there’s a good chance that it will become caught by your boat motors prop and get caught behind the prop where the gear case seals are located.

In many cases, unless the angler or boater does a scheduled maintenance where they check these things, it’s unnoticed until the boat motor locks up, ruining with the lower unit.

Recycling monofilament fishing line, one of the most common lines used by fishermen, is very important as it takes up to 500 years before the line starts to show any evidence of breaking down, starting to decompose.

Those fishing line that’re recyclable include, monofilament or fluorocarbon, as well as those lines that are colored, while the braided lines aren’t recyclable, they need to be disposed of properly.

Recycling fishing line is very important, I remember several years ago where Berkley was one of the first line companies to have recycling bins in mass retailers, bait & tackle shops as well as at some located at the more popular fishing waters.

Besides these groups, your state Game, Fish and Parks may have information on recycling points in your area as well.

The next time you’re out and about, look for line recycling bins and if you don’t get to those locations often, stash your line in a container at home until you feel you have enough to turn in to the recycling points.

Much of these problems could be eliminated if people would pick up after their selves as it’s not only fishing line that harms our environment, it’s other plastics & Styrofoam we see in cups, plates and even bait buckets take hundreds of years to decompose.

One example of this is the plastic used to hold energy drinks, beer and soda cans and bottles together, this item could last up to 500 years before even beginning to break down.

I hate to go to a friends pond, lake or river and see all of those things that have been discarded that can and would harm our environment and also that anyone would think I was the one leaving all of the trash, line and plastic items behind by me, so numerous times, I’ve  carried out not only my trash, but that of others, who may not know about the dangers to our environment with the things they leave behind the shoreline and in the water, I surely hope it isn’t because these folks don’t care about our environment and only worry about themselves as that would surely be a dark day for all of us!

Gary Howey, Hartington, Neb is a former tournament angler, fishing & hunting guide, an award-winning writer, producer, and broadcaster, inducted into the “National Freshwater Fishing Hall of Fame” in 2017. He developed and was the Producer- Host of the Outdoorsmen Adventures television series for 23 years and is the Co-Host of the award-winning Outdoor Adventures radio show. The new Outdoorsmen Adventures television series begins its thirteen-week season on Saturday April 4 at 11:00 am on KCAU-TV, Sioux City, as well as on numerous Independent stations throughout the upper Midwest.  If you are looking for more outdoor information, check out garyhoweysoutdoors.com, outdoorsmenadventures.com and like Gary Howey’s Facebook page and watch the shows on the MIDCO Sports Network, News Channel Nebraska and on the Outdoor Channels www.MyOutdoorTV.com